This Day In History: The Spanish-American War Was Ended (1898) 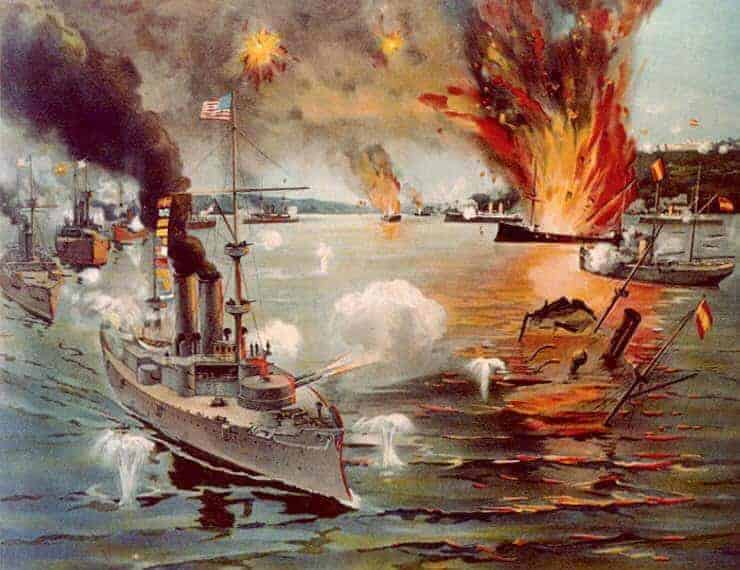 This Day In History: The Spanish-American War Was Ended (1898)

This day in history the Spanish-American War came to an end with an armistice. The war was a great victory for American and allowed it to expand its powers the Pacific and the Caribbean. The war was a disaster for the Spanish and it brought to an end their400-yearr empire in the Americas. The war between Spain and America was brief. The War comes to an end when Spain surrenders Cuba, Puerto Rico, and the Philippines to the United States.
The cause of the war was the explosion of the USS Maine in a Cuban port and anger over Spanish treatment of Cuban rebels.
The repressive measures that Spain took to suppress the guerrilla war, such as herding Cuba’s rural population into camps or into slums in towns angered many Americans. The newspapers whipped up anti-Spanish feeling. The explosion on the USS Maine was seen by many in America as an act of sabotage by the Spanish. The newspapers claimed that it was an act of Spanish aggression and called for a war against that nation. Much of Congress and a majority of the American public had little doubt that Spain was responsible, and wanted a war to be declared by President McKinley.

The US declared war on April 25th and sent armed forces to Cuba, where they sided with the Cuban rebels. In a series of battles, the Americans swept the Spanish from the battlefield. It was here that Teddy Roosevelt and the Rough Riders became legends.the ten-week war was fought in both the Caribbean and the Pacific. US naval power proved decisive, allowing expeditionary forces to disembark in Cuba against a Spanish garrison already facing widespread Cuban rebel attacks and a yellow fever epidemic.

The Spanish-American War only lasted some ten weeks.

The Americans left Cuba after two decades of at times controversial occupation. American domination of the Philippines was a very bloody affair. Many Filipinos wanted independence, especially in the Muslim south. Philippine insurgents who fought against Spanish rule during the war immediately turned their guns against the Americans. In this conflict, ten times more U.S. troops died defeating the Philippines rebels than in defeating Spain. Eventually, America also withdrew from the Philippines in 1945. However, Puerto Rico and Guam are still dependencies of the United States, since the end of the Spanish-American War.