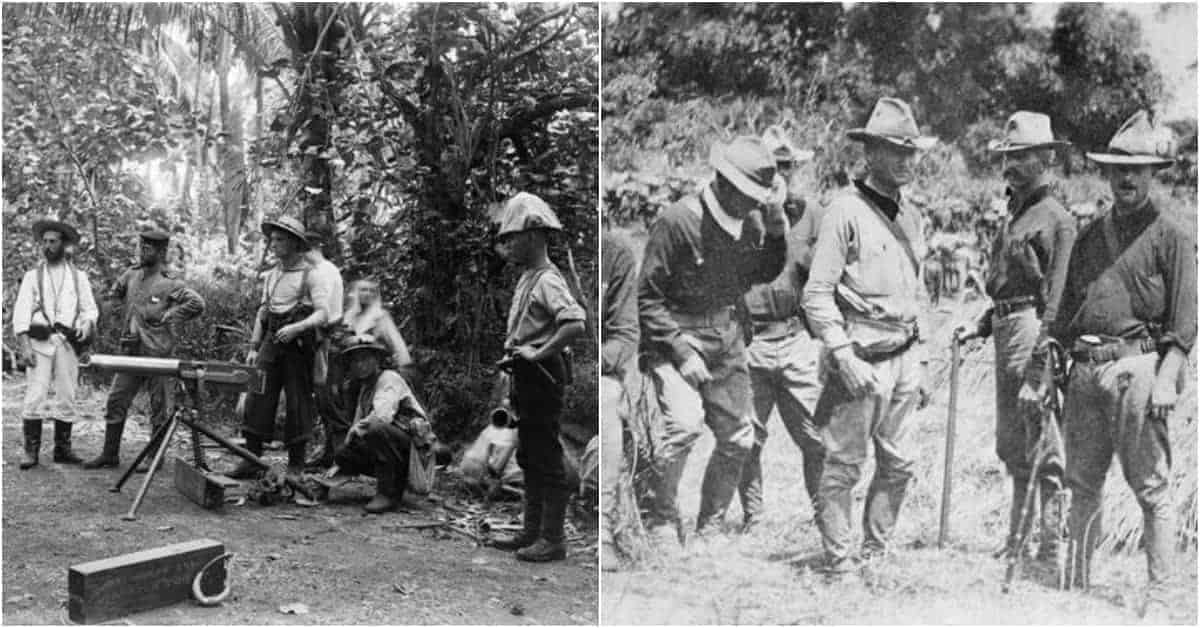 From 1898 through 1934 the United States intervened in numerous nations throughout Central America, South America, and the Caribbean, a series of actions known as the Banana Wars. Because of the strategic importance of trade across Central America, the United States used the century old Monroe Doctrine to occupy Nicaragua with a military force to prevent any European nation from completing a canal across the country.

American occupation began when a rebellion broke out in Nicaragua, and American troops and warships were dispatched to both ensure there were no actions taken against American citizens and businesses and to prevent intervention from Europeans. As several different attempts at establishing a stable Nicaraguan government were tried and failed, American troop levels within the country increased. By 1912, the Nicaraguan government in power had requested American military support containing rebellion within the country and American warships and troops were engaging Nicaraguan rebels.

The United States also assumed most of the control of the Nicaraguan economy, and after suppressing most of the rebellions within the country it retained troops in place to ensure fair elections. American troops were eventually withdrawn to a level of around 100 in 1916, although US warships maintained a watchful presence.

In 1927 American troops again occupied the country in response to another erupting civil war, and by the following spring over 2,000 US troops were deployed there. American troops participated yet again in military operations and in protecting financial assets such as gold mines while ensuring legitimate elections. Americans also trained government troops to assume a larger role in defending and protecting their country.

By the early 1930s, the cost of maintaining an American presence was deemed to be too high in the face of the great depression, the existence of the Panama Canal meant no nation would assume the cost of building another in Nicaragua, and other strategic concerns were arising from Japan and Germany. Other than a token force, by 1932 the United States had withdrawn from Nicaragua.

During the late 1950s, the United States was primarily concerned over the rising threat of secession from Southern states over the issue of slavery. During this period the United States maintained a fairly large – for its time – military presence in the State of Texas, both to protect citizens and property from the attacks of the Cheyenne and other tribes, and to protect the southern border from incursions by Mexican bandits and the troops pursuing them, often indistinguishable from each other by those with the misfortune to encounter them.

Juan Cortina was a rancher and border bandit who raided towns on both sides of the nearly invisible border between Mexico and Texas. When he raided Brownsville in 1859 he set off a conflict with the militia of that town and the Texas Rangers, later supported by United States Cavalry.

This led to several pitched battles, culminating in the Battle of Rio Grande City. After the United States applied diplomatic pressure on Mexico to take action to prevent its citizens and troops from crossing the border, Cortina retreated to the Burgos, and the First Cortina War drew to an uneasy end. In 1861 Cortina returned to his raiding.

By that time Texas had seceded from the United States and the only military units along the border were those of the Confederate States Army, a situation which no doubt encouraged Cortina’s return. Cortina had an eye for opportunity and had agreed to a local alliance with the United States Army to harass the southern border, keeping any booty which he managed to pillage on his raids. After invading Zapata Cortina found himself confronted by Confederate troops and he was roundly defeated, withdrawing back to Mexico. It was his only military action of the Civil War.

The First and Second Cortina Wars are the only known instance of Confederate and Union troops engaging a common foreign enemy, despite it being at different times and circumstances. Cortina was eventually arrested and confined by Mexican authorities, dying imprisoned in Mexico City in 1894.