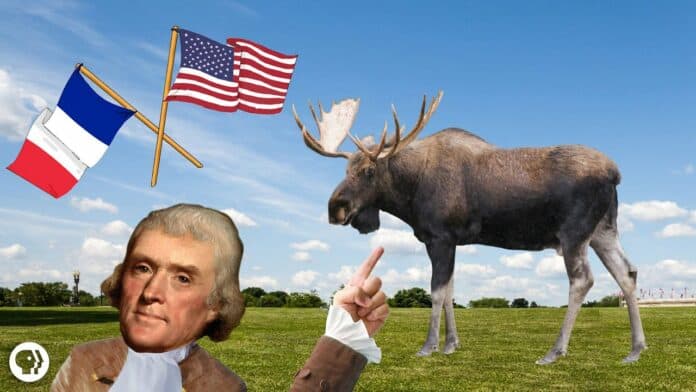 Nowadays, many look around and cannot help but wonder at how bonkers America seems to have gotten. Perhaps they should not be surprised: when seen through the lens of history, America has had a bonkers strain from the very beginning. From the Founding Father who was convinced that black people were white people with leprosy, to the literal bad blood behind America’s greatest family feud, the country has never had a shortage of the strange and the bizarre. Following are forty things about some of the more bonkers bits from American history during war and peacetime.

40. The Ever Changing Thomas Jefferson

When people think of Thomas Jefferson, what usually comes to mind are his major accomplishments, such as The Declaration of Independence, the Louisiana Purchase, and establishing the University of Virginia. When it comes to controversy, what usually comes to mind is the jarring contrast between his soaring rhetoric about freedom, the fact that he was a major slaveholder, and that he had an enslaved concubine, Sally Hemings.

Less known are his weird beliefs and other indicia that make Jefferson come across as a maniac. A genius, to be sure, but a maniacal genius. For example, he went from a huge dog lover at some point in his life, to a dog hater who had all his dogs – and all the dogs of his slaves – killed. He used to be best buddies with John Adams, before turning on and becoming his mortal enemy. He once got into the nineteenth century equivalent of a flame war with some Frenchmen who’d derided the size of American animals, and settled it by shipping a rotting moose carcass to Paris.