18 Photos of the Feud Between the Hatfields and McCoys 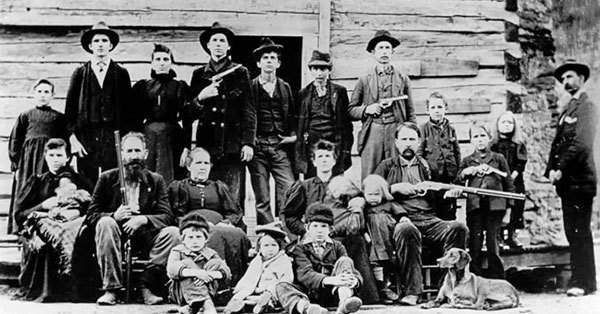 18 Photos of the Feud Between the Hatfields and McCoys

The Hatfield-McCoy feud involved two rural families from West Virginia and Kentucky along the Tug Fork of the Big Sandy River from 1865-1891. The Hatfields, led by William Anderson ‘Devil Anse’ Hatfield lived on the West Virginia side of the river. The McCoys, led by Randolph McCoy, were from Kentucky.

The origins of the feud are rooted in southern resentment of the Union after the Civil War. Both families fought for the Confederacy except for Asa Harmon McCoy, who fought for the Union. On January 7, 1865, Asa Harmon McCoy was killed by a group of Confederate guerillas in his home. The McCoy family believed Jim Vance, Anse Hatfield’s uncle, was responsible.

Thirteen years later, in 1878, there was a dispute about the ownership of a pig. One of the Hatfield cousins had a pig that Randolph McCoy believed to be his. In court, the case was ruled in favor of the Hatfields when Bill Staton, a relative of both families, stated that the hog belonged to the Hatfields. In June 1880, Staton was killed by two McCoy brothers who were later acquitted on the grounds of self-defense.

The feud escalated when Johnson ‘Johnse’ Hatfield, Anse’s son, and Roseanna McCoy, Randolph’s daughter, began a relationship. Roseanna went to live with the Hatfields only to be forced to leave when she became pregnant. Johnse attempted to cross the Tug Fork to meet with Roseanna but he was arrested on bootlegging charges. Roseanna alerted the Hatfields, betraying her family, and Johnse was rescued.

Ellison Hatfield, Anse’s brother, was killed in a drunken brawl with Tolbert, Pharmer, and Bud Hatfield, Randolph’s sons, after being stabbed 26 times before being shot. The brothers were arrested by West Virginia constables before being captured by a Hatfield posse. The three McCoy boys were executed by Hatfields.

The war climaxed when ‘Cap’ Hatfield and Jim Vance lead several members of the clan to Randolph McCoy’s cabin and set it on fire to draw out the McCoys. Randolph was able to escape but two of his children were killed and his wife was left badly beaten.

The Hatfields all had rewards on their heads in Kentucky. A band of bounty hunters lead by Deputy Sheriff Franklin ‘Bad Frank’ Phillips crossed the Big Tug to capture Devil Anse. Jim Vanse was killed when he refused to be taken into custody. The Hatfields had gathered a posse of their own and met Bad Frank and the McCoys in the Battle of Grapevine Creek.

At the end of the battle, the Hatfields were forced to retreat. Eight members of the family were arrested. Seven received life in prison. Ellison ‘Cottontop’ Mounts was sentenced to death by hanging. Only then did the violence cease.

Mvorganizing – Who All Died In The Hatfield And Mccoy Feud?