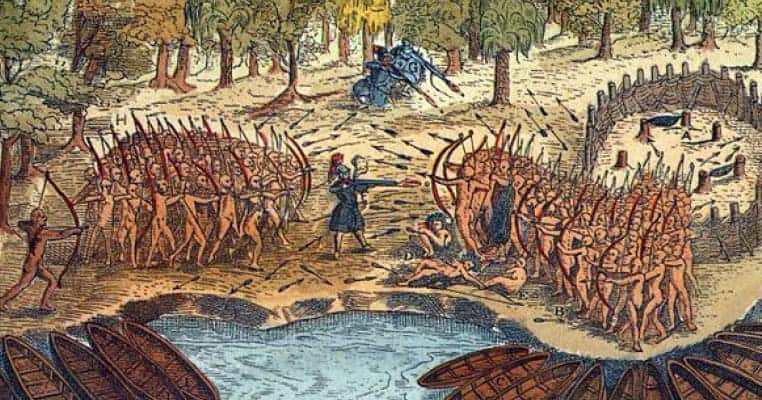 After Christopher Columbus stumbled upon the New World, he set in motion numerous wars for empire that involved European powers. By the mid-1600s, Spain had exploited native populations and Portugal had expanded its African Slave trade into Brazil. The Iberian Peninsula was awash with silver that would make it one of the wealthiest regions in the world. The English, Dutch, and French wanted to take their own piece of the New World’s wealth. They packed ships with explorers and sent settlers to what would become Canada, New England, and New York and saw established the profitable fur trade.

Religious missions also traveled to the New World. Their objective was not furs but to save the souls of the heathen natives. Isaac Jogues was one such person. He suffered years of torture and banishment at the hands of Mohawk Indians who were convinced that all Europeans were evil and full of magic. This is the story of a Frenchman that remained steadfast to his faith while suffering unspeakable torture and as a result became a martyr and saint.

Isaac Jogues was born in Orleans, France in January 1607. At the time of his birth, European powers had begun fighting among each other as they laid claim to parts of the New World. Their purpose was to control all aspects of the land, including indigenous people, and to exploit it for raw materials. In doing so European powers were convinced that they would be able to control trade and commerce, become wealthy beyond their dreams, and build impenetrable navies and armies with which to protect the seas and New World landholdings.

Yet there were some people that had a call to service. Young Isaac Jogues was the fifth child of nine children. His parents were part of France’s growing bourgeois, the middle class. Along with his siblings, Isaac was taught at home by a tutor and then went off to a Jesuit school at 10. He entered into a Jesuit monastery at 17 and received an extensive education and religious training. After he took his religious vows, he prepared to become a missionary. In 1636, at 29, Isaac Jogues was ordained as a priest and traveled to New France. It was his goal to work with the native populations and to spread the word of Jesus among them. He desired to “devote himself to labor” in New France “for the conversion and welfare of the natives.”

Father Jogues did not travel across the Atlantic alone. There were other Jesuits that traveled with him and all were to become missionaries in New France. Jogues was assigned to work with the Huron and Algonquin Indians who were part of the Iroquois League and considered to be allies of France. The Jesuits arrived in the New World and then made their way to Quebec arriving in July 1636. Soon they settled on Lake Huron in the village at St. Joseph and they began their religious outreach.

As the Jesuits settled in to their new village, they began to reach out to the Hurons. This was a slow yet meticulous process. Father Jogues and his fellow Jesuits spent time getting to know the Hurons. They learned about the ways in which the Huron hunted and farmed, they learned about family ties and customs, and they learned their language. Perhaps most importantly, Father Jogues insisted on keeping with the Jesuit tradition of accommodating their ways to that of the Hurons. This was in stark contrast to the violent Spanish conquest of native people in present-day Mexico.

Europeans brought disease to the Hurons. Smallpox and measles killed many who had no natural resistance to these Old World diseases. As early as 1142, the Mohawk, Onondaga, Oneida, Cayuga, and Seneca people formed what the French called the Iroquois League as a way to band together for their own survival. These tribes believed that the Black Coats, named because of the robes that they wore, used magic to kill them with diseases and make their crops fail. The Jesuits, who meticulous acclimated to Huron customs, were able to convince the Huron that they did not possess magical powers, that they would not intentionally harm or exploit them, and that they were there only to “teach them, and to procure them their souls’ health.” Father Jogues lived among the Huron for six years.

Trouble arose when Indians from New England and the Dutch-held colony of New Amsterdam came into New France. For centuries, the Dutch, English, Spanish, and Portuguese had been battling each other for control of the Atlantic World, New World lands, and all of the riches contained within. These battles for empire bled into control over native peoples. All European settlers and explores had committed atrocities that would shock even 21st century sensibilities. For the Dutch and the English, all they had to do was convince the Mohawk and others that wherever the French and Jesuits went they “brought calamity” with them.

The Huron acted upon the kidnapping and slavery rumors and turned violent toward Father Jogues and French settlers. With violence coming from both the Huron and the Mohawk, the Jesuits were forced to flee St. Joseph and they wandered from village to village. At each place they were greeted with hostility. As despair took over, the Jesuits decided to abandon any prospect they had of establishing a mission and return home to France. A miracle happened in 1639 when Isaac Jogues was entrusted to build Fort Sainte-Marie which would provide the Jesuits and settlers with protection from hostile native peoples. Returning from Quebec City, the Mohawk nation attacked and took the Christians captive.

The Mohawks tortured their captives. They took Father Jogues and ripped out his finger nails, gnawed on his bare fingers until bone showed, and hit him with sticks. He and his fellow Christian captives were paraded single file through a gauntlet of Mohawks who were armed with sticks and rods. A captive Algonquin woman was forced to cut off Jogues thumb. The captives were then placed on a platform where Mohawks could yell and throw objects at them.

When night came, the prisoners were placed in a cabin and tied spread eagle at their wrists and ankles. Children were permitted then to take hot coals and throw them onto the captives causing excruciating pain. Over the next few days, they were marched from village to village. At each village, members of the Iroquois Confederacy took sticks and jabbed them into the wounds of the captives and flogged them. In one village, Father Jogues was hung from a wooden plank and left to die. An observer took pity on the Father and cut him down.

The Mohawk did not release Father Jogues. Instead, he was considered a prisoner at large meaning he could not integrate into Mohawk society nor could he live in any village. Anyone who was caught helping him would be executed. Father Jogues was forced to wander alone in the woods with nothing but his black robe starving. Yet, throughout his ordeal he remained true to his faith and spent many hours each day in deep prayer. Even in physical distress he was able to save a pregnant woman who fell into an icy river, he absolved people of their sins, advised in religious matters, and even baptized the man who had cut him down from the wooden plank.

Finally in the autumn of 1643, the Mohawks took Jogues to a town where he escaped. Father Jogues went to New Amsterdam where he awaited a ship to take him back to France. This made him the first Catholic priest to set foot in Manhattan. Upon his return to France, Pope Urban VIII gave Jogues dispensation allowing him to hold mass with his mutilated hands. But life in France was not for Father Jogues. He returned to New France as a co-Ambassador to ensure the fragile peace between the French and Huron, Algonquin, and tribes in the Iroquois Confederation.

Things did not go as planned. When Father Jogues arrived in New France the indigenous people were dying from yet another outbreak of smallpox and measles. Mohawk warriors believed the Black Coat was full of magic because he had a mysterious familiarity to the topography of the Iroquois lands. Then on October 18, 1646, the Mohawks killed Father Jogues with a tomahawk. They threw the priest’s body unceremoniously into the Mohawk River and let if float downstream and left it to the elements.

Father Isaac Jogues was a martyr. His devotion to his faith while forced to wander in the wilderness mirrored that of Jesus while on the Cross. As a martyr, Father Jogues gave hope for those suffering in captivity for their religious beliefs. In 1930 he was canonized. There are numerous monuments in North America that honor Saint Isaac Jogues including the door on St. Patrick’s Cathedral in Manhattan.