The Remarkable Story of Eyam, the Village that Stopped The Plague of 1666 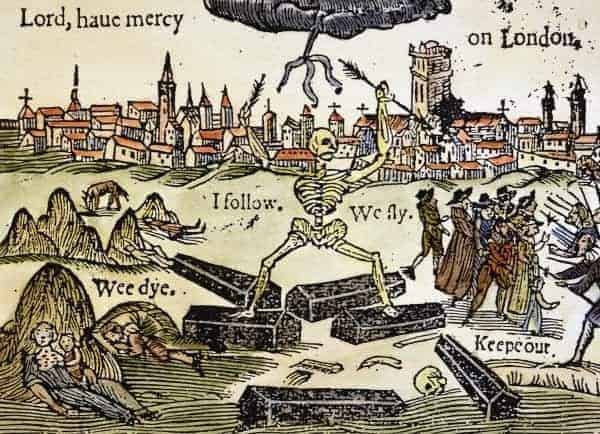 The Remarkable Story of Eyam, the Village that Stopped The Plague of 1666

The pretty village of Eyam nestles in the hills of the Derbyshire peak district. Once known for its farming and lead mining, modern Eyam is a commuter village, with many of its 900 residents making the daily journey to nearby Manchester and Sheffield. It’s not hard to understand why these city workers prefer to make their home in Eyam, for the village maintains a quintessential picture-postcard prettiness. Its quaint cottages, ancient church and seventeenth-century manor house are also a draw for the thousands of annual visitors to the Peak District. However, this is not the only thing that attracts visitors to Eyam.

About half a mile out of the main village is a curious feature: a wall made out of rough, flat stones, punctuated with unusual openings whose edges have worn smooth with time. The wall is unique for it is the relic of a tragedy and triumph – from Eyam’s past. For in 1666, the people of Eyam took the unprecedented step of isolating themselves and their village from the rest of Derbyshire when the village became infected by the last outbreak of bubonic plague in Britain. This brave action devastated the settlement, but at the same time earned Eyam the reputation as the village that stopped the plague.

In 1665, plague once again struck mainland Britain. Some historians believe it took root as early as late 1664, held at bay by the winter months. However, once the winter was over, the plague spread in earnest. The first place it afflicted was the poor London suburb of St. Giles in the Field. From there, the pestilence made its way through other overcrowded, impoverished areas of the city: Stepney, Shoreditch, Clerkenwell and Cripplegate and finally Westminster.

The plague took between four to six days to incubate. By the time its symptoms appeared, it was too late. Victims developed a high fever and vomiting. Excruciating pain wracked their limbs. Then came the tell-tale buboes which formed in the lymph glands, which could swell to the size of an egg before bursting. Infected houses were sealed, the doors marked with a red or white cross with the words “Lord have mercy on us” daubed beneath. Samuel Peeps noted how daytime streets were strangely silent. At night, however, they were active as corpses were collected and carried away in carts for disposal in the great plague pits dug about the city.

People believed that the plague was airborne, possibly because one of the first signs of the infection was that the victims could smell a sweet, sickly fragrance about them. This smell, however, was not the plague but the scent of the victim’s internal organs which were collapsing and rotting. However, because of this telltale odor, people began to carry posies of flowers which they held to their noses to keep the plague at bay. The custom became incorporated in the children’s song about the Great Plague, “Ring a Ring of Roses.”

When the scale of the epidemic became obvious, anyone who could afford to leave London did so. By early summer 1665, the King, his court, and parliament had all fled, leaving behind those citizens who could not afford to abandon their homes and livelihoods. These fortunate few did not return until February 1666 when the plague began to fizzle out. However, out of those left behind, records indicate that between 1665 and 1666, out of a total population of 460,000 as few as 68,596 or as many as 100,000 people died in London of the contagion.

However, although people remember this plague as The Great Plague of London, it afflicted other areas too. Ports such as Southampton were stricken and gradually, aided by trade and by those fleeing infected areas, the plague made its way north. It passed through and infected the towns of the Midlands and then hugged the northeastern side of England, arriving at Newcastle and York. However, rural Derbyshire and the northwest remained relatively safe until, in August 1665, the plague reached Eyam.

The Plague in Eyam

In the summer of 1665, Eyam was a prosperous village, six miles north of the town of Bakewell in Derbyshire. It was home to some 344 people, who made a living through farming and lead mining, which formed the settlement’s main source of wealth. There was nothing to mark Eyam out from any of the villages in the area. Then in August 1665, this all changed. For despite the dangers, the local tailor, Alexander Hadfield foolishly sent his assistant, George Vickers to London for cloth samples. When Vickers returned, he brought back more than material.

The box containing the cloth that Vickers brought back from London also harbored plague-bearing fleas. Their first victim on September 3, 1665, was Vickers himself, followed by the rest of his household. In the first three weeks of the plague’s residency in Eyam, it took the lives of six of its residents. By the end of the year, 42 villagers were dead. Then, inexplicably, it seemed to peter out. The people of Eyam questioned whether they had been struck down with plague at all. However, once winter had passed, in early 1666, the disease revived itself. In May, two people died. By the time June began, Eyam was in the jaws of a full-scale epidemic.

The villagers took every precaution to keep the plague at bay. They burned rosemary and wore masks stuffed with herbs. Doors and windows were kept closed so the plague spores could not enter and fires were lit in the village streets to drive them away. When they realized that smoke and herbs would do little good, some people even took to sitting in the sewers, in the hope that the foul odors would succeed where sweet had not and drive off the disease. However, it was all in vain.

As the plague took hold and the death toll began to rise, all those who could depart the village. The local vicar, William Mompesson sent his children away to stay in Sheffield although his wife, Elizabeth elected to stay with him and lost her life for her pains. However, it was not just the gentry that abandoned Eyam. One family of tradesmen, the Sheldon’s also left the village.

However, most people were not willing to risk their livelihoods and so took the chance to stay. As the suffering in the village grew, some people began to consider what would happen if the plague moved on from Eyam. This concern led the people of Eyam to take a brave and unprecedented step for such a small settlement.

To prevent the spread of the plague to other towns and villages, Eyam decided to quarantine itself. Two men were responsible for helping the villagers make this momentous decision. One was Eyam’s Anglican vicar, William Mompesson. The other was Thomas Stanley, the former rector. Stanley had been replaced in 1660 by Mompesson’s predecessor because of his Puritan views. However, he continued to live in Eyam. While Stanley and Mompesson’s interpretation of their Christian faith differed, they were united in their purpose to stop the plague.

Mompesson and Stanley ordered the villagers to build a stone perimeter wall half a mile away from the village. No one from within Eyam was allowed to cross the boundary until the settlement was free of plague- even those without symptoms. To ensure that the villagers did not starve, arrangements were made for merchants from local towns and the Earl of Devonshire at nearby Chatsworth House to leave goods and medicine along the southern boundary of Eyam. In return, the villagers paid for goods with coins disinfected in vinegar which they deposited in the hollows of the stone wall.

Stanley and Monpesson were successful in convincing the villagers to observe the quarantine. During the period Eyam was sealed off, only two people tried to leave the village. One, a woman broke quarantine so she could attend the market in the town of Tideswell just five miles away. However, once she arrived at her destination, people recognized her as a resident of Eyam and drove her away with missiles of food and mud and cries of “The Plague, The Plague.” Perhaps the villagers of Eyam did not leave because they knew there was no sanctuary for them in the outside world.

Throughout the summer of 1666, conditions in Eyam began to decline. By early August, death was a daily event. As more villagers died, the neglect grew. The fields were left untended and repairs were ignored. When the stonemason died, the villagers had to carve their own gravestones. They also had to bury their own dead. One farmer’s wife, Elizabeth Hancock buried her husband and all six of her children in the space of eight days. She was forced to wrap them in shrouds and drag them through the streets by their feet, burying them in the fields that surrounded the village in the area known today as The Riley Graves.

The final death in Eyam was on November 1st 1666. By this time, out of the 344 villagers, 260 had died. The houses of those wiped out still stand, remembered today as the “Plague Cottages.” Each is marked with a green plaque that lists the members of each family lost to the plague. As for those that survived, except for Reverend Monpesson who resigned his living in 1669 and left Eyam never to return, they took up their lives again. Their immunity was due to a plague-resistant chromosome, rather than prayer or the smoking of tobacco as was believed at the time. However, they had achieved their objective. Because of Eyam’s sacrifice, the Great Plague spread no further in Derbyshire.

Where Do We get this stuff? Here are our Sources:

Living with the plague, BBC Legacies (UK History Local to you: Derby)

History Collection – Thousands Died From the Black Death in 1666, Leaving Behind Haunted Plague Pits in London

History Collection – Dancing Plague: A Plague in the Middle Ages Caused People to Dance Themselves to Death