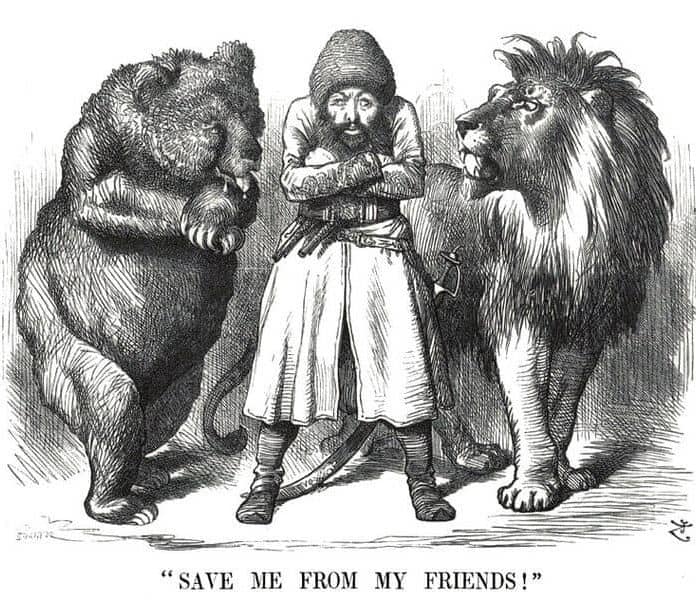 It was said that the sun never set upon the British Empire, which stretched across North America, the Pacific, across Asia to Africa, and throughout the Atlantic, girdling the world under the Union Jack. The British Empire at its peak controlled 13,700,000 square miles, nearly a quarter of the land area on earth. It was the largest empire in history and despite the vast distances which separated its territories from the Colonial Office in England, it was dominated by the British Navy. Britain controlled the sea lanes of the world and with them access to the trading ports. This provided trading advantages enjoyed by British manufacturers and merchants.

Over time, many of the nationals controlled by the British exhibited displeasure with British Colonial rule. Rebellions, uprisings, and outright revolution against British authority took place throughout the life of the empire, and with the outstanding exception of the thirteen American colonies were put down harshly. During many of these revolts the British dealt with natives in terms which were often unbelievably cruel, rivalling the worst atrocities of the Romans before them, and the Nazis after. In 2012 the British Foreign Office admitted that thousands of records documenting atrocities committed by the British Army and colonial service were deliberately destroyed, and the records which remained were illegally kept hidden from the eyes of the media and the public.

Here are just a few of the atrocities committed during the reign of the British Empire, known to history as the Pax Brittanica.

The Mau Mau Uprising and the Kikuyu

What is now Kenya had the honor of being under the control of the British Empire beginning with the arrival of the Imperial East Africa Company in 1888. The British built a railroad through the country, which became known as British East Africa, using imported labor from India, and built large agricultural estates taking advantage of the fertility of the soil and the tropical climate. In 1920 the country was designated as a British colony and named Kenya for its tallest mountain peak. British farmers grew wealthy over the production of coffee and tea, using the native Kiyuku people as itinerant laborers.

As early as the 1890s there was resistance to the British opening of the lands and oppression of the natives. British troops stationed in the colony suppressed these uprisings harshly. In 1908 Winston Churchill expressed concern about the violence in East Africa, but not over the nature of the resistance or the harsh methods used by the British to control the natives. Instead he was concerned over the reputation of the British should word of atrocities being committed reach the House of Commons. Churchill did refer to the many victims as “helpless people”.

Through the 1920s and 1930s the British Colonial government classified the native workers as being in one of three categories; squatters, contractors, or casual. The British enacted ordinances which eliminated the rights of squatters, effectively forcing them to work for British settlers rather than for themselves, and kept labor costs low. Most of the laborers were of the Kikuyu people, and among them there was rising discontent with the British settlers, who paid them poorly, offered little in the way of medical care, and housed them in primitive conditions.

The Mau Mau were both a political organization and a paramilitary group which rose in revolt during the 1940s, eventually breaking into open warfare with the British and other Imperial troops in 1952. The majority of the Mau Mau revolutionaries were Kikuyu. After declaring an emergency the British pursued a policy of divide and conquer. Civil liberties were suspended. Kikuyu were rounded up into “work camps.” One and a half million people were held in camps or villages surrounded and fortified by British troops. The camps bore signs which read, “Labor and Freedom.” Torture and mass executions were common, including men being anally raped with bottles and other devices by guards.

Some Kiyuku were dragged by military vehicles until their bodies broke into pieces. Others were mauled by guard dogs before being executed. How many died in the British camps is unknown because the Colonial Office and Foreign Office connived to destroy the documentation. Officially released British records indicated that there were only 80,000 Kikuyu and other tribesmen incarcerated in the camps during the Mau Mau uprising, but recently discovered documents and other records indicate that nearly the entire civilian population was placed in the camps.