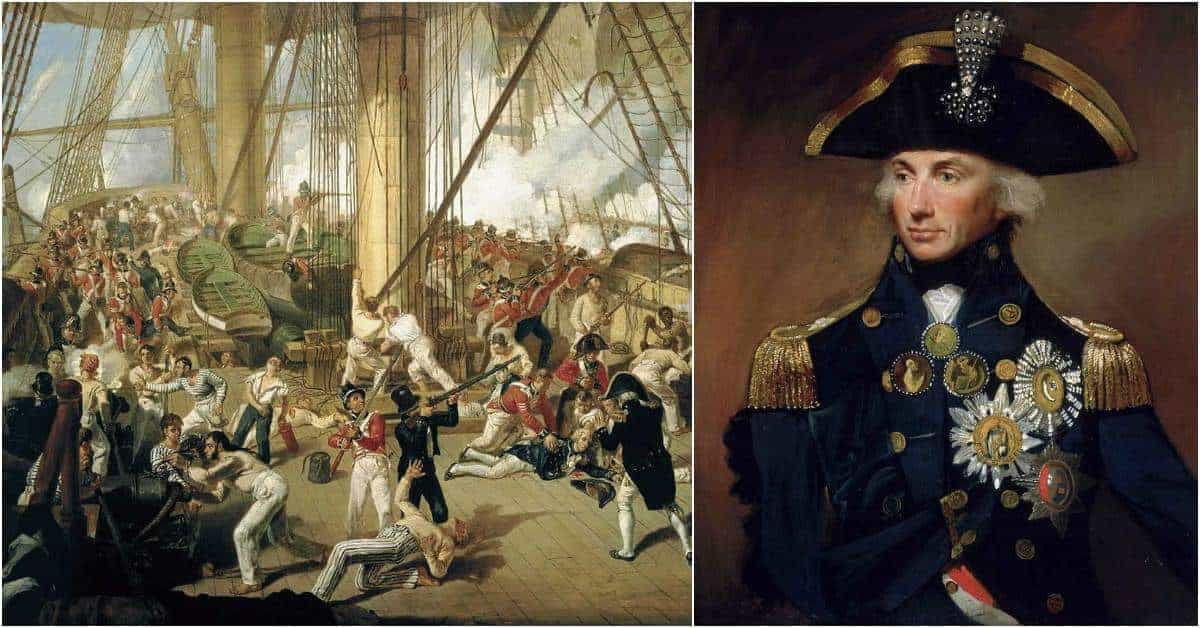 It’s not often that celebrated national heroes are treated unceremoniously after they’ve shaken off their mortal coil. It’s rarer still that such treatment might befall someone so beloved that they had a 50-meter tall column named after them, atop which stands their statue, situated in the middle of London’s Trafalgar Square. Yet this is precisely what happened in the case of Lord Admiral Horatio Nelson: not because of any animosity towards his mind, but because sometimes—especially in times of war—needs simply must.

Despite his modest birth, Horatio Nelson enjoyed a phenomenally successful military career, one that came through personal merit rather than privileged entitlement. First taking to the seas in the early 1770s, aged just 12, he served in the merchant navy, took part in a failed scientific expedition to the Arctic, and campaigned against the Americans during the War of Independence, traveling as far afield as the Falklands.

By the age of 20, he was in command of his own ship, the HMS Albermarle, which he used to great effect, taking several Spanish and French ships as prizes in the West Indies. By the outbreak of the French Revolutionary Wars in 1792 and the Siege of Toulon in 1793 (military engagement in which a young Napoleon Bonaparte was also involved) Nelson was really starting to show his remarkable commanding genius. His first real crowning moment, however, was to come at the Battle of St. Vincent (February 14, 1797).

During the battle, Nelson decided to break line with the commander of the British fleet, Admiral Sir John Jervis. Had this lost the battle, this would have earned him a court-martial for disobeying orders. As it happened, however, Nelson’s quick thinking saved the British from certain defeat at the hands of the numerically superior Spanish. Nelson won a knighthood for his actions. And he would go on to build on his success the next year in the warm seas of the Mediterranean, though not before suffering some setbacks.

Nelson was badly wounded in July 1797 while assaulting the Spanish port city of Santa Cruz de Tenerife. A whiff of grapeshot shredded his right arm, and most of what was left of it had to be amputated to prevent infection from spreading. Yet he didn’t let this deter him: from his surgery bed he continued to issue commands, and would later joke about the matter, referring to what was left of his amputated arm as his “fin”.

Now holding the rank of rear admiral, Nelson won a heroic victory at the Battle of the Nile (1798). Nelson’s fleet scuppered Napoleon’s navy under the command of François-Paul Brueys d’Aigalliers, stranding the French army in Egypt. The crushing victory against the French marked the first step in establishing British dominance of the seas. It also made Nelson an undisputed hero, the darling of Britain, and the man who was to be entrusted the command of British forces in the Mediterranean. As fate would have it, this would also make him the man to face off against the French and Spanish at the Battle of Trafalgar on October 21, 1805.

Nelson’s heroic victory at Trafalgar marks a watershed in British naval history. After Trafalgar Britannia truly did “rule the waves”, dashing Napoleon’s hopes of controlling the English Channel and mounting an invasion on British shores. Despite the importance of the battle, however, few would have imagined Nelson could win it. The Spanish outnumbered the British with 33 ships against 27. But Nelson’s tactical nouse was going to make sure that cunning, rather than numbers, determined the outcome.

Rather than arranging his ships in the line, as was customary, Nelson ordered his fleet to form up in two perpendicular columns, cutting through the enemy’s line at two crucial points in the centre. As the battle got underway Nelson refused to remove his official insignia—which made him an easy target for enemy sharpshooters—but remained on deck with the appropriately named Captain Hardy, exhorting his men to fight bravely in spite of the bloody carnage around them. Yet his bravery was to be his undoing.

At around 1 pm, roughly an hour after the battle had started, Hardy turned around to see that Nelson had been struck by a musket ball. Fired from the mast of the French ship Redoutable, the ball had passed through the admiral’s shoulder and lodged deep within his spine. In the throes of agony, the admiral gasped, “They finally succeeded, I am dead”, before being carried below decks to the surgeon’s quarters.

Before the battle, Nelson had sent a signal from his flagship reading, “England expects that every man will do his duty.” The sentiment clearly had just as much impact on the admiral who sent it did on the victorious sailors under his command. For as the battle died down around him, Nelson’s uttered his last words: “Thank God that I have done my duty… To God and my country.”

This, in short, is the story of Horatio Nelson’s life. But this story doesn’t end with his death; it just gets more bizarre. As smoke lifted over the seas off Cape Trafalgar, the late admiral’s men found themselves in the rather sticky predicament of how to transport their beloved leader’s body back to Britain for proper burial. The crippled, prisoner-laden fleet was still a good two-month journey away from Britain. If Nelson’s corpse was going to make it, they would need to get creative.

The man behind the plan was Nelson’s surgeon, an Irishman named William Beatty. As a nineteenth-century naval surgeon, he had remarkable success rates. Of his 102 casualties at Trafalgar, 96 had survived. He had also had to amputate 11 men, 9 of whom had lived to tell the tale. Consider that, at the time, average survival rates post-amputation were around 33 percent and this sings praises of his abilities.

Beatty suggested that Nelson’s body be stored in alcohol. This wasn’t actually all that novel. The preservative qualities of alcohol were widely known at the time. But navy rum was considered the safest, most effective bet. Beatty’s decision to entrust one of Britain’s best-loved figures to a barrel of brandy mixed with camphor and myrrh showed bravery and conviction of character becoming of his esteemed, deceased patient.

And so, as the HMS Victory started its long, slow craw back towards Britain, Admiral Horatio Nelson was dunked in a barrel of brandy. Fortunately, the great man was small of stature (5″6 or 1.68 meters) so his crew didn’t have too much trouble stuffing him in. Things weren’t all plain sailing though. Over the course of the voyage gases emitting from Nelson’s corpse caused a build-up of pressure within the vat. Eventually, it caused the lid of the barrel to pop off; scaring the living daylights out of a sailor sitting nearby who thought his late admiral had risen—one assumes in a state of complete inebriation—from the dead.

Once the fleet reached Gibraltar, Beatty was forced to transfer Nelson’s pickled remains into a lead-lined coffin and replace the alcoholic mixture. Rumors began circulating that the men aboard the HMS Victory had discreetly drunk the entire barrel of brandy in which their late admiral was pickling. Hardcore (or indeed horrendous) as this would have been however, thankfully for the prestige of the British navy it turns out this was all they were: rumours.

While the Victory limped on, other ships were sent ahead to Britain to relay news of Nelson’s victory. The first to arrive was the aptly named HMS Pickle (its name had actually been changed from the HMS Sting four years prior to Trafalgar). After in Falmouth, Cornwall, on November 4, 1805, its captain Vice Admiral Cuthbert Collingwood made his way to London to deliver the message. Despite Britain’s great victory, the news of Nelson’s death was painfully received.

In floods of tears, the reigning monarch George III was reported to have said, “We have lost more than we have gained.” The Times newspaper printed daily publications on the late, great admiral, and the HMS Victory‘s homeward bound progress. Poems, written both in British and Latin, flooded magazines and newspapers to such an extent that editors had to implore their readership not to send anymore. Nobody had any details about precisely what had befallen Nelson mind you… but this didn’t stop people from speculating.

When the HMS Victory finally docked in Britain, it was to a panoply of national interest. Amongst the chaos caused by visitors to the ship, Nelson’s body was transferred again into another lead-lined casket (it’s a small miracle that his skin didn’t fall off during the move) during which Beatty performed an autopsy, recovering the prized musket ball. After one fourth and final move to a wooden casket, the by this stage thoroughly pickled Nelson was prepared to lie in state. And on January 9, 1806, St. Paul’s Cathedral in London held his spectacular funeral, which, in today’s terms, came to the cost of around $1.2 million.

Immediately, Nelson’s posthumous story began to seep its way into British drinking culture. Navy rum became known as “Nelson’s blood” while drinking cask liquor through a straw was commonly referred to as “tapping the admiral”. And the legacy that still survives today: Shepherd’s Brewery produce a pretty decent ale called “Tapping the Admiral” and many pubs up and down the country are called “The Lord Nelson” or some other such variation. All this just goes to show that—like the brandy he was stored in—Nelson’s reputation is something that has only become more refined with age.