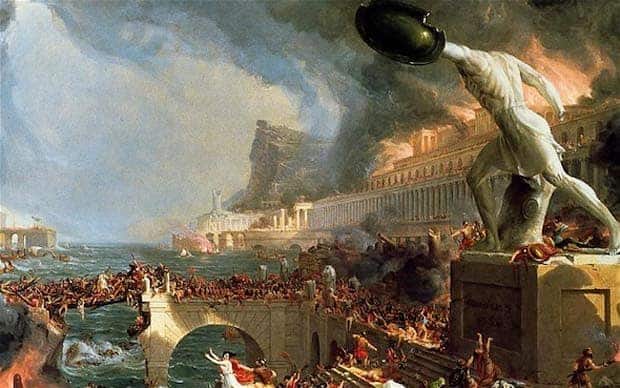 As is the case with all great empires, Rome was founded on a strong economic foundation. By its peak in 117 AD, the empire spanned approximately 1.5 million square kilometers and was inhabited by around 130 million people. Trade was crucial to the growth of the Roman economy and its outstanding transport system allowed a huge variety of goods to be imported across its borders. However, governing the empire was an expensive task with enormous military, administrative and logistical costs. A combination of several factors resulted in hyperinflation, heavy taxes, localization of trade and ultimately, a crippling financial crisis.

The denarius was the main coin used in the first 200+ years of the empire. When it was created, each coin contained 4.5 grams of pure silver and was the equivalent of a day’s wages for the average craftsman/skilled laborer. Once the amount of precious metals entering the empire fell, fewer denarii could be created. This lack of money didn’t prevent greedy emperors from building ridiculous vanity projects, and they decided to reduce the purity of the coinage.

Nero was one of the first emperors to devalue the denarius, and by the time Gallienus took the throne in 253 AD, the coins contained approximately 5% silver and consisted of a bronze core with a thin layer of silver. By 265 AD, the denarius contained 0.5% silver; the result was inflation of up to 1,000% across the empire. By this time, Rome had no more enemies to steal from so taxation was raised. The resulting mess completely paralyzed trade. By the end of the 3rd Century AD, the vast majority of trade was localized with barter methods used instead of the exchange of currency.

To make matters worse, the empire faced an intense labor deficit. For centuries, the empire relied on slaves to work as craftsmen and till the fields. In the latter part of the Republic and the first 150 or so years of the Empire, constant conquest meant there was a steady supply of slaves. By the 2nd Century AD, Roman expansion had practically ground to a halt, so the supply of slaves dried up along with the accompanying plunder. Later on, there was a growing humanitarian sentiment within the empire (when Christianity became the main religion) as Romans began to realize that slavery was wrong. A significant proportion of slaves were freed; this exacerbated the labor problem.

When Diocletian became emperor in 284 AD, he realized that it was no longer possible for one man to rule the vast empire. He made Maximian his co-emperor sometime in 285 AD with Empire split into east and west; Nicomedia was the original capital although it was changed to Constantinople in 330 AD. From this point onwards, the Senate would be ignored. In the past, it had advised the emperor on matters of state. The power of the empire was supposed to be based on an active military which became a problem when the empire’s military strength waned.

Some of the later emperors never even set foot in Rome and while the division offered an initial boost in strength, it ultimately made the Western Empire more vulnerable to attack. Rome had been having issues with Germanic tribes for centuries but was usually able to repel them or buy them off with land, an invitation to join the army or citizenship. The split became permanent in 330 AD.

Both halves of the empire prospered equally until the defeat of Eastern Emperor Valens at Adrianople in 378 AD. East and West effectively broke apart due to internal and external problems during the reign of Theodosius I. During his spell as emperor (379-395 AD), the empire’s resources and boundaries became overstretched, and he spent much of his time spreading Christianity and stamping out pagan practices. The Gothic War was mainly fought by Eastern Empire forces, but it weakened the Empire in the West.

Theodosius was the last person to rule over a unified empire. Upon his death, the Western and Eastern parts were governed by separate emperors. During the 5th Century AD, certain rulers actually moved the seat of the Western Empire away from Rome with Ravenna and Milan serving as capital at different stages. The split worked well for the East which lasted another 1,000 years but the West completely crumbled.

At its peak, the Empire stretched from the Atlantic Ocean to the Euphrates River, but its sheer size proved to be a burden. Although the Romans created an excellent transport network, they still found it tough to communicate. Naturally, Rome created a vast array of enemies when expanding its empire, so it was constantly under attack from different tribal peoples eager to seek revenge.

Recruiting sufficient troops and sending them to different parts of the empire to quell uprisings started to take its toll. In the 2nd Century AD, Emperor Hadrian built his famous wall in Britain as a means of keeping the enemy at arm’s length. The sheer cost of constant recruitment and military upkeep meant Rome ultimately stopped leading the field in technological advancements.

Gaius Marius’ changes towards the end of the 2nd Century BC significantly contributed to the growth of the Roman army. It became one of the most awesome and well-organized fighting units in the world and was both feared and respected by its enemies. Over time, however, the entire makeup of the army changed dramatically. One method of getting Romans to enlist in the military was by offering a competitive salary. Ultimately, the empire started to struggle to maintain a good rate of pay, so fewer Romans were willing to join.

Emperors such as Diocletian and Constantine felt it necessary to hire foreign mercenaries to swell the ranks of the imperial army. These ‘barbarians’ could be recruited for lower pay and the promise of Roman citizenship for service. It got to the point where Romans in the army used the word ‘barbarus’ instead of ‘soldier.’ Eventually, the army was filled with Germanic Goths and other barbarians.

While these new recruits were exceptional warriors, they had zero loyalty to the empire. In fact, they increasingly began to turn against their Roman counterparts. The infiltration of mercenaries led to disorganization as the army no longer functioned like the well-oiled machine of lore. The Barbarians gained sufficient knowledge of Roman military tactics to use this information against their enemies. A significant number of the Barbarians that sacked Rome once fought in the Roman army.

As I mentioned earlier, the split in the empire made the western part more vulnerable to attacks; a particular point of weakness was the northern Danube-Rhine border. During the 4th Century AD, a significant number of Goths began to settle near the border. Initially, at least, they only wanted to become part of the empire and had no interest in attacking Rome. Their primary concern was getting away from the marauding Huns who were laying waste to northern Europe.

Eventually, the Romans allowed Visigoth tribe members to cross into Roman territory, but its governors treated the new arrivals like animals. According to one ancient source, the Romans forced the Goths to put their children into slavery in exchange for dog meat. The irate Goths quickly became fed up with this vile treatment and rose up against their enemy. The Eastern Emperor Valens was defeated at the Battle of Adrianople in 378 AD in an event historians claim was the beginning of the end for the Western Empire.

The Romans negotiated a rushed peace treaty, but it was far too late to save their empire. The Goths were promised land in the Balkans, and when it wasn’t forthcoming, they rose up against Rome yet again. The Goths were led by a man called Alaric who once served in the Roman army as a commander. When the Western emperor delayed his response to the initial demands of the Goths, Alaric asked for more. He wanted recognition as citizens of Rome and extra grain for his people. When this was rejected, Alaric took his well-organized army across the Alps and attacked Rome in 410 AD.

The incompetent Honorius was emperor at this time and lived in a villa in Ravenna. When Alaric arrived outside the city, he bided his time until Roman supplies ran low. Then he launched his attack and sacked the city over a three-day period. Alaric left the city with 13 tons of silver and two tons of gold.

Although he died soon afterward, Rome was just waiting to be sacked once again. More Germanic tribes such as the Saxons and Vandals were able to quickly take Roman territories such as Spain, North Africa, and Britain. Attila the Hun was one of many barbarians to damage the empire, and he invaded Italy in the 450s AD. By 475 AD, only Italy remained as part of the Western Roman Empire. The sad decline was neatly summed up by the events of the final day of the empire. A barbarian named Odovacar was able to walk into Rome unopposed in 476 AD, and he dethroned Romulus Augustus. He contacted Zeno, the emperor of the East, and explained that he would not accept the title of ‘emperor.’ To make things clear, Odovacar even brought the traditional clothing of Roman Emperors with him to Constantinople.

History Collection – Did Poisoning Really Bringing Down the Roman Empire?