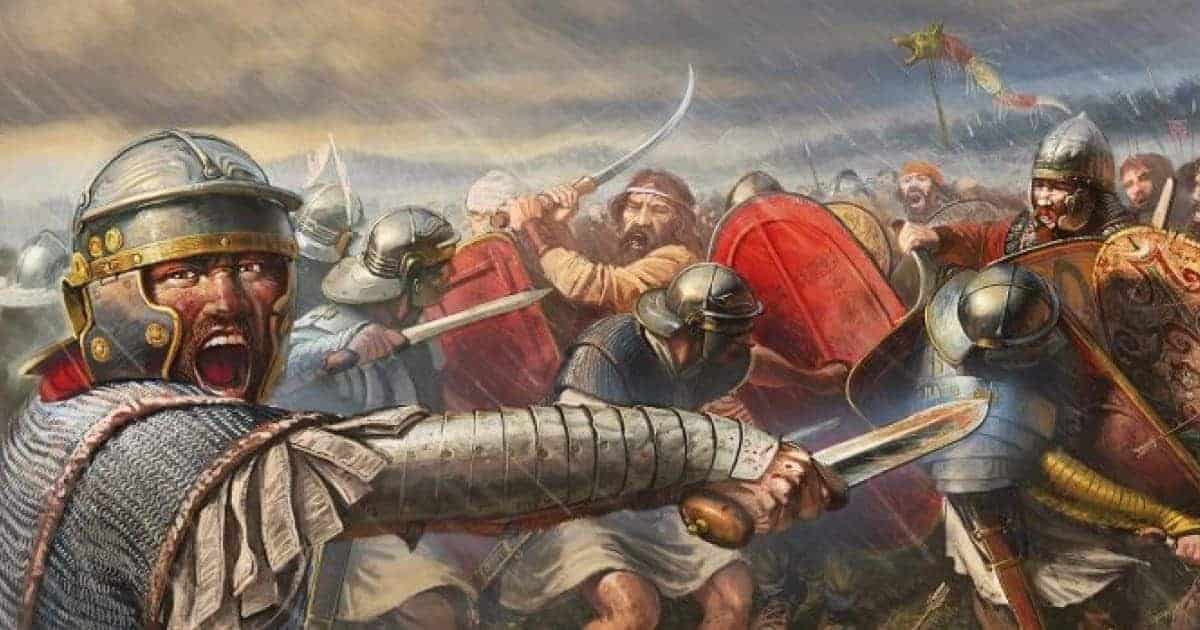 The Roman army was one of the longest surviving and effective fighting forces of all time. It survived centuries of combat as it first expanded the Roman Empire and then defended it from rampaging barbarian hordes. Its survival depended on constant innovation as its soldiers faced death for the glory of Rome.

For many soldiers, years were spent marching with the army, and most of their work involved digging trenches and waiting for the fighting to begin. Although it seems as if the Romans were constantly at war, only a small percentage of any soldier’s career involved actual battlefield experience.

Technically speaking, the history of the Roman army spans 2,000 years from the early formation of armed forces in the 6th century BC to the Palaiologan Byzantine Army which was formed in 1261 and finally defeated in 1453. In this article, however, I will focus on the battlefield experience of the Imperial Roman Army which was formed by Augustus in 30 BC and lasted until 284 AD when it became classified as the Late Roman Army. First of all, I will briefly look at the history of the Roman army up until the Republic became an Empire.

Early History of the Roman Army

The first iteration of the Roman army was developed in the 6th century BC by King Servius Tullius. He created five classes of soldiers based on their individual wealth. The more money you had, the better equipment you could afford and the higher ranking you would attain. Fighting ability wasn’t relevant.

It developed into the army of the Mid-Republic by the 4th century BC. It was also known as the Manipular Army, and according to Livy, it consisted of two legions in 362 BC and four legions in 311 BC. It was still a citizen army at that stage, and while it suffered some horrendous defeats, it was able to defeat Hannibal in the Second Punic War. During the 2nd century BC, Rome’s territory had expanded following victories at Cynoscephalae in 197 BC and Pydna in 168 BC. As a result, Rome was forced to develop permanent bases overseas, and this led to a shortage of manpower.

The final phase of the Roman Army of the Republic was marked by an enormous overhaul which began towards the end of the 2nd century BC. Gaius Marius often receives credit for the innovations, and while he was heavily involved, he probably finalized the changes rather than implementing them in the first place.

Volunteers were enlisted from Roman citizens without property, and they received armor and weapons paid for by the state. In a stroke, the Roman army’s might was significantly increased. The reform also ensured that Rome had a large standing army, and military men who completed a certain term of service received a ‘pension’ in the form of land grants and cash. By now, the army was better disciplined, followed more detailed tactics and was overall, more formidable than ever.

As Rome moved from Republic to Empire after Augustus all but became Emperor after the Battle of Actium in 31 BC, its army became larger and more powerful. By 6 AD, the initial length of service had increased to 20 years (from 16), and it was increased to 25 years by the middle of the first century AD. Rome was in a very pronounced spell of expansion by now, and since soldiers were usually fighting hundreds or even thousands of miles from home, they usually served for far longer than their minimum requirement. It wasn’t unusual for long-term soldiers to mutiny.

Why Join the Army?

The Marian reforms led to a dramatic increase in the army’s size. Recruits knew that the job involved lots of traveling with a high risk of death, so why join? Bear in mind that a large proportion of recruits would have been 18-20 years of age by the 1st century BC. It took a long time to complete your service and while the pay was reasonable, it wasn’t an enormous amount plus deductions were made for food and clothing.

Add in the harsh conditions one would face and the strict disciplinary procedures, and you have to question the motives of those who joined. In reality, however, it was a no-brainer for those who came from poor backgrounds. The army provided a steady source of income, food, and doctors. Then there was the small matter of ‘supplementing’ their income with plunder plus the chance of honor and glory.

Although the initial pay wasn’t terrific, it got significantly better as you climbed the military ladder. For example, a centurion (leader of a unit of approximately 80 men) received on average, 18 times more than the average soldier at 13,000 denarii by the 1st century AD. A first cohort centurion received 27,000 denarii while a primi ordines (senior centurion) received 54,000 denarii.

Outside of battle, soldiers would participate in route marches up to three times a month and they would also practice maneuvers in the field. Soldiers also had to help build roads and bridges, man hospitals, bake bread and fetch fuel. Every aspect of a Roman soldier’s training was geared towards one thing, however; battle.

Romans on the Battlefield

The Romans were involved in innumerable open field battles with their enemies over the centuries and by the time the imperial army had been formed, they had battlefield fighting down to a fine art. As a common soldier, you would be part of a cohort, a unit of approximately 500 men which consisted of six centuriae. Your centurion would issue a command and, along with the rest of your centuriae, you would form into four ranks and face your enemy across the battlefield.

In most cases, you would be better equipped than the enemy. As a Roman soldier, you wore specific armor and a helmet and were armed with a throwing spear called a pilum and a short sword for stabbing called a gladius which was strapped to your waist. Along with the rest of your brothers, you would wait for the command to attack and when it arrived, the entire cohort would march forward as one.

A key aspect of the Roman attack plan was to keep the formation as tight as possible although there were gaps between cohorts to allow men to move if necessary. When you are one of thousands of men, it is difficult to determine where you were going. Each centuriae of the Roman Imperial army had a standard bearer to help keep the men in place. At one point, you may have taken a step out of place but never fear, the centurion’s second-in-command, the optio, would keep a close eye on proceedings and shout at you to get back in line.

Messengers on horseback rode across the Roman battle lines to provide officers with updates on the enemy’s movement. On this day, you faced enemies with archers. There is nothing you could do except stay in formation, raise your shields and keep their deadly arrows at bay. If one of your brothers got hit with an arrow, he fell back, and another man took his place to keep the shield tight.

In between the volleys of arrows, your cohort marched onward and soon; the enemy was only 20-30 yard away; now is the time for hand-to-hand combat and fortunately, your training has covered this brutal eventuality all too well. Your first fighting act was to launch your pilum at the same time as your fellow soldiers. While the enemy was trying to defend against the flying javelins, you were ordered to charge.

When fighting at close quarters, you used your knife to cut down an enemy. Your goal was to kill an enemy, step into the gap and force a break in their formation. If the first sortie didn’t work, you were ordered to charge again and again until the enemy finally broke and ran. Once chaos reigned through the enemy ranks, you knew it is time to finish them off, and this is where most of the killing occurred as you butchered fleeing barbarians. Obviously, the above is only one description of what might have happened on a battlefield.

All too often, the enemies of Rome would be defeated, and Roman soldiers would enjoy the spoils of victory. Other times, however, the soldiers would lie dead on the battlefield. The so-called Principate period of the Imperial Roman army was probably its peak. As its borders were threatened by barbarians, and the hunger and skill associated with Romans in the past dwindled, the great army enjoyed fewer and fewer victories until it all ended in the West in 476 AD.