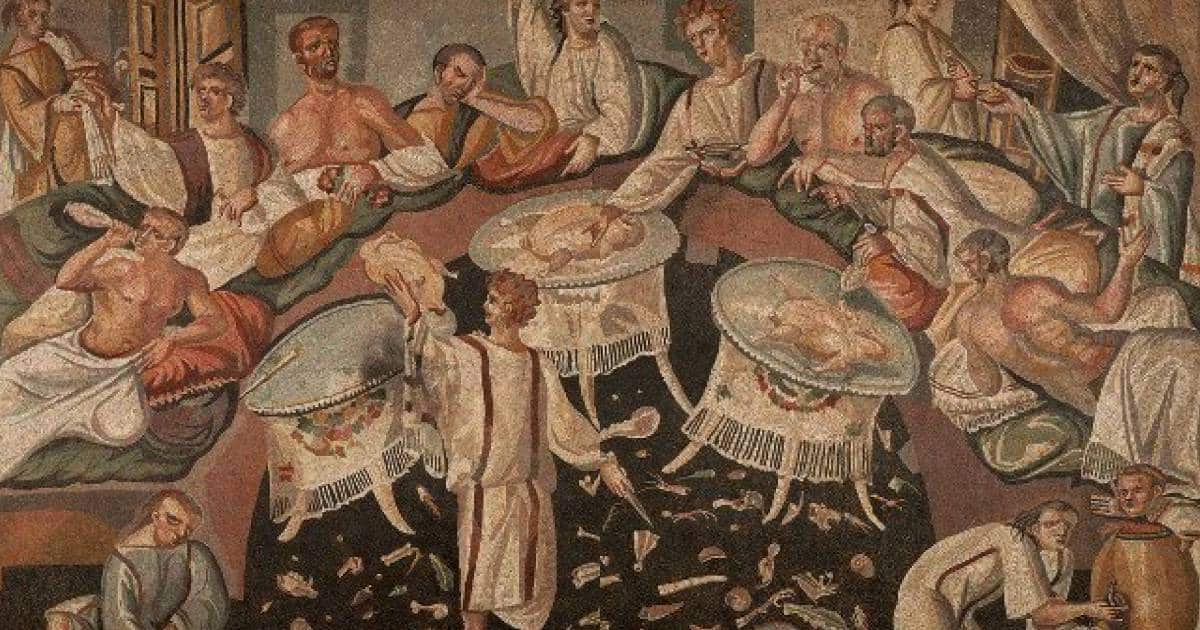 In 1983, Canadian Research scientist Jerome Nriagu theorized that lead poisoning led to the decline and fall of the Roman Empire. Nriagu argued that the incidental ingestion of the toxic metal, via water pipes and from food cooked in lead-lined pots caused the mental and physical decline of the Roman people over multiple generations. The consequent erosion of the mental faculties of the ruling class led to the empires’ mismanagement and its subsequent fall.

It is now generally accepted that Nriagu overplayed the leads’ role in the decline and fall of the Roman empire. While the use of the metal may have increased in the imperial period, how much this affected the population as a whole is difficult to quantify. The Romans knew of the dangers of lead and took limited measures to protect themselves. There is also no direct evidence in the ancient or archaeological record to suggest widespread lead poisoning.

However, in 2017 a team from the University of Southern Denmark reported in the journal, Toxicology Letters, that they had identified another potential suspect for widespread Roman health problems: antimony. The letter has sparked speculation that poisoning- albeit from a source other than lead- did indeed erode the brilliance of Rome and bring about its doom. The question is, is the case against antimony any stronger than lead?

Lead and the Fall of the Roman Empire

Jerome Nriagu first published his argument for lead poisoning in the New England Journal of Medicine. In his article, “Saturnine Gout among the Roman Aristocrats- Did lead poisoning contribute to the Fall of the Empire?” Nriagu argued that the decadent lifestyle of the Roman elite between the years 30BC- 220AD particularly exposed them to lead, leading to severe poisoning that destroyed their physical health, cognitive ability, fertility and manifested itself as a form of gout.

Nriagu based his argument on the diets of 30 Roman rulers. His paper identified 19 who he believed “had a predilection to the lead-tainted food and wine.” One of those victims of lead poisoning was Emperor Claudius. Nriagu described Claudius as “dull-witted and absent-minded, ” because of the over-ingestion of lead. This poisoning, Nriagu argued also accounted for the Emperors’ well-documented bodily tremors and weakness, as well as his unpredictable temper.

What was it about the lifestyle of the Roman aristocracy that made them so susceptible to lead? Nriagu believed it was because so much of their food and drink was prepared and served in lead-lined vessels. A particular offender was the grape syrup, must, which was used to sweeten wines and food- and was produced by slow simmering in lead-lined containers. Using Cato and Columella’ recipes for must, Nriagu simulated its production and concluded that each liter had concentrations of between 240-1000milligrams of lead. One 5ml teaspoon of must would have been enough to cause chronic lead poisoning. Nriagu claimed Roman aristocrats drank at least two liters of sweetened wine a day, which meant their lead levels would be catastrophic.

However, Nriagu ignored various other factors. Firstly, the Romans often drank wine watered- and did not routinely sweeten it. The Classist and pharmacist John Scarborough also attacked Nriagus’ lack of classical knowledge. In “The Myth of Lead Poisoning Among the Romans: An essay review,” Scarborough stated that the Romans were aware of the dangers of lead poisoning and tried to protect themselves from it. Ancient sources agree with this. “Water conducted through earthen pipes is more wholesome than that through lead; indeed that conveyed in lead must be injurious, because from it white lead is obtained, and this is said to be injurious to the human system. ” Vitruvius noted in his ‘On Architecture.”

The architect went on to note that the symptoms of poisoning in lead workers: their pallor and growing physical weakness. The Romans recognized that these symptoms were because of the lead, “destroy[ing] the vigor of the blood.” Lead was often extracted from silver, and the perils of this association was also noted, which explains why Vitruvius claims silver dinnerware was for display only: “those whose tables are furnished with silver vessels, nevertheless use those made of earth, from the purity of the flavor being preserved in them” (VIII.6.10-11). Often, Roman cooking pots were not lead-lined but copper- probably for the same reason.

Dangers in the Water System

People may have been able to avoid lead in the home. But everyone had to drink water. The Romans used lead in their water system, its malleability making it perfect to shape pipes and line aqueducts (Vitruvius II.6.1). So was lead poisoning occurring through the water system- thereby affecting more people than the aristocracy? The only way to ascertain this was to investigate the Roman water system- most specifically the pipes that transported water around the city of Rome.

In 2014, a team from the University of Utah published their findings from one such investigation in a paper entitled “Lead in Ancient Rome’s city Waters.” The team measured lead isotopes in the sediment of the River Tiber and Trajanic Harbor, where the outflow from Romes’ water system drained. They found that the piped water probably contained 100 times as much lead as local spring water. However, despite the evidence of the deposit, it seems that people consuming the water were not that exposed to lead poisoning.

Frontinus in his treatise on the aqueducts of Rome complained how “the accumulation of deposit, which sometimes hardens into a crust, contracts the channel of the water” (CXXII.1). Modern examinations of Roman lead water pipes showed they were encrusted with a layer of calcium carbonate- which would have insulated the water against the lead. Over time, the concentrations of lead in the basin may have built up due to deposition- but, as Hugo Delile, a member of the Utah team admitted, the amount of lead people ingested with their water was “unlikely to have been truly harmful.” “Lead is no longer seen as the prime culprit of Rome’s demise” Delile admitted.

However, something else in the pipes could have been. In 2017, a team from the University of Southern Denmark was given a piece of Roman pipe to investigate from a private collection. Kaare Lund Rasmussen and his team analyzed a 40mg section taken from the House of Caecilius Jucundus in Pompeii in 1875. The Danish team discovered that the concentration of antimony in the pipe was 3680ug/g corresponding to 0.368wt% of the pipe’s weight. A ground control sample showed levels of 5.63ug/g- meaning the levels of antimony in just that short section of pipe were staggering.

“Their drinking water must have been hazardous,” Rasmussen, a member of the team and specialist in archaeological chemistry, said of the people of Pompeii. “This is the first time that you see that it is possible they died of antimony poisoning instead of lead poisoning.”

Antimony is an element often used as an alloy with tin and lead. So it would have formed part of Roman water pipes. Because of its composition, the metal could have leached into the water supply with greater ease than lead-calcium carbonate furring notwithstanding. Furthermore, if taken in the right form and the correct quantity, antimony is much more hazardous to health, its effects being much more immediate and toxic.

Victims would probably initially noticed themselves afflicted with vomiting and diarrhea. These symptoms may have seemed like a mild stomach upset. But antimony poisoning also made its victims thirsty. So they would have drunk more water. As a result, the symptoms would have increased, until in worst cases scenario, the vomiting and diarrhea became so severe that the victim suffered dehydration. Ultimately, antimony poisoning can lead to liver and kidney failure and cardiac arrest.

The Danish team published their findings in a brief report in the journal, Toxicology Letters. However, the press blew these brief results out of proportion -through no fault of Rasmussen and his research team, who were utterly candid about the fact more research was needed. “It’s only one sample,” Rasmussen emphasized. “We know we should measure more.”

Rasmussen also stresses the localized nature of the findings. In the first few paragraphs of the report, he states: “We show that health concerns in Pompeii were most likely the result of antimony (Sb) intoxication.” Pompeii. Not the whole of the empire. Rasmussen also notes that Pompeiis’ waters were particularly susceptible to contamination by high levels of antimony because they were near a volcano. This fact makes antimony poisoning more likely in Pompeii as the element naturally occurs in the groundwater. However, it was not necessarily the case elsewhere in the empire.

Then there is still the question of how much antimony people would have ingested from the water supply. The team built a loop system of lead pipes soldered with antimony to test its effect on water. For four weeks, the team pumped water around the pipes. At the end of the test period, it revealed a high level of antimony toxicity. However, in Pompeii, the same water did not continually flow around a system of pipes. Instead, it ran downhill from water cisterns on the higher level of the town straight to the point of use. It would not have passed in the same direction twice-limiting its contact with any antimony in the system.

More sampling, over a more extensive area coupled with skeletal analysis, is needed before antimony can take the blame for the fall of an empire.

Arstechnical – Did Lead Poisoning Cause Downfall of Roman Empire?

Cultura Colectiva – From Caligula to Nero: There Might Be a Scientific Explanation for Their Eccentricities

Alcohol Problem & Solution – Alcohol among the Greeks and Romans: They Enjoyed Drinking

JSTOR – The Myth of Lead Poisoning Among the Romans: An Essay Review

Medical Daily – A Brief History of Lead Poisoning: From Ancient Rome to Michigan

Science Nordic – Pompeii Residents Were Screwed Before the Volcanic Eruption