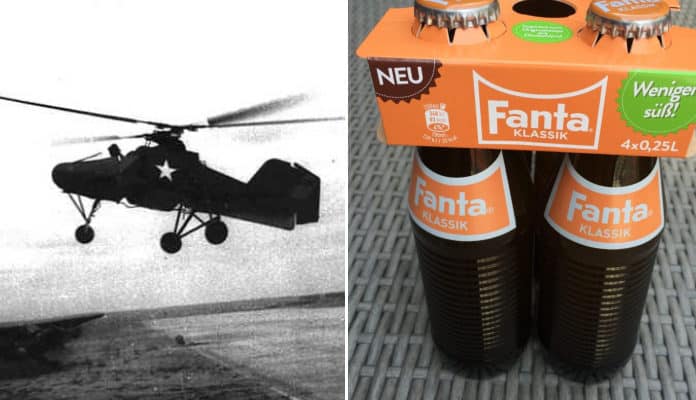 Whilst we are all aware, to a lesser or greater extent, of the scientific and engineering feats of the Allies during the Second World War, most notably the nuclear children of the Manhattan Project but also radar and the computing geniuses of Bletchley Park, many of the accomplishments of Nazi Germany remain forgotten or disassociated.

Despite the undeniable desire to erase the Third Reich from our collective memory, these inventions had, and continue to have, a profound impact on modern society and include some of the most-used military and civilian items of today. Here are 20 incredible inventions made by the Nazis that warrant recognition:

20. The Nazi Kolibri was the world’s first mass-produced helicopter

The Flettner Fl 282 Kolibri (“Hummingbird”) was the world’s first mass-produced helicopter, designed by the Nazis in the early 1940s.  A single-seat rotor-propelled helicopter, utilizing an intermeshing blade configuration not replicated until after the Second World War, and only requiring servicing every 400 hours as opposed to the industry standard of 25 at the time, the synchropter was initially considered by the German Kriegsmarine as highly advantageous for the aerial identification of enemy submarines; ordering 15 prototypes, and in 1944 a further 1,000 completed models, just 24 Kolibri would see active deployment due to sustained Allied bombing of production plants.

Flight testing of the Kolibri occurred throughout 1941, including take-offs from naval cruisers, before being deployed from 1942 onwards. Primarily employed for reconnaissance and inter-ship transportations, as the prolonged conflict induced a shortage in aircraft the Luftwaffe begun converting the Kolibri for battlefield use; this change saw an additional seat for an observer attached to the rear of the helicopter, and an observation unit for artillery spotting was established in 1945. However, as light aircraft the Kolibri was patently unsuited to this role and were consequently rapidly destroyed by Soviet anti-aircraft fire, with just three surviving the conflict.