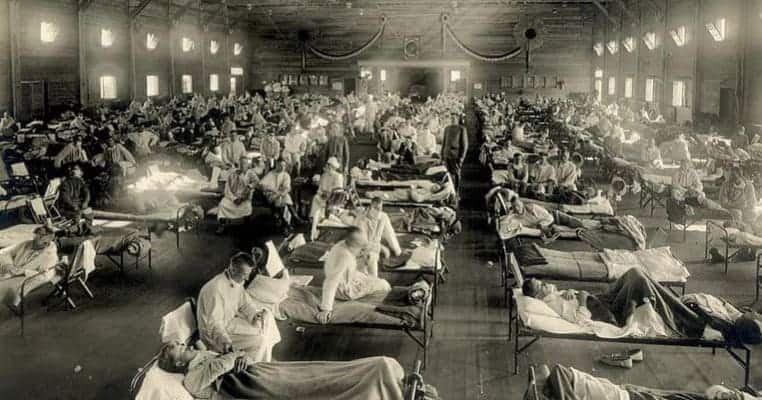 19 Sickening Events During the Spanish Flu of 1918

17. The Spanish Flu pandemic was truly global in its scope

Of the areas of the world which were populated at the time of the pandemic only one – an island in the delta of the Amazon River near Brazil known as Marajo – did not report an outbreak of the Spanish Flu. Even the remote South Atlantic island of St. Helena, where Napoleon had spent his last years of exile a century earlier, was stricken by the Spanish Flu, though no deaths were reported there. The French colony of New Caledonia, similarly to American Samoa, imposed a blockade of its shores and prevented any deaths to the flu. Other areas seemed to be particularly vulnerable despite efforts to prevent the spread of the flu. Casualties around the world were staggering.

In the United States alone up to 675,000 fatalities were attributed to Spanish Flu and the secondary infections it caused, more than died in the four years of the American Civil War a half-century earlier. Native American tribes suffered a disproportionate number of deaths, and in Alaska entire communities of Inuit natives were wiped out. Great Britain suffered 228,000 dead. Brazil lost its President, Francisco de Paula Rodrigues Alves, and over 300,000 of its citizens. Iran lost almost 22% of its total population during the pandemic. Even the tropical paradise of Tahiti was stricken, so severely that it was estimated to have lost up to a quarter of its population when the pandemic struck there, as with so many locations, brought to the isolated island by a visiting ship.

18 The legacy of the Spanish Flu pandemic

By the end of the year 1920, the Spanish Flu pandemic appeared to have finally faded away. Memory of the global disaster faded with it. During its height, media coverage was limited and what was present was for the most part localized, rather than covering the disease as it spread around the globe. With the end of the World War, once the flu had passed through one’s community, citizens wanted to get on with their normal lives. In the United States, the issue of Prohibition and the decade which became known as the Roaring Twenties moved to the fore. The flu which had ravaged the country became just another of the epidemics which were at the time a part of life. The world merely shrugged it off and moved forward.

Because of its coinciding with the Great War, as it was known at the time (it wouldn’t become known as World War I until the name World War II was coined), the overall impact on the public psyche in most countries was limited. With the majority of its fatalities among healthy young men, as with the war, it came to be considered a part of the war, a view especially prevalent in Europe. Its impact in Asia and the Pacific was relatively unknown to the great majority of people who were not in some manner connected to those regions. The same can be said about its impact in Africa. Not until the late 20th century, when public awareness of bird flu and other forms of influenza virus increased, was the Spanish Flu Pandemic brought to the public consciousness.

19. Where did Spanish Flu come from?

In the 21st century efforts to understand how the virus developed, what caused it to mutate into the deadlier virus of the second wave, and how it spread, continue to produce often conflicting theories. The fact is though efforts to understand what the virus was continuing, a definitive answer remains elusive. The pandemic which killed so many people that it was compared to the Black Death of the Middle Ages – and may well have killed a greater percentage of the population of Europe than its predecessor – remains a mystery, even as its history becomes more widely known.

“Origins of the Spanish Influenza Pandemic (1918-1920) and its relation to the First World War”. Anton Erkoreka, Journal of Molecular and Genetic Medicine. November 30, 2009. Online

“Flu: The Story of the Great Influenza Pandemic of 1918 and the Search for the Virus That Caused It”. Gina Kolata. 2001

“The Great Influenza: The Epic Story of the Greatest Plague in History”. John M. Barry. 2005

“Out in the Cold and Back: New-Found Interest in the Great Flu”. Guy Beiner, Cultural and Social History, Volume 3. 2006