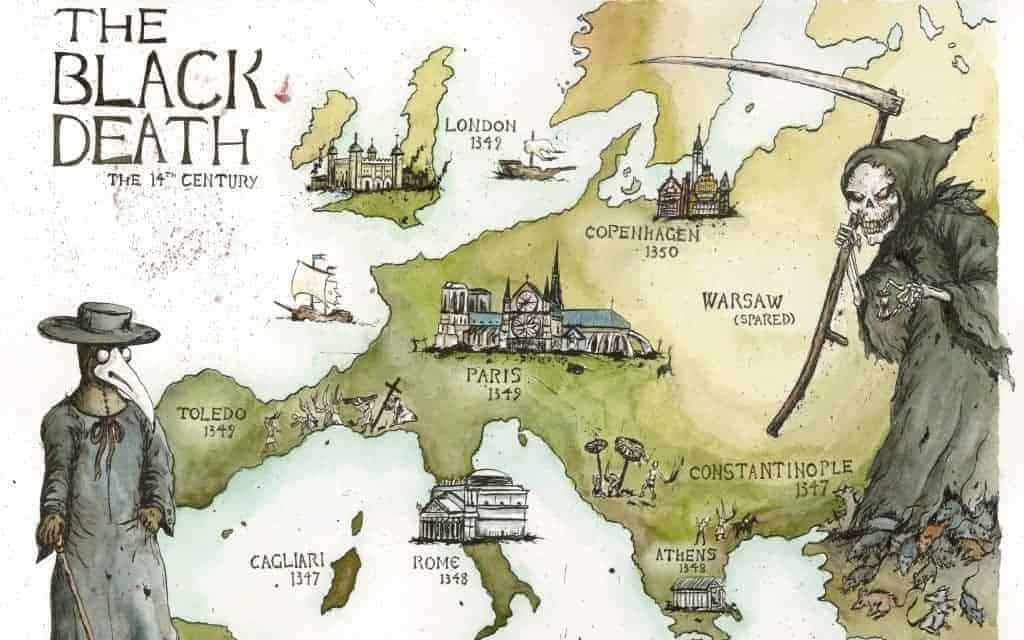 Sometime in October 1347, a Genoese trading ship docked at the bustling port of Messina in Sicily, and the sailors and dock workers started to do the same things they had done so many times before. But this ship was different; it carried the plague. Of course, neither the sailors nor dock workers realized the ship was carrying such a deadly cargo. Onboard the ship was the usual colony of rats; these rats carried fleas, and the fleas carried the Yersinia pestis bacterium. The fleas jumped from rats to humans, blood was mixed, bacteria was shared, and the plague took hold. None of this was known until the twentieth century. Contemporaries believed the plague was sent from God.

Matteo Villani, a Florentine chronicler, wrote a detailed account of the suffering, “It was a plague that touched people of every condition, age and sex. They began to spit blood and then they died…some immediately, some in two or three days, and some in a longer time…most had swellings in the groin, and many had them in the left or right armpits and in other places, one could almost always find an unusual swelling somewhere in the victim’s body.”

The plague was painful and afflicted all members of society. By the time it subsided, it is estimated that 30% to 60% of Europe’s total population had suffered a horrible, agonizing, and excruciating death. But how bad was it? Well, very bad for those infected, but what about the people left behind?

The feudal system which was prominent in Europe during the Middle Ages controlled all sections of society. On the bottom rung of the social ladder were the peasants who were obligated to work in the fields of the landowners, harvesting the crops in return for protection. The death toll of the plague led to fields being abandoned and unharvested, the lack of a labor force compelled the remaining laborers to demand higher wages, these wages would be paid in cash. The terms and conditions of their employment were also dictated by the workers. Guilds were forced to admit new members to replace the many workers who had died, which would add to the social mobility.

Matteo Villani explained the work environment in one of his many writings during the period, “Nurses and minor artisans working with their hands want three times or nearly the usual pay and laborers on the land all want oxen and seed, and want to work the best lands, and to abandon all others.” The labour shortage also impacted the lives of prostitutes who experienced an upturn in their working conditions. As Leah Lydia Oates suggests, prostitutes enjoyed a “seller’s market” due to an “all-round labour shortage,” leading to “a general improvement of their conditions.”

The shift towards a more individual system of work led to a greater amount of freedom for the lower classes, this freedom manifested itself in migration away from the farms to the towns and cities. The dark shadow of death was always close behind and this spurred people to embrace ambition by learning new crafts and trades. Cities once more became bustling, innovative centers of commerce, which were financed by an inpouring of cash.This led to new products being traded, and new revenue streams developed.

A burgeoning middle class began to develop. The social class not only purchased personal items but also became patrons of the arts, paving the way for the Renaissance. The perfume industry also received a boost, some doctors believed that dirty air caused the plague, and to protect against the foul stench people used aromatic herbs to purify the air.

The Black Death paid no attention to class boundaries nor religious affiliations, the richest and the holiest in society died a miserable death along with the sinners. The plague produced a number of questions the all-powerful Christian Church could not answer. Why were the clergy and monks dying with the poverty-stricken labourers?

If the plague was a test from God, why were God’s messengers failing the test? These spiritual questions were asked by the survivors and many people lost faith. Just as importantly ,the Christian Church lost credibility as an exclusive communicator with God.

People started to find their own path to God away from the organized Christian Church. One group known as the Flagellants roamed across Europe whipping themselves with a scourge to get closer to God. The physical suffering was meant to atone for their sins.

This questioning of the Christian dogma reached the English theologian John Wycliffe, who expressed dissent against the abuses of the Church. As so often happens in history, this increase in freethinking would lead to further changes, most notably 200 years later when the Reformation began.

The economic and religious changes would also lead to a change in society. With death lurking around every corner, individuals become more interested in the here and now, the life of the moment with its passions and its beauty became more appealing. An appreciation of the arts developed alongside a thirst for knowledge. People looked to the past for answers and rediscovered the works of the classical Greeks and Romans.

Rats which contained the fleas which carried the Yersinia pestis bacterium found Medieval dwellings prime real estate. Often people shared a room with livestock and other animals, cramped together in their own filth, the floors and roofs were covered in hay, such conditions were perfect for rats.

The decline in the population saw a movement towards an increase in demand for private spaces, as a reaction to the pre-plague crowding of cities. In upper-class society, private rooms had their own lavatories and the hay which covered the floor would be replaced by rugs and carpets.