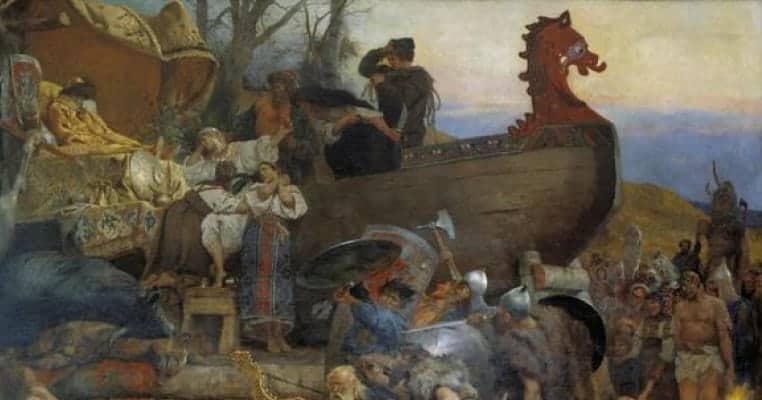 1. The Vikings possessed imaginative brutality, devising perhaps the most unpleasant method of execution in human history – the blood eagle

Given the immensely brutal conditions of existence within Viking culture, it is perhaps unsurprising that they are held responsible for the creation of the one of, if not the most vicious and painful mode of execution ever devised by humanity: the blood eagle. The blood eagle was a ritualistic and sacrificial method of execution, whereupon the victim was lain before his killer and who severed his ribs from his spine; through the opening created by this painful brutalization, the victims’ lungs were then pulled out and draped over their shoulders to create an illusion of wings. Accounts of the blood eagle appear just twice in surviving Norse accounts, although is alluded to in other sources, with both named victims of royal status and killed by a son in vengeance for the murder of their father, suggesting the reservation of the method of execution only for those of special significance and specific purpose.

The execution of the first victim, Halfdan Haaleg, also known as “Halfdan Long-leg”, is provided by the Orkneyinga saga, detailing the sacrifice of the son of Harald Fairhair to Odin at the hands of Torf-Einarr: “Einarr made them carve an eagle on his back with a sword, and cut the ribs all from the backbone, and draw the lungs there out, and gave him to Odin for the victory he had won. The second known victim, Ã†lla of Northumbria, described in the “Tale of Ragnar’s sons”, was executed by Ivar the Boneless in 867 CE in retribution for the murder of his father, the legendary Viking ruler Ragnar LoÃ°brÃ³k. Captured after a battle at York, the saga recounts that “they caused the bloody eagle to be carved on the back of Ã†lla, and they cut away all of the ribs from the spine, and then they ripped out his lungs.”

Medievalists – The Vikings, Their Worms, And The Diseases They Got

“Some Characteristics of the Icelandic â€˜Holmganga'”, Gwyn Jones, Journal of English and Germanic Philology (1933)

“The Sagas of the Icelanders”, Jane Smiley, Penguin Classics (2001)

“Northern Antiquities: or An Historical Account of the Manners, Customs, and Laws, Maritime Expeditions and Discoveries, Languages and Literature, of the Ancient Scandinavians”, Percy Thomas, George Woodfall & Son (1847)

“The Berserker: His Origin and Development in Old Norse Literature”, Benjamin Blaney, University of Colorado (1972)

“Icelanders in the Viking Age: The People of the Sagas”, William Short, McFarland and Company (2010)