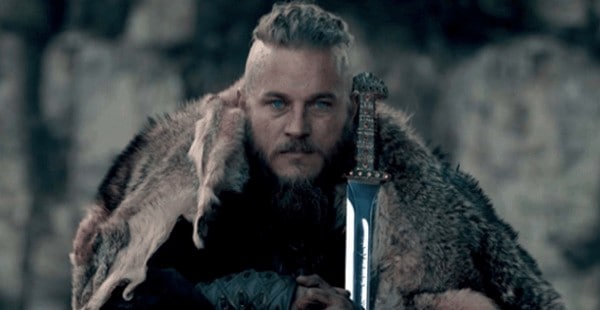 The name Ragnor Lothbrok has been made famous in recent years by The History Channel series Vikings. The series sets Lothbrok up as the founder of a dynasty responsible for the expansion of Viking exploration – and the subsequent plunder and conquest for which the Vikings became so famous. Lothbrok is shown discovering new lands and plundering Paris. Chroniclers portrayed his death as the catalyst for the conquest of much of Saxon England as his sons Ivar, Ubbe, and Bjorn launch the invasion of the Great Heathen army upon the North of England as an act of vengeance.

The Vikings did indeed besiege Paris in 845 AD. Likewise, in 865 AD, what became known as the Great Heathen Army did invade the North of England and sweep down to the southern reaches of Anglo Saxon England. Ubbe, Ivar, and Bjorn are likewise verifiable as real historical characters. However, the figure of Ragnor Lothbrok is more shadowy. For the earliest documented tales of Ragnor Lothbrok are in European literature that was set down centuries after his death. So is Ragnar Lothbrok just a convenient legend used to give a context to the events of the Viking age? Or was he based on a real man?

The Legend Of Ragnar Lothbrok

The legend of Ragnar Lothbrok, sprang up wherever the Vikings settled. An Old Icelandic saga, the Ragnars saga Loobrokar, written in Old Norse sometime in the thirteenth century, provides the complete version of the story. However, legends of Ragnar and his sons also appear in a poem from the Orkney Isles, Háttalykill. Other earlier sources of Ragnar’s story are the Gesta Danorum written by the Danish historian, Saxo Grammaticus between 1188 and 1208. These various works, pieced together, allow us to reconstruct a rough narrative of Ragnar’s legendary ‘life.’

Ragnar was the son of the King of Denmark and later a king in his own right, famed for his heroic exploits- at home and abroad. The Gesta Danorum tells how he avenged the death of his grandfather, King Siward of Norway at the hands of the Swedish King, Fro. During this campaign, Ragnar met his future wife, Lagertha, “a woman with the courage of a man who fought fearlessly.” Ragnar was so impressed by Lagertha’s bravery that he decided to marry her. Lagertha however, was not so easy to convince, and Ragnar had to kill the bear and hound guarding her house to win her over.

Ragnar won another of his wives at the same time as he acquired the nickname. ‘Lothbrok”. This wife, Thora was the daughter of a powerful earl who had given her a little snake as a pet. However, the snake grew until it was a massive monster that terrorized the earl’s territory. Thora’s father offered his daughter to whoever could kill this lethal nuisance. Ragnar decided to try his luck. To protect himself from the snake’s venom, he donned a pair of woolly breeches coated in tar. Killing the snake and getting the girl, he earned himself a new name into the bargain: “Lothbrok” meaning “hairy breeches’.

Ragnar’s third wife outwitted him with her cleverness. Ragnar had sent his men to find food off the coast of Norway. They returned with stories of a beautiful girl called Kraka they had encountered at a nearby farm. Ragnar was intrigued and invited Kraka to join him. However, she was to appear neither naked or dressed, hungry or full or alone or accompanied. Kraka appeared covered in a fishing net and her own hair, having tasted food but not having eaten and with a dog for company. Impressed, Ragnar married her and Kraka revealed her true identity as Aslaug, daughter of the hero Sigurd and shieldmaiden Brynhild.

From these three wives, Ragnar had many sons and daughters. The most famous were Bjorn Ironside, Ivar the Boneless, Sigurd Snake in the eye and Ubbe. These sons would eventually avenge Ragnar’s death. Ragnar’s death came at the hands of King Aella of Northumbria who finally managed to capture Ragnar during one of his campaigns in the North of England. Unable to kill Ragnar with ordinary weapons, Aella flung Ragnar in a pit of snakes. There, Ragnar awaited his inevitable death, passing the time singing of his greatest victories, and boasting to his captors of how he would soon feast in Valhalla where “gladly shall I drink ale with the gods on the high benches.” In between, he promised his captors one thing: they would pay for his death.

What is undoubtedly true is, soon after Ragnar supposedly died in the snake pit, the first serious waves of Viking invasions swept across Saxon England. In 865 AD, the Anglo Saxon chronicle describes how the Great Heathen army swept across the north of England. The leaders of the army, which was composed of warriors from Denmark, Sweden, and Norway, led their men to secure Northumbria for the Norsemen. Then in 867 AD, they moved onto York. The Vikings killed King Aella and King Osbertht.

This invasion sounds like the vengeance that Ragnar Lothbrok foretold; a vast army sent out to avenge the death of their greatest leader, killing the man responsible for Ragnar’s death and conquering new lands for the Vikings in the process. However, while the surface facts fit the legend, actual history does not support the idea of the Great Viking invasion as anything to do with Ragnor Lothbrok. The Anglo Saxon Chronicle that records the events of 865AD and beyond does not mention his name. However, what the Chronicle does mention is the names of some of the leaders of the Great Heathen Army. Two of them are particularly significant: Ubbe and Ivar.

We know that Ubbe and Ivar, like Bjorn Ironside, were real historical figures- not just from the Anglo Saxon Chronicle but from other sources. Their names come up time and again as leaders of Viking forces that tormented France, Ireland, and England in the second half of the ninth century. Ivar the Boneless became the ruler of a Viking kingdom that stretched from Dublin to York. He died in battle in 873. Ubbe meanwhile seems to have outlived him. He died in Devon in 878. Bjorn Ironside is known to have raided along the River Seine between 857- 859 and is credited as a great explorer. Yet there is no historical evidence to suggest that any of these men were the sons of Ragnar Lothbrok, let alone brothers.

In fact, the connection between Ragnar and his so-called ‘sons’ seems to postdate the ninth century by at least a century. In 1070 a Norman historian called William of Jumieges named a Danish King called Lothbrok as Bjorn’s father. Not long afterward, the chronicler Adam of Bremen identified Ivar as a man called Ragnar’s son. Finally, in the twelfth century, Icelandic scholar Ari Porgilsson climbed on the bandwagon. It was he who linked the names “Ragnar” and “Lothbrok” to create one person, so forming the basis for legends of Ragnar Lothbrok. Such a character could not have been the father of Ivar, Ubbe or Bjorn. However, there is the possibility that, like his name, Ragnar Lothbrok could be a composite figure based on actual people.

Aside from the mysterious King Lothbrok who may or may not have been the father of Bjorn Ironside, there are a couple of real historical characters who could have formed the basis of Ragnar Lothbrok. The first is a Danish Viking called Reginheri or Ragnall. Like Ivar, Ubbe and Bjorn, Reginheri was active during the ninth century. A subordinate chieftain of King Horik, in March 845AD, he led 120 ships carrying 5000 warriors up the River Seine to besiege the city of Paris- just like the legendary Ragnar Lothbrok.

Despite having sacked the city of Rouen on their way to Paris, the Vikings were fighting fit. The Annals of Xanten describe the raid as vicious and uncompromising. For two days the Vikings held Paris under siege before the city capitulated. The Vikings had captured 111 men from the city garrison. Instead of keeping them as hostages, Reginheri had them sacrificed to the god Odin as a gesture of thanks for the victory.

However, this bloody act seemed to work to the Viking’s advantage. The Frankish King Karl der Kahle decided he wanted to be rid of these unwelcome and decidedly violent guests without further bloodshed. So he paid Reginheri 7000 pounds of silver and gold to go away. Reginheri was happy to oblige. He led his men back up the Seine, pillaging a few villages along the coast as they set off home. However, once he returned home to Denmark, Reginheri did not enjoy his victory for long. For the Vikings had brought something else back from Paris: a violent form of dysentery. It was from this, rather than a pit of snakes that finished off this particular Ragnar prototype.

The second inspiration for the legendary Lothbrok is somewhat later. Rognvald or Ragnall ua Imair. Ragnall died in 921 AD but was one of the earliest Norse rulers of Northumbria and the Isle of Man after the Great Heathen Army landed in England. Ragnall was one of a group of Vikings had who settled in Ireland sometime during the late ninth, early tenth century. While his kinsman, Sitric became King of Dublin, Ragnall settled himself on the Isle of Mann before moving in on the north of England. Here, Ragnall was more successful than Ragnar. For Ragnall fought Constantin mac Aeda, King of Scotland. While he did not beat the Scottish King, he weaken his hold on the north of England just enough for Ragnall to seize York in 918 and make himself King.

Neither of these figures make a complete Ragnar Lothbrok. Indeed, there are probably other, shadowy Vikings lost in history who never the less influenced the formation of the legend of Ragnar Lothbrok. For ultimately, that is what Ragnar is, a composite figure who acts as an encapsulation of all that the Vikings admired about themselves. In that sense, composite legend or not, Ragnar Lothbrok, is the ultimate Viking hero.