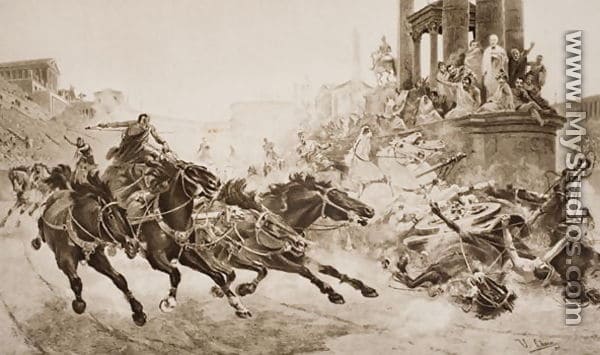 The Roman Emperor Nero is known for many things. Primarily, he is known as one of the most infamous arsonists in history, with many ancient sources claiming he was responsible for a terrible fire that destroyed much of Rome in the year 64 CE, though this claim is disputed.

What is not disputed is his reputation for cruelty, especially concerning his persecutions of early Christian communities; famously tying oil-drenched Christians to columns and burning them alive during the night while watching his morbid work from amongst the crowd. His cruelty was not limited to strangers, however, as he also ordered the assassination of his own mother, and executed one of his wives and kicked the other to death.

However, these types of exploits were not exactly uncommon among Rome’s rulers. More than one Roman Emperor was known for his murderous brutality. Perhaps what distinguished Nero even more than his cruelties were his personal indulgences, which became increasingly public as his egomania developed. In fact, Nero’s life grows stranger and even becomes somewhat absurd, once his personal passions are contemplated.

Nero possessed a deep passion for classical Greek sports and the performing arts. He enjoyed singing, acting, writing poetry, and playing the lyre, as well as horse racing of various kinds. Early on, performing for private audiences was enough to satisfy his interests and his ego. These acts within themselves were not strange, but as time passed his passion for performance came to shock Roman high society. As Nero’s confidence and ego grew, and with fewer people within his circle possessing the will or the inclination to curb his appetites, he made his performances public.

At the time, this was deeply scandalous. Things like singing, acting, and playing instruments in public were not the way respectable and socially distinguished people behaved. For a person as important as Nero, Emperor of Rome, to conduct himself in such a way was considered intensely shameful. But in 64 CE, ten years into his reign, an increasingly indulgent Nero gave his first public performance. Most considered it horrifying to see an Emperor demean himself on stage.

Many came to the conclusion that even the gods were offended when a short time after, the theater in which Nero held his performance was destroyed by an earthquake. Undeterred, within a year he performed once more, this time in the city of Rome itself, further reinforcing growing tensions between himself and the Roman Senate.

However, his public performances were nothing compared to what was to come a few years later during the Olympic Games. Though the games were not scheduled to be held in 67 CE, Nero forcibly changed the year of the games so that he may participate as a competitor while on an extended tour of Greece. While this may not seem as a big deal to a modern person, the Olympic Games were a sacred part of Greek culture. Changing the ancient Olympic calendar was deeply offensive. The ancient Olympics were not secular events as they are today. They were sacred occasions infused with religious meaning and spiritual gravity. Therefore, strict, religious-like rules were applied.

It was within this harsh and sanctified context that Nero committed some of his most eccentric and public offenses. Changing the revered Olympic calendar was not his only transgression. He changed the character of the games themselves, introducing artistic competitions for the first time such as lyre-playing, trumpeting, formalized heraldic contests, as well as acting and singing competitions. He entered many of these contests himself, despite not being Greek-born. Of course, he won all the contests he entered, further shifting the nature of the games from the sacred to the profane.

As outrageous as were the creation of contests specifically to indulge his personal interests, even greater offenses were to come. He entered a chariot race in which participants were supposed to use only four horses. Unbelievably, he arrived with ten horses. Incensed, but unwilling to stop him, officials allowed Nero to participate in the race. Despite such a massive advantage, he did not fair well. Nero was no athlete, known to be overweight and out of shape.

Shortly after the race began, he lost control of his chariot while entering a turn, injuring himself so severely, it almost killed him. Nero’s nearly fatal accident was not the most outrageous part of the race, however, as he was proclaimed the winner, even though he was unable to finish the race, due to severe injuries.

It is interesting to speculate what other sorts of madness Nero may have inflicted upon Greek spiritual culture had he the opportunity to stay longer, as he intended. However, his trip to Greece was shortened, as his advisors implored him to return to Rome, where a plot against his life was unfolding. His various indulgences and growing discontent with his rule among powerful elements of Roman society forced Nero to flee the city in disguise. Nonetheless, it was not long before he was found. Terrified of a painful and humiliating execution, he decided instead to commit suicide.

Ultimately, Nero died just as he lived – conceited and indulged. Unable to end his life on his own, he received help from a trusted advisor. A self-centered egotist until the end, before a knife was put to his throat, the Olympic victor melancholically proclaimed “what an artist dies in me!“