12 of History's Most Influential Poets, From Ancient Times Until the 20th Century 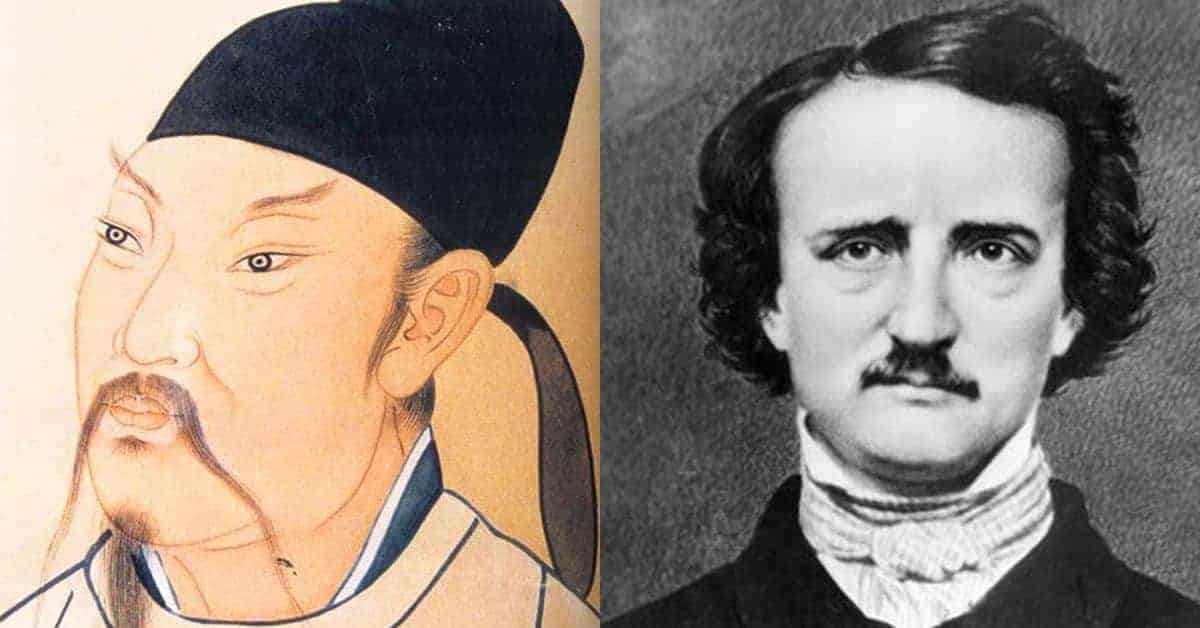 12 of History’s Most Influential Poets, From Ancient Times Until the 20th Century

Ah, distinctly I remember it was in the bleak December;
And each separate dying ember wrought its ghost upon the floor.
Eager I wished the morrow; – vainly I had sought to borrow
From my books surcease of sorrow – sorrow for the lost Lenore –
For the rare and radiant maiden whom the angels name Lenore –
Nameless here for evermore.

And the silken, sad, uncertain rustling of each purple curtain
Thrilled me – filled me with fantastic terrors never felt before;
So that now, to still the beating of my heart, I stood repeating
“‘Tis some visitor entreating entrance at my chamber door –
Some late visitor entreating entrance at my chamber door; –
This it is and nothing more.”
Edgar Allan Poe – excerpt from The Raven

A central figure of the Romantic movement in the US, Edgar Allan Poe (1809 – 1849) was a poet, writer, editor, and critic famous for his cultivation of mystery and the macabre. Best known for his poetry, he was also an influential prose writer who created unrivaled atmospheres in his tales of horror, invented the detective story genre, and was a pioneer in the emerging field of science fiction.

Born into a family of actors, Poe’s father abandoned the family when he was a year old, and his mother died when he was two. He was raised in Richmond, Virginia, by his godfather John Allan, from whom Poe took his middle name, and who took him to Britain to receive a classical education. Returning to America, Poe enrolled in the University of Virginia, but ran up high gambling debts while there so his godfather forced him to withdraw. Poe’s dissolute habits, coupled with his desire to become a poet in defiance of his godfather’s wishes that he pursue a respectable career, eventually led to a falling out and parting of ways.

Poe enlisted in the army in 1827, and his literary career began humbly that year with the publication of Tamerlane and Other Poems. Soon thereafter, he switched to prose and became a literary critic, but drink and drugs were the banes of his life, and he drank himself out of many a job with periodicals and journals, which led to frequent moves from city to city, including Philadelphia, Baltimore, and New York, in search of work.

On the upside, drink and drugs induced in him feverish dreams that helped take his writings down creative paths none had trod before, and lent his work, the best of which was devoted to terror and sadness, an unmatched aura and edge. In 1845, he published The Raven, which became an instant success and things finally seemed to be on the upswing, but then his wife died in 1847, and he never recovered. Poe died in 1849, reportedly drinking himself to death, although other causes such as drugs or tuberculosis have been suggested.

I’ve known rivers:
I’ve known rivers ancient as the world and older than the
flow of human blood in human veins.
My soul has grown deep like the rivers.
I bathed in the Euphrates when dawns were young.
I built my hut near the Congo and it lulled me to sleep.
I looked upon the Nile and raised the pyramids above it.
I heard the singing of the Mississippi when Abe Lincoln
went down to New Orleans, and I’ve seen its muddy
bosom turn all golden in the sunset.
I’ve known rivers:
Ancient, dusky rivers.
My soul has grown deep like the rivers.
Langston Hughes – The Negro Speaks of Rivers

A poet, playwright, novelist, columnist, and social activist, Langston Hughes (1902 – 1967) was a leader of the Harlem Renaissance in New York City, and a pioneer of jazz poetry who made the African American experience the subject of his writings. His signature poem, The Negro Speaks of Rivers, was published in the summer after his high school graduation and attracted significant literary attention.

Born in Joplin, Missouri, Hughes’ parents separated soon after his birth and he was raised by his mother. He attended Columbia University for a year, during which he fell in love with nearby Harlem, then was bitten by a wandering bug, took a job on a freighter, and sailed around the world. During his seafaring years, Hughes visited various parts of West Africa and Europe, before jumping ship to temporarily live in Paris, followed by a stay in England, returning to America in 1924.

He worked as a busboy in a Washington, DC, hotel, where in 1925 he placed three of his poems beside the plate of America’s most famous poet of the day, Vachel Lindsay. Impressed, Lindsay publicized his discovery of a “negro busboy poet”, which garnered Hughes broader notice and helped land him a scholarship to attend Lincoln University. By the time he graduated in 1929, Hughes had published two volumes of poetry, won a prestigious literary award, wrote for major publications such as The Nation, and helped launch an influential literary magazine, Fire!

After graduation, he traveled widely to the USSR, Japan, Haiti, and elsewhere, and served as a newspaper correspondent during the Spanish Civil War. A prolific writer, he published a short story collection in 1934, wrote a Broadway play in 1935, and produced a number of plays in the late 1930s. He also founded theatrical companies in Harlem in 1937 and Los Angeles in 1939, and published the first volume of his autobiography in 1940, with a second volume coming out in 1956.

In 1961 Hughes penned Black Nativity, a play which became an international success, in which he used poetry, combined with biblical passages and gospel standards, to retell the story of Jesus’ birth. He documented African American culture and literature in a number of anthologies, such as The Poetry of the Negro in 1949, and The Book of Negro Folklore in 1958, and continued writing poetry until his death in 1967.