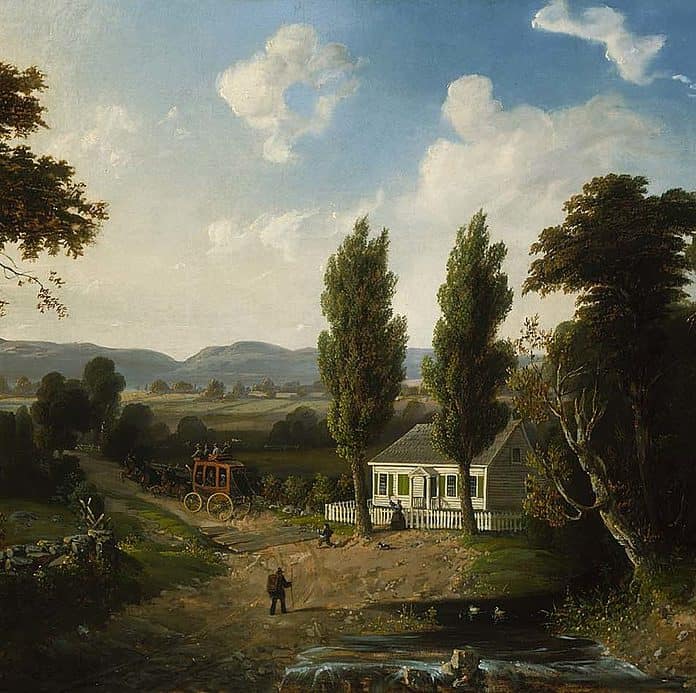 When Charles Dickens, not quite thirty years old, arrived in the United States for his first visit to the country in 1842 his fame preceded him. The success of his Pickwick Papers and Oliver Twist, and especially The Old Curiosity Shop, had made him wildly popular in America, and Americans flocked to see him. He was feted in cities and towns as he traveled the country. He encountered American technological advances such as canals and railroads, and even a system which combined both. He traveled by stage, omnibus, rail, and steamboat. He visited hospitals and prisons, warehouses and workhouses, and toured the largest cities and small rural towns.

Along the way he observed American manners and behavior, political gatherings and patriotic celebrations, lectures and church services. Little escaped his eye, less his pen. When his observations were produced in print in the fall of 1842 his popularity in the United States plummeted due to his acidic comments over some areas of American society. Yet he also extolled some aspects of America and its technological prowess. His condemnation of slavery was itself condemned in the American South, and he expressed concern at the levels of violence he observed throughout his trip. Here is the story of his remarkable tour of America in 1842.

1. The trip was for both business and pleasure

When Dickens arrived in the United States, disembarking in Boston in January, 1842, he had several plans for his stay. He wanted to inspect facilities for prisoners, the mentally ill, and the poor, expecting to find them in a better state than those to be found in England. He was particularly interested in institutions for the blind, deaf, and mute. Schools and libraries were also of interest. He was at first astounded by the reception in America. Crowds cheered him upon arrival and followed him about Boston’s streets whenever he ventured forth. He soon found the constant adulation intrusive and annoying. He also found his work available in shops and from street vendors.

Charles Dickens wrote his early novels in serial form, publishing them chapter by chapter in periodicals. This allowed him to respond to feedback from readers as the story slowly unfolded. The Old Curiosity Shop crossed the Atlantic to the United States one chapter at a time, and crowds formed as ships docked, calling out for details from the latest chapter. They were immediately published by multiple newspapers and magazines in the United States, and later in bound volumes. In the absence of international copyright agreements, Dickens received not a penny for US sales of his work. He intended to argue for international copyright protection during his sojourn in America.