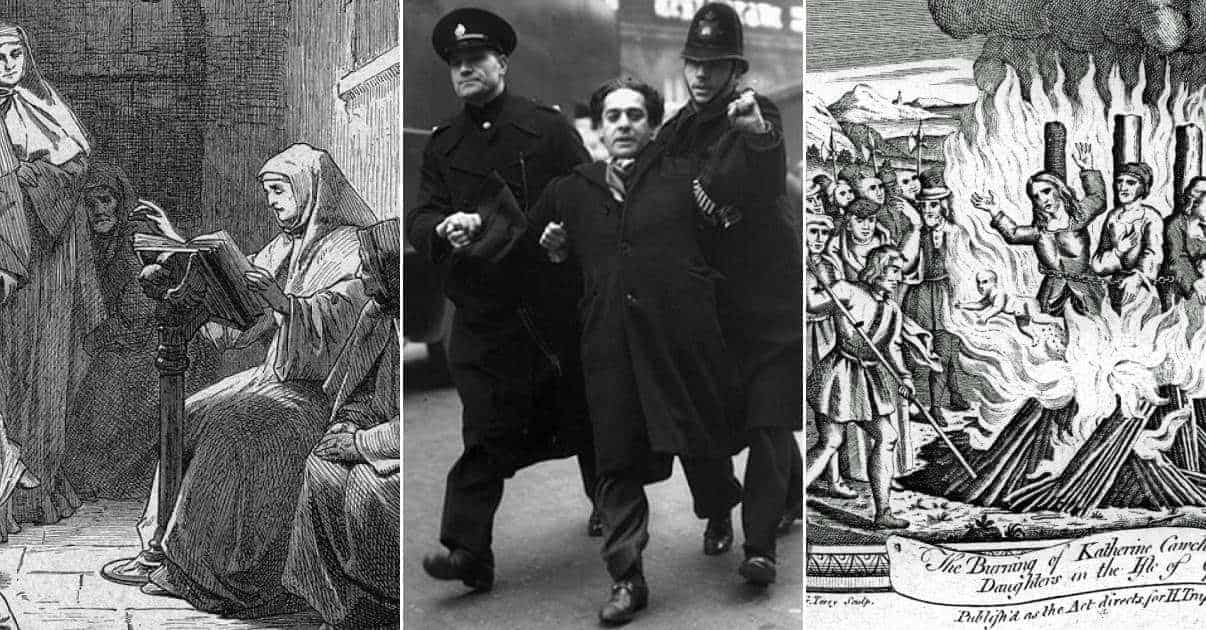 In November of 1803, reports began circulating of ghost sightings in the Hammersmith district in west London. Many thought that the ghost was that of a recent suicide buried in Hammersmith’s churchyard, which was in line with a widespread contemporary belief that suicides should not be buried in consecrated grounds, because their souls would then find no rest there.

The ghost was described by all who saw it as being very tall and dressed all in white, with some witnesses adding horns and glass eyes to the description. Alarm at the sightings quickly grew to widespread panic, and then mass hysteria, as more and more people stepped forward to report that they had not only seen the Hammersmith ghost, but had been attacked by it as well. In response, fearful citizens took to arms and began patrolling the neighborhood.

On the night of January 3rd, 1804, one of the armed citizens, Francis Smith, was on patrol when he came across a bricklayer, Thomas Millwood, returning home from a visit to his parents while clad in the typical clothing of his trade: white pants, white shirt, and white apron. Leveling his shotgun at what he took to be the ghost, Smith shot Millwood in the face, killing him instantly.

Smith was arrested and tried for willful murder. The presiding judge instructed the jury that establishing malice was not necessary for a conviction, and that all killings were either murder or manslaughter, absent extenuating circumstances that were not present here. Smith was duly convicted, then sentenced to death, which sentence was subsequently commuted to a year’s hard labor. As to the Hammersmith “ghost”, it later emerged that it was an elderly local shoemaker who wore the guise to frighten his apprentice.

In 1938, the town of Halifax in England was gripped by a mass hysteria that lasted for about two weeks, during which an imaginary attacker fell upon local women. It all began on the night of November 16th, 1938, when two young female employees of a local mill were attacked by an unknown man, and rushed to a nearby house for aid, with blood streaming down their heads from a wound apparently caused by a razor blade.

Police were called, a report was filed, and disquietude spread throughout the community. As described by the Halifax Courier, the local newspaper: “Until the culprit is found and effectively dealt with there is not likely to be much peace of mind, not only [locally] but further afield. The affair has created a tremendous sensation and it has thoroughly upset the people“.

Five days later, another young woman in the vicinity reported being attacked by a man, who left her with a deep and clean-cut to her wrist, as if from a razor. Notwithstanding a clear description of the attacker, police had no luck finding him. When three days later another victim stepped forward, the authorities turned to the public for leads, and the local newspaper carried the headline: “£10 police reward for the arrest of Halifax ‘Slasher’“.

With news that a “Slasher” was in their midst, mass hysteria gripped the community. Even as Scotland Yard was called in to help the local police, businesses in Halifax and its surroundings shut down. The panic grew apace as more and more reports, and rumors of reports, all of them unfounded, came pouring of new attacks by the Slasher in surrounding towns.

Out on the streets, wild-eyed vigilante groups were set up and started patrolling the region, which set upon and beat up many a stranger whom they came upon and mistakenly assumed was the Slasher. After a woman alleged that she had been attacked, a local Good Samaritan who had gone to help ended up being wrongly accused by vigilantes of being the Slasher, and was set upon by a mob. Only the intervention of police, who escorted him home, saved his life.

The mass hysteria finally began to subside when, on November 29th, one of the “victims” of the Halifax Slasher admitted that his injuries had been self-inflicted. Other supposed victims soon confessed that they, too, had made up the attacks, and after 9 of 12 “victims” confessed to self-harm, Scotland Yard concluded that there had never been a “Halifax Slasher” and closed the investigation. Five locals who had filed false reports were arrested and charged, of whom four ended up doing time in prison for public mischief.

For a fortnight in 1956, the population of Taipei in Taiwan was terrorized by rumors of a crazed slasher roaming the streets, surreptitiously slicing people with a razor blade as he brushed past them, then disappearing into the crowds and teeming throngs of the city. About twenty-one victims were reported, mostly poor and poorly educated people from the lower classes.

A typical example was that of an older gentleman who told police that he had been slashed by a stranger. After a medical examination revealed that the injury was caused by a blunt object and could not have resulted from a razor, the “victim” admitted that he did not really know how he had been injured, but assumed that he must have been slashed “because of all the talk going around“.

Another example of a phantom slasher attack was caused by incompetent doctors who examined another older gentleman who showed up with a laceration on his wrist. When the patient casually mentioned that a stranger had brushed against him around the same time that he noticed the bleeding, the doctors put two and two together and came up with nine, attributed the wound to the feared slasher, and contacted police. A follow-up examination by more competent doctors revealed that the laceration was simply an old wound that had been reopened by scratching.

In reality, there had never been a slasher, but simply a mass delusion or hysteria, amplified by sensationalist press reporting. After thorough investigation, police concluded that the “victims” had simply suffered the kinds of everyday accidental cuts and slight injuries that most people endure from time to time without hardly noticing. In the fevered atmosphere of the slasher scare, people simply attributed any rip in their clothes or scratch on their bodies to a surreptitious attack from the imaginary slasher. As the final report of the police investigation put it, out of twenty-one reported “victims” of the crazed slasher: “five were innocent false reports, seven were self-inflicted cuts, eight were due to cuts other than razors, and one was a complete fantasy“.

In 1962 a mass hysteria episode, in which people started laughing uncontrollably, began in the village of Kashasha on the western shore of Lake Victoria in Tanganyika (modern Tanzania) and quickly spread throughout the surrounding region. By the time it subsided months later, the mass hysteria had affected thousands of people, and led to the closure of 14 schools.

It all started on January 30th, 1962, when a girl in a missionary boarding school had a fit of anxiety-induced laughter, and started cackling uncontrollably. She was soon joined by two of her friends, and it was not long before the contagion had spread and engulfed the school. Within a short time, 95 out of the school’s 159 students were also laughing uncontrollably. It got bad enough that the schoolgirls were unable to concentrate, and the school was forced to shut down 6 weeks later.

The afflicted students took their mass hysteria with them when they were sent back to their families, and within a short time of returning home, the contagion had spread from the schoolgirls to the surrounding community. Before long, students in other schools in the region were afflicted as well. The symptoms consisted in the main of recurring bouts of uncontrollable laughing and crying that lasted from a few hours to over two weeks, combined with a general restlessness, aimless running around, and the occasional resort to aggressive violence. Doctors could find no physical cause for the contagion.

By the time the mass hysteria subsided about a year later, 14 schools had closed down, and thousands had been afflicted. Subsequent investigation attributed the initial outbreak to stress among the schoolgirls, who found themselves in an alien environment within the missionary-run boarding school – the outbreak affected only the schoolgirls, without touching any of the teachers or staff. Beyond the school, the surrounding population was dealing with the stress and uncertainty of their country’s future, as Tanganyika had gained its independence only a month before the mass hysteria eruption.

In 1983, a mentally unstable mother accused Ray Buckey, an employee of the McMartin preschool in Manhattan Beach, California, of raping her child. She also went on to add that people in the day school had sex with animals, that Ray Buckey’s mother and preschool owner Peggy McMartin had perforated a child under the arm with a power drill, and that “Ray flew in the air”.

Police were skeptical, but nonetheless sent a letter to other parents at the school, asking them to question their children about abuses at the school. As parents talked to their children and other parents, other accusations of child sexual abuse began trickling in, and soon turned to into a flood of wild, weird, and increasingly incredible accusations of sexual abuse that stretched credulity amidst a mass hysteria of false accusations.

Social workers were brought in to gather more information, and between a combination of incompetence and leading questions, the children’s accusations grew steadily wilder and more bizarre. In addition to being molested by Ray Buckey and his mother Peggy McMartin, the children alleged that they had been made to participate in satanic rites in which they were forced to drink the blood of a baby whom they had witnessed being sacrificed in church.

The children also said that they saw witches fly, that they had been abused in a hot air balloon and in (nonexistent) tunnels beneath the preschool, and one child claimed to have been sexually molested by actor Chuck Norris. Other children added that, after being abused in secret rooms, they were flushed down toilets, then cleaned up and presented to their parents.

Although the accusations were incredible, they came at a time when the country was in the grip of widespread fears of ritual sexual abuse of children, connected in some way to satanic worship and dark magic rites. With elections drawing near, ambitious Los Angeles District Attorney Ira Reiner unscrupulously sought to capitalize on the mounting public hysteria, and slapped Ray Buckey and his mother Peggy McMartin with 208 counts of child molestation.

Buckey and his mother were arrested in 1984, and the investigation lasted for three years, until 1987. Mother and son were then put through a 3-year trial, which lasted from 1987 to 1990. It was the longest and most expensive criminal trial in American history. At its conclusion, a jury acquitted Peggy McMartin of all charges, while Ray Buckey was acquitted of 52 of 65 charges, with the jury deadlocked on the remaining counts 10 to 2 in favor of acquittal. Those charges were then dropped, and the mass hysteria and subsequent trial concluded without a single conviction.

Medium – The Plague That Made People Dance Themselves to Death

BBC Culture – The Town That Nearly Danced Itself to Death

History of Yesterday – Mass Hysteria and Murder: The Tale of the Hammersmith Ghost

STRANGE ATTRACTOR – The Ballad of the Halifax Slasher