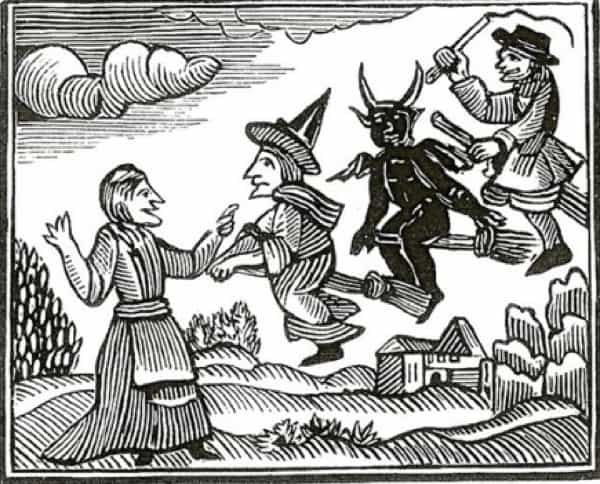 Witch Tests: 10 Historical Tests for Proving Someone Was a Witch

Spectral evidence was a form of witch test that was particularly rife in protestant society. It referred to the belief that an accused witch’s spirit or “spectral shape” could appear to their victims in dreams while the witch’s body lay elsewhere. People believed that the devil could not take the form of any person who was innocent of ties to him. So, if anyone saw- or said they had seen a suspected witch in spirit form- there was every chance that that individual was indeed a witch.

Examples of spectral belief arise in a variety of cases of witchcraft. One of the ‘proofs’ offered against the Clarke family of Wigston Magna, Leicestershire was that they appeared to their victims at night “in their own and other shapes.” At the trial of Alison Device in August 1612, the peddler John Law testified how the witch came to him in spectral form while he lay incapacitated in the inn at Colne. The specter “stayed not long there” and only “looked on him” before going away. However, he was left “sore afraid” and was tormented by the apparition “both day and night.”

The biggest problem with spectral evidence was it could not be tested and so could be simple fancy- or an outright lie. However, it was proof of witchcraft offered again and again during the Salem witch trials. In making a judgment about the validity of spectral evidence for securing a conviction, the judges turned their attention to witch trials in England that had delivered guilty verdicts based on spectral evidence. The model for their decision was “A trial of witches” written by Gilbert Geis and Ivan Bunn. In particular, the judges’ attention was focused on the case of Amy Denny and Rose Cullender who were convicted and hung in Lowestoft, Suffolk 1662.

Both women were elderly widows. Cullender came from a landowning family while Deny was the widower of a laborer. Both were accused of bewitching thirteen children, causing the death of one. At the trial, testimony was given by some of the bewitched children “that Amy Duny and Rose Cullender would appear before them holding their Fists at them, threatening, That if they related either what they saw or heard, that they would Torment them Ten times more than eve they did before.”

As with the Suffolk case, many of the Salem girls claimed to have been visited in dreams by the accused witches. One was Goody Proctor who reputedly “bit pinched and almost choked” them despite her insubstantial form. The similarities were enough for the judges to allow spectral evidence as admissible evidence at the trial although they did not make convictions on spectral evidence alone, as Cotton Mather had advised them that in some cases, the ‘spectres’ could be illusions from the devil.

However, ultimately, prejudice was the only evidence required to identify a witch.

Ultimately, accusations of witchcraft were based on fear and prejudice. Any individual who stood out from the crowd or did not conform to the social norm was at risk if being judged a witch. Sadly, this meant many individuals suffering from mental illnesses or who exhibited eccentric behaviors because of age or infirmity were at risk. Such people included those afflicted with epilepsy, Schizophrenia, or age-related dementia. According to the National Institutes of Health, which is part of the U.S. Department of Health and Human Services “a large number of the alleged witches and possessed persons who were burned probably had visible mental disturbances.”

Odd behavior in women was particularly suspected. The Malleus Maleficarum, drawing on the writings of the ancient philosophers constructed an image of women as inherently weak and corrupt- and so especially susceptible to demonic influence. The womb was described as a source of evil, which explained why women were so venomous at menstruation. Women were “more ready to receive the influence of a disembodied spirit.” In doing so they would become a witch and, as a result, their natural erratic tendencies would simply become more exaggerated or perverse.

Talking to yourself was a particularly suspect behavior, especially if the words were inaudible, leading to assumptions that the individual was muttering spells under their breath. This was just one of the traits exhibited by Pendle Witch Anne Whittle alias Chattox which were used as proof of her witchcraft. At the time of her trial in 1612, Chattox was an old lady of around 80 and probably suffering from dementia. However, her eccentric behavior was used against her when the judges were told how Chattox was always “more ready to do mischief to men’s goods, then themselves, her lips ever chattering and walking: but no man knew what”.

Where Do we get our stuff? Here are our Sources:

The Horrifying Tests used in Salem to Determine if a Woman was a Witch, Barbara Stepko, The Vintage News, Oct 23, 2018

18 Reasons One is Executed for Witchcraft during the ‘Burning Times’, D.G. Hewitt, History Collection, January 6, 2019

The Nine-Year-Old Girl Who Accused Her Family of Witchcraft, Lioness Rue, History of Yesterday, Oct 20, 2020