"I Am Only A Patsy": 6 Reasons why Lee Harvey Oswald was NOT JFK's Killer 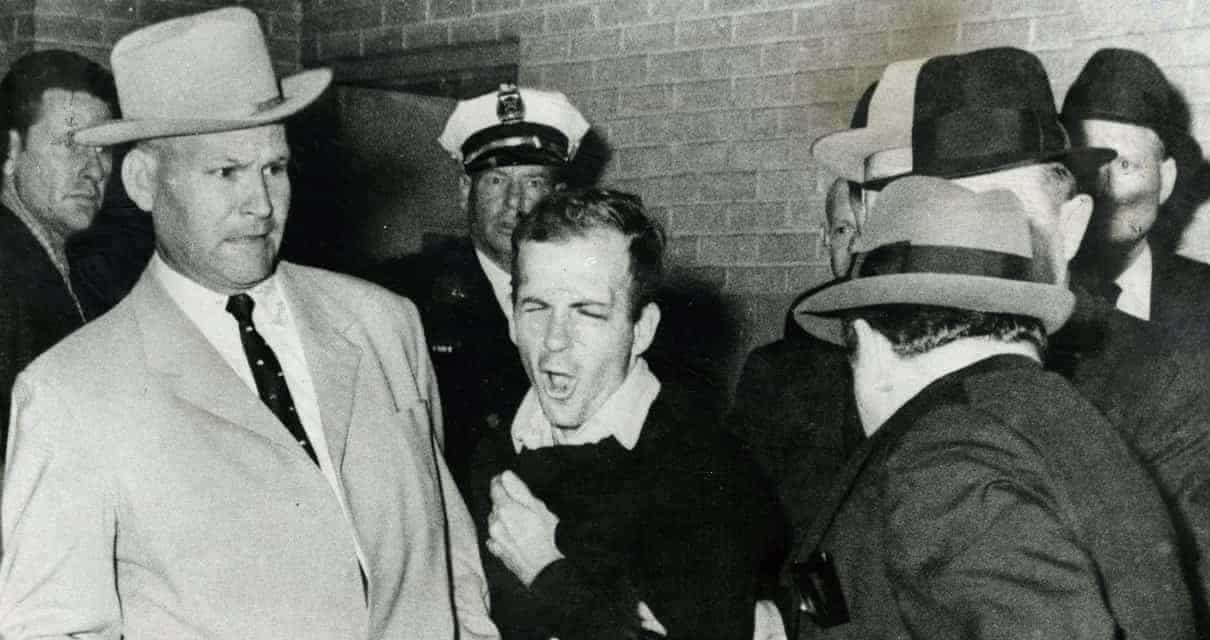 “I Am Only A Patsy”: 6 Reasons why Lee Harvey Oswald was NOT JFK’s Killer

The Single Bullet Theory was used by the Warren Commission to fit in with the idea that only three bullets were fired by the assassin. The ‘theory’ evolved over time when new evidence came to light. Then the news came that James Tague, an innocent bystander, was struck by fragments from one of the bullets, so it was up to the Commission to create a theory that didn’t conflict with their available evidence.

Eventually, it determined that one bullet was responsible for all the non-fatal injuries sustained by Kennedy and Connally. It entered the President’s back, exited via his throat, entered Connally’s back, and exited via his chest after passing through his right wrist; then it lodged in his left thigh. Another bullet entered the President’s head while Tague was struck by the third bullet.

The main evidence in support of the Single Bullet Theory is that no bullets or bullet fragments were discovered in the President’s body; there were only fragments from the bullet that hit him in the head.

Practically every element of the Warren Report came under fire, but nothing drew more derision from skeptics than the notion that a single bullet caused so much damage to Kennedy and Connally. In fact, Connally told the Commission that he was hit in the back by a bullet fired later than the ones that hit the President. He maintained for the rest of his life that he was struck by a different bullet. The Governor’s wife and a police motorcyclist beside the motorcade both testified that Connally was struck by a separate bullet.

The famed Zapruder film appears to prove the Governor right. In Frame 225, the President is holding his throat; he had almost certainly been hit at this point. There are no signs of Connally sustaining a wound until Frame 238, some two-thirds of a second later. At that point, he fell. The conclusion is that the bullet that hit Connally was fired after the bullet which hit the President in the throat. Also, there is no way that Oswald could have fired two bullets so close to one another given the rifle he used.

There is a multitude of other objections to the Single Bullet Theory. For example, given the President’s position when he was struck, there is no way a single bullet could hit the parts of the back and throat where he had the wounds. Either his throat wound is too high up, or his back wound is too low down for the Single Bullet Theory to hold water.

Overall, the length of time between the shots, the weapon’s capabilities and the nature of the injuries sustained by the President and the Governor pretty much rip the Single Bullet Theory to shreds. It also casts grave doubts on the idea that Oswald was the Lone Gunman. Although almost everyone in the crowd heard only three shots, the wounds on the President, Connally, and Tague suggest there could have been more. The low quality of Oswald’s rifle means he couldn’t have executed the shots in such a short space of time.

We can wrap everything up by saying there simply isn’t enough evidence against Oswald to conclusively state he was the shooter. Indeed, most of the available facts suggest he almost certainly wasn’t JFK’s killer. If Jack Ruby hadn’t murdered Oswald a couple of days after the assassination, the prosecution would have struggled to get a guilty verdict based on the case they could build. Whether Oswald would have been convicted anyway is another matter entirely.

Evidence of his guilt is incredibly flimsy; right from the moment he supposedly brought his rifle into the Depository until right after his arrest following the alleged murder of Tippit. There is even evidence that points to Oswald being a ‘patsy’ as he claimed upon his arrest. His pro-Communist views made him an easy target; add in his life in Russia and pro-Cuban stance, and painting him as anti-American is a simple task. He was a sharpshooter in the Marines (albeit not a very good one) and had a history of violence, so he apparently had the capability to commit murder.

The Warren Commission never bothered to investigate the possibility that the killer was anyone other than Oswald, even in the face of a vast array of evidence. It had reached its verdict before the investigation had ever been launched in what was a shocking dereliction of duty. For instance, Buell Wesley Frazier, the man who drove Oswald to the Depository on the fateful day, is adamant that the package Oswald brought to work (which he claimed were curtain rods) was nowhere near big enough or large enough to hold a rifle even if the stock was disassembled from the barrel. He claimed the Dallas police detectives wanted him to confess to being part of the murder plot despite it being completely false. According to Frazier, the police kept asking him to change his testimony.

Although eyewitnesses at the scene say they heard the gunshots and saw a gunman at the easternmost south-facing window on the sixth floor of the Depository, photographic and medical evidence suggests otherwise. Then there is the Single Bullet Theory which has been more or less dismantled. Again, witnesses say they only heard three shots, but medical and forensic examination revealed that it was virtually impossible for all the injuries sustained by Kennedy, Connally, and Tague to have been caused by only three bullets. Then there is the small matter of Oswald lacking the ability even to hit the President from his supposed position.

While a couple of witnesses claim they saw Oswald on the sixth floor that day, it was over 30 minutes before the shooting. It was almost impossible for him to run down to the second floor where he was seen less than two minutes later from the sixth floor. Also, the two men who saw him at that stage remarked that he seemed calm and not out of breath. Surely, a dash down four flights of stairs would have caused even the fittest person to breathe a little heavier? In a photo, he was mistaken for Billy Lovelady, but there was a second person standing by the doorway which could have been Oswald.

He was also accused of murdering Patrolman J.D. Tippit even though the evidence suggests otherwise. Upon his arrest, Oswald was tested for gun residue, and the results revealed that he did not fire a rifle that day.

Overall, the only way Oswald could have been guilty is if an enormous number of people lied or were mistaken. The three witnesses who said he either didn’t bring a bag or didn’t have a large enough bag to match the one found at the scene of the shooting must have been mistaken. Two witnesses saw him on the second floor just 7 minutes before the shooting. The Commission claims the gunman was on the sixth floor at least 15 minutes before the assassination. Also, another witness says he saw the gunman on the sixth floor at the time Oswald was sighted on the second floor. All lies?

The people who heard shots from the grassy knoll must also have been wrong as were the doctors who said the President’s throat wound was the entry point for the bullet and not the exit. Connally, his wife and the police motorcyclist who claim the President was hit with separate bullets must have been wrong too. Add in the fact that the U.S. Army’s best shooters, along with others from the FBI, were unable to replicate Oswald’s shots despite being better marksmen, and you have more than enough evidence that the wrong man was blamed.

The Warren Commission already concluded that Oswald was the killer before it began its investigation. As a result, it latched onto incomplete or false evidence and ignored anything that contradicted its original conclusion. Therefore, can we really trust its final verdict? Most people say ‘no’ so now, let’s look at alternate theories.

CBS News – Accused JFK Assassin Is Arrested, Then Gunned Down

The New York Times – Gov. Connally Shot; Mrs. Kennedy Safe; President Is Struck Down by a Rifle Shot From Building on Motorcade Route— Johnson, Riding Behind, Is Unhurt

History – What Physics Reveals About the JFK Assassination

History – The Other Victims of the JFK Assassination

The New York Times – A Secret Service Agent Remembers: ‘I Wish I Had Been Quicker’