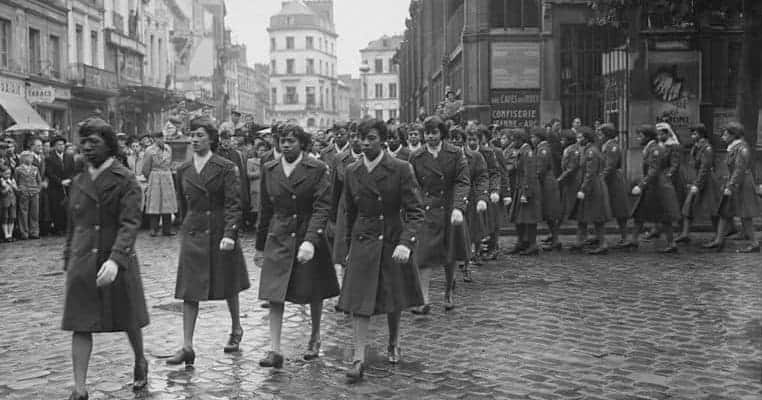 During the Civil War, women disguised themselves as men to fight in battle. For the majority of women, the disguises worked as many of them were only found out to be men when they had died in battle. All this would change for women during the first World War when they were legally allowed to serve in the army. However, there was still much segregation as the majority of the women would not make it to the front lines on the battlefield.

The daughter of ex-slaves, Mary McLeod Bethune, was born in 1875 and spent her life fighting for a better life for African Americans. She became one of the female leaders during the Civil Rights era, with a legacy continuing even after her death in 1955. By the time the United States entered World War II in 1941, there was a shortage of soldiers. Bethune quickly realized the importance of African American women in the war and, with the help of First Lady Eleanor Roosevelt, who admired Bethune, made it happen.

Together, Roosevelt and Bethune created the first all-black female battalion which would go to war in Europe. With the formation of the Women’s Auxiliary Army Corps in May of 1942, all women, no matter what race, could legally join the army. The recruitment and training of women started and before long, the following July, women were given the army’s full benefits, which was something women did not receive before. Even when women could be nurses in the military, they did not receive pay or benefits.

Women In The Military As Segregation Still Continues

Continuing changes for the women’s division started when their name changed from the Women’s Auxiliary Army Corps to just the Women’s Army Corps. Soon the military was busy training women to fight in all sections in preparation for World War II. Of course, all women still faced several challenges and separation. For instance, the army concluded that women had to have a similar structure to males, such as age and weight requirements. On top of this, they had to pass a physical and intelligence test.

Another Problem Arises As The Women Train

With World War II raging on in Europe, another problem started to arise: a backlog of mail. By the beginning of 1945, Birmingham, England’s warehouses became filled with mail intended for the military personnel of all divisions. Soldiers, nurses, and other military staff in World War II were not receiving their letters. Christmas packages still sat in the warehouses waiting to be sent to their receiver. Part of the problem was some of the mail was addressed poorly with “Buster, United States Army” or a common name, such as William Smith.

Soon people started wondering who would take care of the backlog of mail. While the Adjutant General’s report stated the postal division had a plan to handle such a delay, the whole system was in chaos by this point. By this time, the United States army had transferred several white women over to Europe to aid in various divisions. After much discussion, the European theater stressed the need for the War Department to send African American military personnel to help aid with the postal problem.

The War Department quickly responded, and soon an African American female military unit went off to make history in Europe. What became known as the 6888th Central Postal Directory Battalion started with 817 African American women. This group of military personnel, which later grew to 824, came from several military divisions including the Army Service Forces, Women’s Army Corps, and the Army Air Forces. The War Department appointed 31 women from the 824 to become officers of the 6888th Central Postal Directory Battalion.

Given the nickname “Six Triple Eight,” The 6888th Central Postal Directory Battalion quickly became further organized for their mission. They received a headquarters for administrative staff and Companies A, B, C, and D service staff support. On top of this, a first lieutenant or a captain would command all units. The War Department appointed Charity Edna Adams for this position. The Six Triple Eight then went off to Fort Oglethorpe, Georgia, where they trained for their mission.

During their training, the women not only had to wear gas masks as they crawled under logs and jumped over trenches, but they also took courses. These courses were brought in to help women identify enemy ships, weapons, and aircraft. They also learned to how to board a vessel, escape a boat, and climbing rope. After their exhaustive four to six-week training in Georgia, they were sent to Camp Shanks, New York, by train to head overseas to Europe.

The first unit of the 6888th Central Postal Directory Battalion boarded the ship Ile de France on February 3, 1945, for Europe. It was not long before they received a taste of war as on their journey, they came across Nazi U-boats which sent a German V-1 rocket exploding near their ship, making all the women run for cover. Once they arrived, they were not sent straight to the warehouses. Instead, the women were to march in a parade for Lieutenant General John C. H. Lee.

A few days after the parade, the second part of the Six Triple Eight arrived in Europe and the members of the unit headed to their first warehouse. Of course, the ladies had no idea what to expect so when they walked in for the first time; they were disappointed in what they saw. Not only were the warehouses dimly lit with no heat, but the warehouses were also packed from floor to ceiling with letters and packages.

On top of the massive backlog of mail, the women of the Six Triple Eight noticed that dozens of rats had taken over some packages which contained spoiled food, such as cakes and cookies. The windows were blackened out to protect people on the inside during nighttime raids. However, the women soon let go of their discouragement and remembered their motto of no mail, so they quickly got to work. Together the women, joined by some French civilians, figured out a system to sort the mail so they could send it to the right person.

The women, dressed in long johns and extra layers of clothing to keep warm, started investigating each piece of mail to redirect it. They created nearly seven million information cards which tracked each servicemember. To distinguish members with the same name, they went by numbers. With this system, the women processed over 65,000 pieces of mail during each shift, clearing six months of correspondence within three months. After Birmingham, the unit went off to Paris in October of 1945 and then sent back to the United States and discharged in February of 1946.