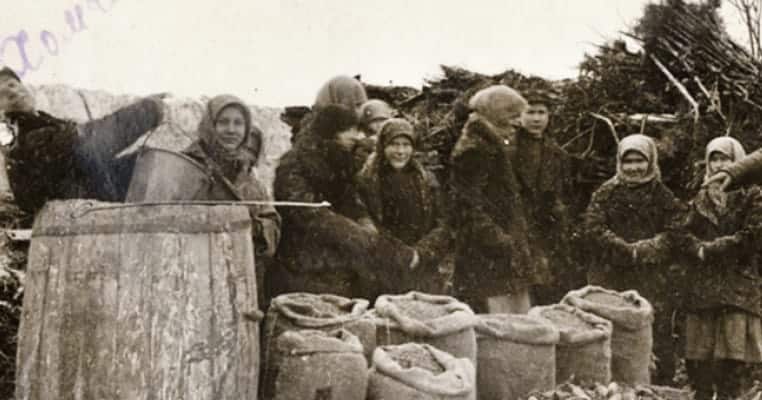 Failed Harvest and the Confiscation of Grain

Among the many tragedies surrounding the Great Famine is that it had been predicted, years in advance. Objective observers, witnessing collectivization’s early trial runs in the late 1920s and early 1930s, sounded the alarm about the expected chaos and turmoil, and the negative impact on the harvests and the distribution networks that took produce from the fields to consumers. As early as 1930, academics and advisers to the authorities in the Ukrainian SSR predicted that famine was inevitable if collectivization was continued at its current pace. They were roundly ignored.

A key factor was the Soviet authorites’ decision to ignore the incentives driving the peasants. Collectivization sought to increase the grain available to feed the steadily growing industrial population in the cities, while paying the peasants a state-mandated pittance for their work, unrelated to the true market price of their produce. However, the peasants, knowing that would not personally benefit from the increased agricultural output, had little incentive to go along. Many viewed collectivization as a “second serfdom”, particularly since they were forced into the collective farms against their will, and did not have the right to leave and seek employment elsewhere without the authorities’ permission – permission that was often denied.

At first, the peasants protested peacefully, writing letters to the authorities, but when they were ignored, violence broke out, with some villagers lynching the local enforcers of collectivization. Others turned to sabotage, including the burning of crops or slaughtering the livestock that was about to get seized from them and handed over to the collective farms. Stalin responded to the peasantry’s defiance with typical brutality and deployed the machinery of the Soviet state to crush and bring them to heel – especially the prosperous kulaks, who were deemed to be the most intransigent opponents of collectivization.

In 1932, the chaos and turmoil of collectivization resulted in a Ukrainian grain harvest whose yields were significantly below average: Soviet authorities got a hold of only 4.3 million tons, as opposed to 7.2 million tons a year earlier. Food rations were drastically cut in the cities, where many starved that winter. The famine had begun, and it was about to get far, far, worse. To channel the urban industrial workers’ ire away from Stalin’s government, a propaganda campaign was whipped up, blaming the food shortages on counterrevolutionary peasants. Agitprop movies and news articles accused the peasants of hiding the harvested grain and potatoes in order to produce an artificial shortage, then cash in on the higher prices, even if it cost the lives of starving urban workers.

The propaganda campaign succeeded in riling up the industrial workers, and before long, the urban proletariat was hopping mad at the peasants, blaming them for their hunger pangs. When the authorities organized them into special brigades and columns to go into the countryside to help confiscate grain, the workers were in no mood to listen to the peasants’ protestations of poor harvests and the lack of grain to meet the set quotas.

By early 1933, the Great Famine was in full swing, and thousands – most of them peasants in the countryside – were dropping dead every day, collapsing from starvation and its attendant consequences. However, the steadily growing catastrophe did not bring a halt to the forced collectivization, nor to the forced confiscation of grain and foodstuffs from peasants who had little to no surplus to spare. As news leaked of what was going on, Soviet authorities denied the catastrophe’s existence, labeled it fake news, and refused humanitarian assistance from the International Red Cross and other NGOs.

An information clampdown was ordered, and the Ukraine and southern Russia – the regions most impacted by the famine – were put under lockdown. Travel to and from the famine zones was restricted, trapping and condemning to death millions who might have survived had then been allowed to leave for parts of the USSR where food was more available. However, Stalin and his henchmen preferred the deaths of millions to the propaganda black eye that would result if so many eyewitnesses were allowed to spread their knowledge of the catastrophe taking place in the “workers’ paradise”.

The famine reached its peak in June of 1933, when an estimated 28,000 died of starvation each day – nearly 1200 every hour, or 20 every minute. Millions died of straightforward starvation, as their hungry bodies first consumed their fat reserves, then their muscles, before their lives were extinguished. Others fell to illnesses that their malnourished bodies were unable to resist. Yet more succumbed to waves of epidemic, such as typhus, that swept the Ukraine and southern Russia during the Great Famine. The final death toll is unknowable, but in the Ukraine, the tally ranges from a low of 3 million according to conservative modern estimates, to a high of ten million.

Today, the Great Famine is a bone of contention between the Ukraine and Russia. Kiev demands that the disaster be recognized as a deliberate genocide against the Ukrainian people, contending that industrialization was implemented despite the knowledge that it would lead to famine, and that Stalin had used famine as a weapon against the peasants. Moscow denies that the famine had been artificial, and contends that several other Soviet republics had endured starvation as well.

Depending on how one goes about defining “genocide”, a credible argument could be made for either position. Either way, however, there is no doubt that Stalin’s industrialization and forced collectivization policies set the stage for the Great Famine. Also undisputed is that Soviet actions after the catastrophe began, from confiscating foodstuffs from peasants who hardly had enough to feed themselves, to turning down international humanitarian aid, to preventing people in the starving regions from leaving, made things far worse.

Redd, Wyatt – The Holodomor: Stalin’s Genocidal Famine that Starved Millions in the 1930s (2017)