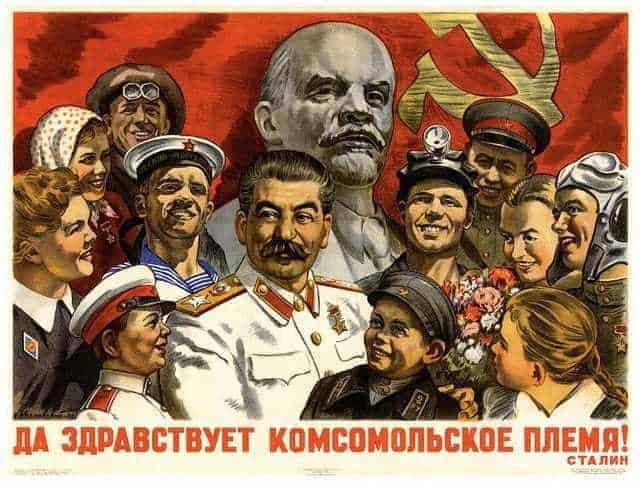 Joseph Stalin’s rise to prominence began soon after the 1917 Russian Revolution. Although it was under the leadership of Lenin that the Soviet Union experienced its first wave of cultural, social, and political changes brought on by the revolution’s aftermath, Stalin was continuously working behind the scenes (and sometimes in front of them) casting his influence where he could. He was at the forefront of changes happening in Russia and worked alongside Lenin and Trotsky as one of the seven members of the first Politburo, established in 1917 with the purpose of managing the Bolshevik Revolution.

By 1918, Stalin harnessed a great deal of persuasion over the Russian military. He used it carry out assassinations of counter-revolutionaries in order to protect Lenin and the Bolshevik cause. In 1924, following Lenin’s death, he successfully consolidated power. Ideas about Stalin and Lenin’s relationship became a useful tool of persuasion. Stalin was successfully able to cast himself as an extension of Lenin and his legacy.

In doing so, every idea, gesture, and statement Stalin made were implied to have at least in part come from Lenin, whose leadership Stalin characterized as “flawless.” The blending of identities endowed Stalin with capabilities similar to those granted to Roman Emperor Augustus.

In 12 BC, the Roman emperor Augustus was made Pontifex Maximus, a merging of the highest religious and highest political rank bestowed Augustus with immeasurable influence and power. Similarly, with the ghost of Lenin’s legacy, Stalin armed himself with a crown of absolute power and an inability to be wrong. It was the first of many phases of metamorphosis that the persona of Stalin would undergo before becoming Russia’s most loved and abominable cult figure.

During Stalin’s reign, the press played a vital role in projecting his image. They began referring to him as the Father of Nations, while labeling him a “genius”, “beloved”, “wise”, and “inspirational”. The press particularly liked to feature Stalin as a father figure, playing with children. It was a favored propaganda theme because it easily conjured a connection with the mass public that Stalin was a fearless and strong, but sensitive leader. Soviet propagandists purposely utilized elements associated with outside powers of influence to dissuade, manipulate, and weaken their base of loyalty.

Superimposing the word “Father” onto Stalin was meant to undermine Russia’s priests, also called “Father” and to suggest the church and Stalin were one in the same. Stalin’s cult of personality operated under the guise of convergence: every event, every celebration, every tradition and every holiday was infused with something recognizable from the past along with Stalin’s image. The desired result was always to hold Stalin up and repress everything else.

For a short while, the press engaged in another tactic. Honing in on his universal qualities, they tried to demonstrate a connection between him and the common Russian citizen. After the Second World War, this lessened. Stalin took a giant step back from center stage and information and messages from Stalin became minimal in their format: a telegram, a paper receipt, a candid photograph were offered to the public.

Although Stalin was portrayed as one of the “everyday people,” he and the organizers of his administration were engaged in the “Great Purge”. From 1934-1939 the colossal campaign raged inside the country. Its primary purpose was to repress groups that were considered a threat to Stalin’s leadership. This included any figure or groups that might be critical of the way Stalin led Russia. Many academics, along with opposition political parties, were classified (with a Bolshevik-sounding label) “enemies of the working class.” Millions were executed, exiled, or imprisoned.

An additional cult of personality tactic was generated by artists. Musicians, poets, writers, and painters were encouraged to show their admiration for Stalin. Statues of him began popping up all over Russia. One statue sat him side-by-side with Tsar Alexander III, although Stalin was not a towering figure, standing around 5’5″ tall. Throughout the 1930s, private homes installed “Stalin rooms,” spaces dedicated to the leader where his image hung. The cult of personality encouraged villages, town, and cities rename themselves as an homage to Stalin.

Not surprisingly, distortion of reality reached a sociopathic state, and the decision was made to rewrite historic events. Namely, the 1917 Revolution was rewritten in order to embellish the role Stalin played. In the new version, Stalin took Lenin’s place as second in command. Making decisions to alter the past required more than rewriting history. To conceal the truth, the Stalin cult-making machine faced the daunting task of ridding its expansive empire of the evidence that told the truth.

In reality, this task generated a society shrouded in tense fear. Widespread censorship, investigations, imprisonment, spying, and general mistrust were primary results of the campaign. Stalin’s desire to sweep the empire from its roots made every person a suspect of sabotage. Anyone with a memory of what happened the day before was forced to feign another truth. Every now and again, a film or book would slip through the censorship council. Russian artists learned to adopt covert ways of expressing the reality of the nation were living in without pointing at it directly. The schizophrenic state of Stalin cast a cold, dark shadow over Soviet society until his death in 1953.