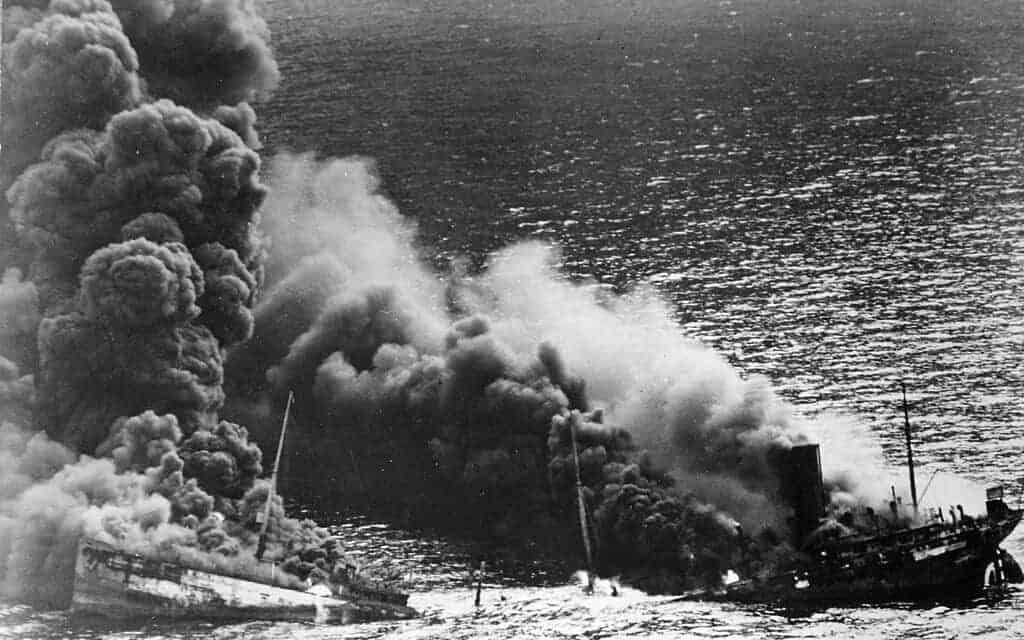 17. The Second Happy Time began with American entry into the war

Before the declaration of war between the United States and Germany, American destroyers had fired on several U-boats. One, USS Reuben James, had been sunk by the Germans. The United States Coast Guard had also destroyed a German weather station in Greenland. When a declaration of war formalized what was already a fact of life in the Atlantic, Doenitz deployed his long-range U-boats on the American East Coast. U-boats were off American shores by the second week of 1942. There they discovered that the US did not employ a coastal blackout at night. They also found few destroyers prowling the American coastal waters.

Ships moving along the coast were silhouetted against the lights of the shoreline, creating perfect targets for the German skippers, many of them experienced by more than two years of war. The first wave of U-boats remained on the American coastline for three weeks before returning to France. By February 6, when the last boat departed for home, 156,000 tons of American shipping had gone to the bottom. Many of the sinkings were seen from the shore. The U-boats left having been unhindered by the American Navy. It was the beginning of what the Germans called the Second Happy Time, and a worse disaster for the United States than Pearl Harbor had been.

18. The US Navy did not have the ships to convoy along the American coast

Admiral Ernest King, in command of the United States Navy, lacked the ships necessary to convoy merchantmen along American shores. He needed those he did have to escort lend-lease convoys to Britain and Murmansk, and especially troopships. From January until August 1942 the German U-boats often had a free hand off American shores, in the Caribbean, and in the Gulf of Mexico. Several Gulf ports were effectively blockaded by U-boats. The situation worsened as the spring dragged into summer. By August, 609 ships were sunk by the Germans, a total of 3.1 million tons of shipping.

Most of the casualties were the result of the carnage at sea during America’s first eight months of the European war were civilians. They were the crews of the merchant ships and tankers that went with their ships to the bottom. American air reconnaissance was ineffective. So were air defenses. The British looked at the sinkings with alarm, and made several recommendations on how they could be reduced, based on their own bitter experience. They were mostly ignored. Not all of the ships destroyed in American waters were US-flagged vessels, but the majority were.

19. The US Coast Guard would not allow ships to sail singly

Coast Guard Rear Admiral Adolphus Andrews commanded the area from Maine to North Carolina. In April, in response to the massive losses and his own shortage of vessels to protect shipping, he restricted movement to daylight hours. He also restricted ships from moving alone, and established convoys which worked up and down the coast. They moved from one protected anchorage to another, paused for the night, and proceeded the following day. The preceding month, March 1942, the Royal Navy transferred several escort vessels to the waters off the United States. They also established a Naval Air Station in Rhode Island, which was transferred later in the year to Trinidad.

American naval officers viewed British protection as humiliating and blamed Roosevelt for having given away the large contingent of destroyers earlier in the war. His supporters argued that the destroyers were obsolete as anti-submarine weapons. By August, increased patrols by the British and American Navies and the US Coast Guard reduced the number of lost ships and inflicted casualties on the U-boats. US and British shipbuilding began to produce more ships than were lost by the end of 1942, and improved sonar and anti-submarine warfare capabilities reduced German effectiveness.

20. Doenitz returned to concentrating on the mid-Atlantic sea lanes

In late summer, 1942, the German U-boats returned to operations in the open oceans, withdrawing from the American coast. In Germany, naval construction on all surface ships was halted, and all was concentrated on the U-boat fleet. Heavy guns for German capital ships began to loom on beach fortifications, Hitler’s Atlantic Wall. In autumn, U-boat losses began to mount, while the number of Allied ships lost to the wolfpacks continued to be dangerously high. New weapons, including the British-developed Hedgehog, joined the fight.

Depth charges were dropped from the stern of escort ships, or ejected by launchers to the side and behind. Hedgehogs were launched ahead of the ship, thrown forward, into the asdic beam projected by the vessel. In action, they proved far more effective than depth charges. Radar-equipped aircraft, also developed by the British, allowed long-range airplanes to detect and harass submarines while they vectored in surface ships to destroy them. They also were equipped with effective weapons against U-boats. As 1943 began the Allies started to gain the upper hand in the Battle of the Atlantic.

21. Codebreakers contributed to the Allied effectiveness throughout much of the battle

The story of the Polish and British cracking of the German codes processed through Enigma machines is far too extensive for inclusion here. What is pertinent is the German Navy’s use of an Enigma-based code called TRITON beginning in 1942. USS TRITON used the four-wheel version of the Enigma system. The change to TRITON temporarily left the British codebreakers in the dark. In late October, 1942, a German U-boat was attacked by HMS Petard in the Mediterranean. In company with other British destroyers, Petard forced the U-boat to the surface, and its crew abandoned the ship near Port Said. A team from Petard boarded the sinking submarine.

A complete four-wheel Enigma machine and some TRITON code books and documents were left behind by the Germans. The British were able to capture the code books and return them to Petard. The submarine sank quickly, taking the Enigma and two British seamen who attempted to extract it to the bottom. With the information recovered by Petard, the British were able to crack the remainder of the TRITON code, and were made aware of the operations controlled by Doenitz. It allowed the British and Americans to be ready and waiting when the U-boats made an appearance.

22. The code breakers were blinded again in early 1943

In early 1943, the number of U-boats operating in the Atlantic again threatened to overwhelm the convoy escorts, in part because the Germans made changes to TRITON. For over a week, the British codebreakers at Bletchley Park had no information about Doenitz’s plans. In March, 1943, over 475,000 tons of Allied shipping went down in the Atlantic, in 82 ships. In the Indian Ocean, the Caribbean, and the Pacific, another 38 ships were lost to U-boats. The Allies destroyed 12 German submarines in return.

The following month the tide turned against the Germans. U-boat losses mounted. Through April the Germans sank 39 Allied ships, totaling 235,000 tons. But many more ships got through, resupplying the nearly desperate British. 15 U-boats were lost as the Allies refined their tactics using newly developed weapons. The American shipbuilding program produced more and more destroyer escorts and destroyers, as well as long-range bombers and flying boats. Escort carriers surrounded by a task force developed specifically for anti-submarine warfare actively hunted the Germans.

23. Black May broke the back of the German U-boat fleet

May, 1943, was the month in which the Allied Navies effectively defeated the U-boat threat. At the end of April and through the first week of May, a slow convoy of 43 ships and seven escorts was attacked by more than 30 U-boats. The allies lost 13 ships to the U-boat attacks which continued for week, but most of the attacks were unsuccessful. The combination of aerial observation and attack, depth charges, hedgehogs, and surface gunfire proved deadly for the Germans. The 13 ships sunk (63,000 tons) cost Doenitz 6 U-boats, with another 7 returned to port too damaged to rejoin the fight for some time.

During the month of May, in all actions, 43 U-boats were destroyed, 34 of them in the Atlantic. The same number of Allied ships were lost in the Atlantic, 34 ships. It was a loss of 135,000 tons, but it cost the Germans a full quarter of the available U-boat fleet. Doenitz withdrew his remaining boats from the North Atlantic, accepting defeat. German U-boat activity continued through the remainder of the war, but the concerted effort to defeat Great Britain by choking off its supplies was over. The Allies did not yet know it, but they had won the Battle of the Atlantic.

24. The U-boats were driven out of the South Atlantic the same year

The defense of the convoys in the South Atlantic was coordinated by the United States Navy and the small but effective Brazilian Navy and Air Force. The Brazilians escorted more than 600 convoys during the war, with a loss rate of 0.1%. More than 16,000,000 tons of supplies and equipment reached their destination safely under Brazilian escort, though submarine attacks by the Germans and Italians were common. American and Brazilian long-range aircraft, mostly B-24 Liberators, attacked enemy U-boats and reported their positions to surface ships which drove them off or destroyed them.

The Italians and the Germans both lost submarines in the waters patrolled by the Brazilians, who had entered the war partly in response to U-boats’ sinking ships off their coast. Between January and September 1943, German U-boats were sunk at a rate of more than one per month in Brazilian waters. For the Germans, they were irreplaceable by that stage of the war. The Allied bombing of German industries made construction of newer and more effective submarines difficult. In September, 1943, Doenitz launched a final attempt to defeat the Allies in the North Atlantic with U-boats. They sank 14 Allied ships (six of them warships) at a cost of 39 U-boats.

25. The costs of the Battle of the Atlantic were staggering

German U-boat activity continued through the end of the war, but the Battle of the Atlantic was won by January, 1944. When the war ended and the remainder of the U-boat fleet surrendered, the total was added up. 783 U-boats were destroyed (or captured) and 30,000 German sailors killed, 75% of the total U-boat fleet personnel. Germany also lost 4 battleships, 9 cruisers, and more than two dozen destroyers. The Germans sank 175 Allied warships. The damage inflicted on the Allies’ merchant fleets was brutal. Over 6,000 Allied freighters and tankers were lost. They took with them the lives of more than 72,000 seamen. Over 36,000 of them were civilian merchant seamen from all over the world.

Had the Allies not prevailed in the Battle of the Atlantic, the great buildup of arms and men in Great Britain for Operation Overlord could not have been achieved. The total losses in terms of tonnage was over 21 million tons, all of it sent to the bottom of the ocean, where most of it remains. The ships were replaced by over 38 million tons of new shipping, most of which was built in the United States, at enormous costs. Though historians dispute how close Germany came to winning the Battle of the Atlantic, there is little dispute over its cost in lives and materiel for all of the contending nations.

“Battle of the Atlantic”. Bernard Ireland. 2003

“The Battle of the Atlantic”. Donald Macintyre. 1961

“Escort: The Battle of the Atlantic”. D. A. Rayner.

“The Real Cruel Sea: The Merchant Navy in the Battle of the Atlantic”. Richard Woodman. 2004

“U-boat Assault on America: Why the US was Unprepared for War in the Atlantic”. Ken Brown, US Naval Institute.

“The Defeat of the German U-boats: The Battle of the Atlantic”. David Syrett. 1994

“The Battle of the Atlantic”. Samuel Eliot Morison. 1947