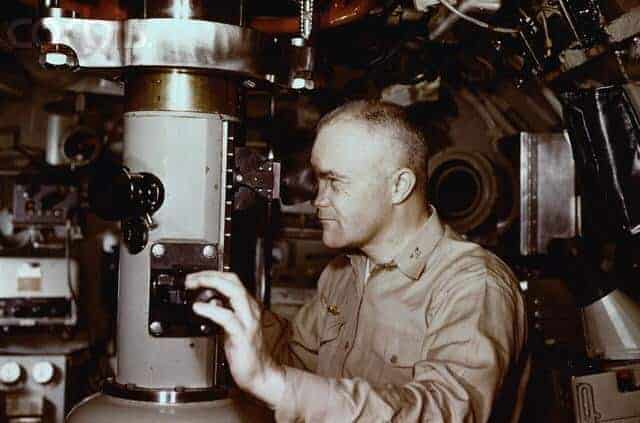 A ship conducts a shakedown cruise after its construction is complete, or after a lengthy period of refit and repair in a shipyard. USS Triton used its shakedown cruise for another purpose entirely. America’s then newest nuclear submarine steamed around the world, remaining submerged for the entire cruise. It followed, as closely as possible, the route followed by Magellan’s ships during the first around the world voyage in the 16th century. Triton’s achievement was more than a propaganda victory, displaying America’s superiority in the use of nuclear power. It was a clear demonstration American submarines could go anywhere on earth where the water was deep enough to accommodate them.

Triton was commanded on its epic first voyage by Captain Edward L. Beach Jr. Beach was a World War II veteran (12 war patrols), a published author, and a former Naval Aide to President Eisenhower. His book Run Silent Run Deep had been made into a popular motion picture starring Clark Gable and Burt Lancaster two years earlier. Beach took command of Triton after completing nuclear power training, and was actively involved in preparing the boat – the Navy has long called submarines boats – for its epic first voyage. The crew was not informed of the magnitude of their boat’s first voyage. Not until they were underway and submerged did the crew of Triton learn they had embarked on a voyage unlike any other in history. Here is its story.

1. The voyage was an opportunity to observe the psychological impact of long submergence

In 1960 the United States Navy was preparing to launch the first Polaris submerged ballistic missile submarine deterrence patrols. Polaris submarines were designed to remain at sea, submerged, for ten weeks or more. Data on the psychological impact of such deployment was scarce; Triton’s long voyage would add to the bed of knowledge on the subject. Accordingly, Dr. Benjamin Weybrew joined the ship as a supernumerary, to interview and test volunteers among the crew over the course of the voyage. Other supernumeraries included photographer (and Naval Reserve Officer) Joseph Roberts. Roberts would record the voyage for National Geographic Magazine.

Triton provided the test bed for a new form of underwater navigation, the Ships Inertial Navigation System (SINS). Up to the development of SINS ships, including submarines, used the centuries-old means of sighting celestial bodies to determine their position and navigate to their destination. Triton had a periscope with a sextant built in for that very purpose. SINS was a critical component of the Polaris missile system, and during the voyage of Triton the system would be tested by comparing its data to that obtained through the use of observations via the sextant. As these preparations – and many others – were completed the crew of Triton remained in the dark about the upcoming voyage.