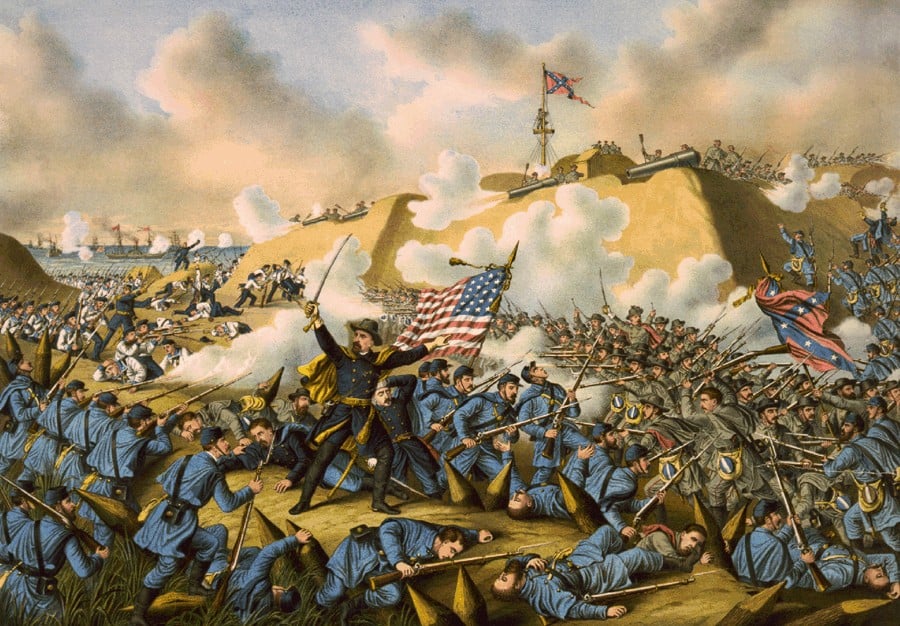 24. Banshee was a regular on the Nassau to Wilmington run in 1863

Banshee made eight successful voyages between Wilmington and Nassau in 1863, delivering cotton to its owner’s agents, and weapons and other war supplies to the Confederate port. Like all blockade runners, it often lurked along the inlets of the American coastline while waiting for conditions to be ideal for the final run into the Cape Fear River. On November 21, the ship was captured while so occupied, its British captain and crew of 38 were sent to New York for incarceration after a Confederate flag was found aboard. That and the ship’s log made its true identity suspicious. Banshee was later taken into the US Navy.

The situation over the crew of the Banshee was adjudicated by military commission. It was found that all were foreign citizens and it recommended the crew be released. When they were, they were given two weeks to leave the United States. Secretary of the Navy Gideon Welles signed the release, though the name of Captain Steele did not appear on the official document. Steele’s fate was lost to history. Banshee made its owner, a Liverpool cotton merchant, so much money in just eight voyages that he built another steamer to replace it, named Banshee II. It also proved profitable.

25. The blockade runners prolonged the war and its carnage

The south lacked the basic materials to make war against the United States, as well as the ability to manufacture them in 1861. Before hostilities began ships arrived to supply them, and they continued to supply the Confederate states up to the final days of the war. Some blockade runners were motivated simply by profit. Others had more patriotic motivations, at least on the Southern side. The American National Archives contains vast files of the papers kept by the companies created to trade between Great Britain and the Confederate States of America, and the ships involved in suppressing them. The records document more than 3,000 attempts to run the blockade, and a success rate of nearly 80%.

Without the efforts of the blockade runners, the war would have been considerably shorter. The South simply did not produce the materials to support its armies in the field. The story of the blockade runners is a little studied aspect of the American Civil War and the British involvement in it, though the British government never officially recognized the Confederacy as an independent nation. Some men made large fortunes selling the materials of war during a conflict in which hundreds of thousands died. It’s a story worth knowing.

“The Narrative of a Blockade Runner”. John Wilkinson. 1877

“Lifeline of the Confederacy: Blockade Running during the Civil War”. Stephen R. Wise. 1989

“The Bahamas and Blockade Running During the American Civil War”. Thelma P. Peters. 1939

“Masters of the Shoals: Tales of the Cape Fear Pilots Who Ran the Union Blockade”. Jim McNeil. 2003

“The Cruise of the Alabama and the Sumter”. Raphael Semmes. 1864

“Memoirs of service afloat during the war between the States”. Raphael Semmes. 1869

“The Introduction of the Ironclad Warship”. James Phinney Baxter. 1968

“Through the Blockade: The Profitability and Extent of Cotton Smuggling, 1861-1865. Stanley Lebergott, Journal of Economic History. December, 1981. Online

“Union in Peril: The Crisis Over British Intervention in the Civil War”. Howard Jones. 1992