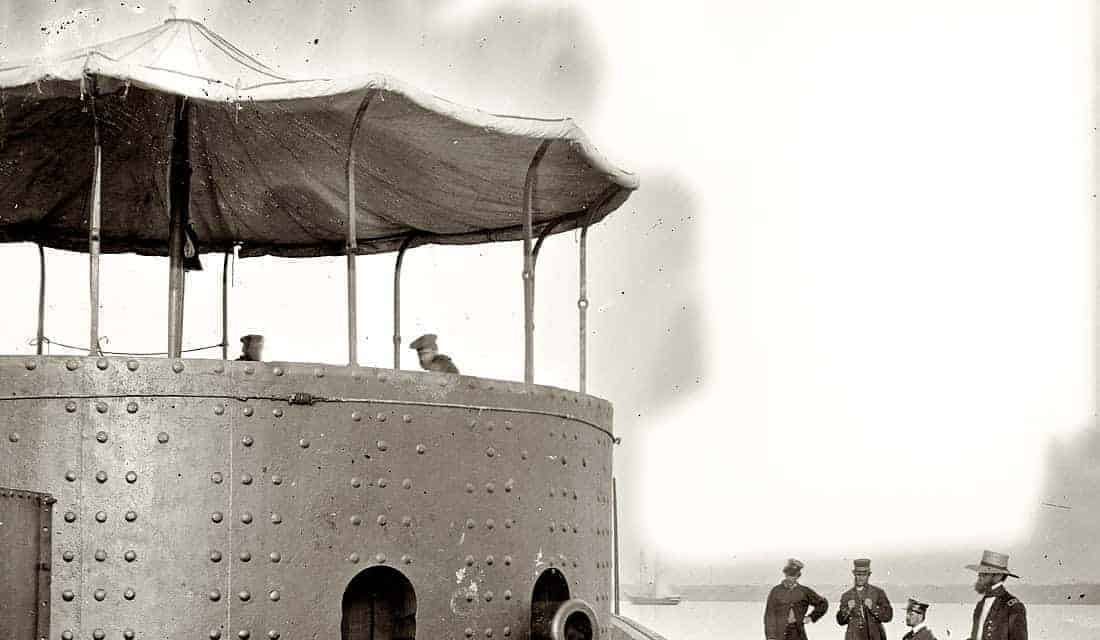 The C.S.S. Virginia had seemed to tilt the balance in favor of the south. That was until the introduction of the U.S.S. Monitor, in 1861 with its revolutionary revolving turret.

After its battle with the C.S.S. Virginia, the Monitor patrolled the James River in support of McClellan’s peninsular campaign. By 1862 the Monitor was no longer needed in Virginia and she was stationed off the coast of North Carolina. The Monitor was to lead an attack on the port of Charleston, South Carolina. The Monitor was very effective in coastal waters but was not able to cope with the open seas, especially in stormy weather. The Monitor was too slow and heavy and it sat very low in the water and this made operating in the open sea problematic. The ironclad had to be towed by a frigate out at the sea. On this day in 1862, the U.S.S. Rhode Island was towing the Monitor around Cape Hatteras in heavy winter weather. The waters around the Cape are notorious, especially in December. The ironclad as it was being towed began to let in water and soon was flooded. The desperate crew tried to use pumps to save the ship from becoming totally flooded.

As the Monitor rolled in the rough seas, more leaks appeared and the by the evening of December the 30th the ironclad was in deep trouble. The officers and the crew refused to abandon the ships. They did alert the U.S.S. Rhode Island that the ship was filling up with water by means of a lantern. However, soon it was apparent that the Monitor was doomed and the commander J.P. Bankhead ordered that the crew should abandon the vessels. The Rhode Island managed to pull close to the Monitor and was able to launch two lifeboats. They were able to rescue many of the crew but some of the Monitor’s crew refused to risk their lives on the flimsy lifeboats in the stormy seas. The lifeboats rescued some 40 men and officers. However, sixteen crew members were left on the ironclad and before they could be rescued the Monitor’s pumps stopped working and it sank. The remaining sixteen officers and crew all drowned. The Monitor had only a brief career but it changed naval warfare. The wreckage of the ironclad was investigated by divers in the early 2000s.