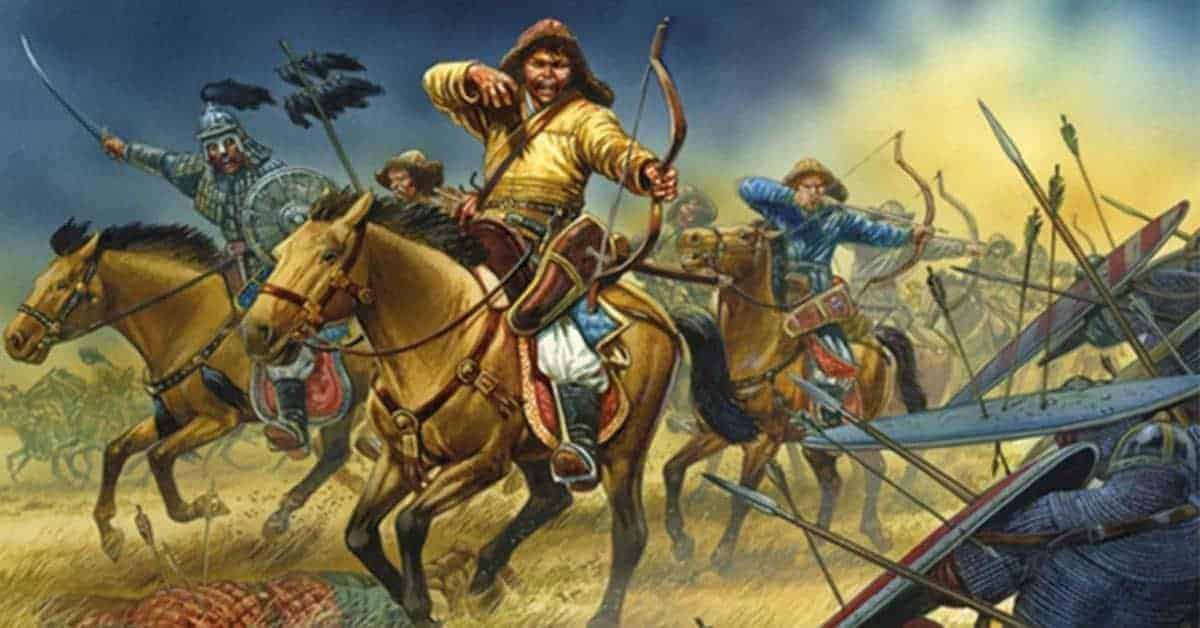 Ogedei (1185 – 1241) was Genghis Khan’s third son and unexpected successor. His two older brothers, Jochi and Chagatai, were ahead of him in the line of succession but had developed a bitter enmity. Jochi claimed the right to inherit as eldest, but Chagatai countered that Jochi, whose parentage was questionable because their mother had been kidnapped by an enemy of Genghis in the year before Jochi’s birth, was a bastard, making Chagatai the eldest trueborn son. When it became clear that the empire would descend into civil war if either inherited, Ogedei was selected as a compromise heir.

Realizing that he was not Genghis’ military equal, Ogedei was open to wise counsel and, relying on capable subordinates, greatly expanded the frontiers of the Mongol Empire to its greatest southward and westward extents. From his capital in Mongolia, he directed simultaneous campaigns on multiple fronts separated by thousands of miles, relying on field generals acting independently within their theaters, but subject to Ogedei’s orders, relayed via a swift horse relay courier network.

In the east, the Mongols continued the campaign against the Jin, in alliance with the Song Dynasty in southern China. Ogedei commanded in person until 1232, then returned to Mongolia, entrusting to subordinates the final mopping-up operations, which terminated with the extinguishment of the Jin Dynasty in 1234. The Mongols then fell out with their Song allies, and a new campaign began against southern China. Simultaneously, Ogedei’s Mongols invaded the Korean Peninsula and asserted Mongol suzerainty.

In the south, Ogedei’s armies invaded India, marching into the Indus Valley and on to the Delhi Sultanate, occupying parts of today’s Pakistan and Punjab. Simultaneously, another Mongol army marched into and subdued Kashmir.

In the west, Ogedei’s armies marched out of the recently conquered Khwarezm to subdue the remainder of today’s Central Asia, overrunning Khorasan, Afghanistan, Persia, and reaching Mesopotamia. From there, they turned northward and conquered Armenia, Georgia, and the Caucasus region then continued to reduce Russia to centuries of vassalage. Afterward, they penetrated into Eastern Europe, capturing Poland, Bulgaria, Hungary, and reaching the Adriatic Sea. The Mongol forces in Europe under Subutai were drawing plans to continue the advance into Italy and Central Europe, when news arrived of Ogedei’s death, which necessitated a halt to the campaign and a return to Mongolia for the selection of a new Khan.

Batu (1207 – 1255) was a grandson of Genghis who accompanied and, as a member of the Mongol royal family, was in nominal command of, Subatai’s campaign that conquered Russia and penetrated Europe to the Adriatic Sea and the walls of Vienna. He went on to found the Golden Horde – an independent Mongol state on the western Steppe that dominated Russia and the Caucasus for two and a half centuries, and that included at its peak most of Eastern Europe, with a territory extending from the Danube to Siberia.

Batu’s father, Jochi, had been entrusted by Genghis Khan to administer the Mongolian Empire’s west, comprised during Genghis’ days of Central Asia and Siberia. After Jochi’s death in 1227, the task fell to Batu. In 1237, with Subutai as his military commander, Batu initiated the Mongol conquest of Russia, which was completed by 1241. The Mongols then launched a multi-pronged invasion of Eastern Europe, with one army in Poland defeating a coalition of Germans and Poles, while another Mongol army defeated a larger Hungarian force hundreds of miles to the south.

Batu and Subutai then crossed the Carpathians and concentrated in Hungary for a campaign against Central and Western Europe, when news arrived of the Great Khan Ogedei’s death. Subutai wanted to continue, but Batu had ambitions of becoming the next Great Khan and, as a member of the royal family, outranked Subutai. He insisted that all return to Mongolia to participate in the selection of the new Mongol ruler, and thus, in 1242, with all of Europe within their reach and at their mercy, the Mongols decamped from Hungary and rode back to Mongolia.

Batu failed in his bid to get selected the next Great Khan and returned to administer his own domain from his new capital, Sarai, on the Volga. In 1251, the Great Khan in Mongolia recognized the independence and complete autonomy of Batu’s domain, which was known thereafter as the Golden Horde. It lasted into the 16th century before breaking up, with the last fragment surviving until 1847.

Hulagu (1217 – 1265) was a grandson of Genghis Khan and younger brother of the Grand Khans Mongke and Kublai, who expanded the Mongol domain into Western Asia with a savagery that remains in the region’s memory to this day. He destroyed Baghdad and extinguished the Abbasid Caliphate, conquered Syria, menaced Egypt and the surviving Crusader states, and while destroying medieval Persian culture, founded the Ilkhanate in Persia, a precursor of modern Iran.

In 1251, Hulagu was recognized by his brother Mongke as ruler of the Ilkhanate in Persia and tasked to extend Mongol power into the Islamic world. As a preliminary, Hulagu attacked and exterminated the Assassins cult, a militant Islamic sect that had terrorized the Middle East for generations. He then turned to the Abbasid Caliphate, and when the Caliph refused to submit, Hulagu invaded and besieged him in Baghdad, captured the city in 1258 and destroyed it along with all its treasures, such as the Grand Library of Baghdad, and massacred between 200,000 to a million inhabitants. To avoid a Mongol taboo against spilling royal blood, the captured Caliph was executed by being rolled into a carpet, which was then trampled by Mongols riding over it. That ended the Abbasids and the Islamic institution of the Caliphate.

Hulagu then conquered Syria, bringing to an end the Ayubbid dynasty founded by Saladin. He then set his eyes on Egypt, but on the eve of the invasion, he received word that his brother Mongke had died. As a potential successor, Hulagu returned to Mongolia, and in his absence, the Mongols he left behind under a trusted subordinate were wiped out by the Egyptian Mamluks at the Battle of Ain Jalut in 1260 – the first major defeat of a Mongol army, and one that broke the spell of Mongol invincibility.

Hulagu was not selected to succeed his brother as Great Khan, so he returned west to avenge the defeat at Ain Jalut, but ended up warring with a cousin, Batu Khan’s brother Berke, who had succeeded to the leadership of the Golden Horde, converted to Islam, and was enraged by Hulagu’s rampage in the Muslim world. The war with Berke was Hulagu’s main focus for the remainder of his life, until his death in 1265.

Kublai Khan (1215 – 1294) was a grandson of Genghis Khan and brother of the Great Khan, Mongke, whom he succeeded in 1260. He conquered the Song Dynasty of southern China and founded the Yuan Dynasty, thus reuniting China for the first time in centuries. He was the nominal overlord of all other Mongol domains, from the Pacific to the Carpathians, but his writ and attention were focused on the territory he personally ruled in China and its periphery, which was wealthier and more populous than all the remaining Mongol khanates put together.

Kublai heeded the advice that “one can conquer an empire on horseback, but cannot rule it on horseback“. After conquering the Song in a campaign that he largely led in person, he spent the bulk of his remaining years in governance rather than military affairs. He ordered expansions along the periphery of his domain that met with mixed success or ended in disaster such as two attempted invasions of Japan that were wrecked by typhoons, but domestic politics and governance interested him more than war.

His reign and founding of the Yuan Dynasty marked the transition that successful nomadic conquerors eventually underwent, eschewing the roughneck ways of the Steppe as they came to appreciate the benefits of settled life, and getting absorbed into the civilization which they had conquered. Kublai encountered fierce resistance from Mongol traditionalists who preferred the old ways and their felt tents to the courtly life in Chinese palaces, but he prevailed in the end.

Kublai’s conquest of the Song Dynasty reunified China after centuries of fragmentation, and the borders of the Yuan Dynasty, encompassing Manchuria, Tibet, and Mongolia, established the broad outline of Chinese territorial suzerainty that survives to this day.