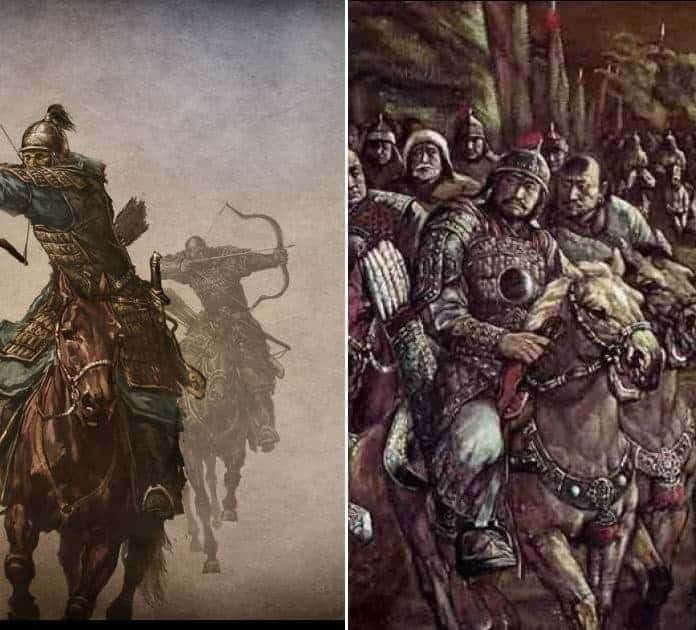 Until the late 1100s, the Mongols were an obscure nomadic tribe. Roaming the Eurasian Steppe north of China, various Mongol factions fought each other and neighboring tribes, as they had done for centuries. By the early 1200s, the Mongols had been united under the leadership of a charismatic and capable leader named Temujin. After conquering and absorbing neighboring tribes, and forming them into a Mongol nation, Temujin adopted the title Genghis Khan, or Universal Ruler, and set out to conquer the world.

By the time they ran out of steam, the Mongols had conquered history’s biggest contiguous land empire. It stretched from Korea and the Sea of Japan to the east, all the way to Hungary and the borders of Germany in the west, and from the frozen wastes of the Siberian tundra in the north, to the steaming jungles of Indochina in the south. During their conquests, the Mongols terrorized Eurasia and the known world to an unprecedented extent – unmatched before or since, and killed an estimated 40 million people. That 40 million figure was from a global population much smaller than today’s. If extrapolated to modern population, it would be the equivalent of over 300 million people – or more than four times the deaths of World War I and World War II, combined.

Following are twelve of the most fascinating things about the Mongols and their terrifying conquests.

The Mongols Had Immense Military Potential, and Only Needed the Right Leader

For thousands of years, Eurasian Steppe nomads preyed opportunistically on their settled neighbors. Nomadic war bands often raided to seize booty, but when nomadic tribes were united under strong leadership, those raids could grow into devastating attacks that destroyed empires. Growing up and almost living on horseback, the nomads had a strategic mobility that allowed them to raid settled lands, loot, and leave before the locals could mobilize a response. That mobility also allowed the nomads to choose when, where, and whether to fight the forces sent to chastise them.

Strategic mobility was supplemented by tactical advantages. First, their horses gave them battlefield mobility. If their civilized opponents managed to bring them to battle, it was still difficult to make it a decisive battle. Unlike armies comprised in the main of infantry, if things went wrong for nomadic mounted armies, they were seldom forced to surrender or fight to the death. Unless constricted by some natural obstacle or other rare situation, the nomads usually had a third option: ride off the battlefield, and live to fight another day.

Another advantage was that the Steppe nomads’ preferred weapon, the recurved bow, often had a greater killing range than the weapons wielded by their opponents of the settled lands. That created tactical mismatches, giving nomadic warriors a safe standoff from which to kill with relative impunity. They could thus subject less mobile enemies to a rain of arrows, winnow their ranks until they grew disordered and demoralized, then charge in to break them. A prime example is the 53 BC Battle of Carrhae. There, a 50,000 strong Roman army, comprised in the main of infantry, was annihilated by a 10,000 strong Parthian cavalry force comprised in the main of mounted archers armed with recurved bows.

Another advantage was the nomads themselves. Life on the harsh Steppe, much of it spent on horseback, created a deep pool of tough natural cavalry. Although the population of the civilized lands neighboring the Steppe vastly outnumbered that of the nomads, only a minority of the civilized lands’ population could be mobilized as warriors. That is because civilization rests upon a majority of civilians pursuing civil pursuits, such as working in the fields and workshops. Steppe nomads had few fields and less manufacture, and their food source, their grazing animals, could be tended to by children and women. Thus, almost the entire adult male population of fighting age were available as warriors.

Civilization only survived because, luckily, it was often difficult to unite the feuding and fractious nomads in large enough numbers to overwhelm their settled neighbors. Small scale nomadic raids on the borders of civilized lands were quite frequent, but leaders who could unite the nomads, and thus realize the Steppe’s terrifying potential, were rare. Nonetheless, such leaders did emerge from time to time, and when they did, the world trembled.