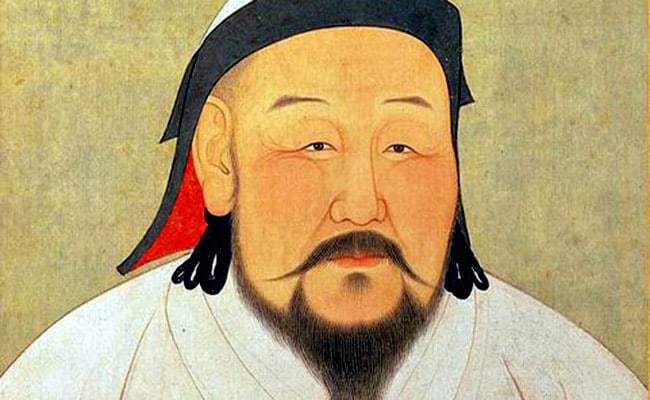 On this day in history, one of the most feared men in history died. Genghis Khan, the Mongol leader who conquered an empire from the Yellow Sea to the Aral Sea, dies in camp during a campaign against a central Asian kingdom. The great Khan, aged about 60 and in failing health, passed away in his tent. The year earlier he had been seriously injured after a fall from his horse and he has been in poor health ever since.

Genghis Khan, whose real name Temujin was born around 1162 on the Mongolian Steppe. His father, died when Temujin was in his early teens. Temujin succeeded him, but the tribe wanted a more experienced leader. Temujin’s family was left to fend for themselves in the wilderness of the Steppes without friends and allies. However, the future Genghis Khan was a fearsome individual and a natural born leader. Soon he had gained a reputation as a war-chief and had formed alliances with other tribes. His wife was kidnapped by a rival tribe and he went on to rescue his wife and to annihilate the kidnappers.

Such was his reputation that he drew many warriors to his side. He swelled his forces by offering the defeated either death or the choice of joining him. By 1206, Temujin was the leader of a great Mongol confederation and was titled the ‘Universal Ruler’ or Genghis Khan.

Khan developed a new law code and reorganized the army. He was eager to break down the old tribal units and to turn the Mongols into a unified nation. The Khan had many ambitions and he planned many conquests. He had one great advantage in that he and his men had a plentiful supply of horses. All of Khan’s warriors were mounted, and half of any given army was made up of armored troops. The Mongols were also brilliant archers. Genghis was also a great believer in the use of spies and intelligence sources. His favorite tactics was a lightning strike on an opponents ranks at their weakest point.

Genghis and his army were to prove spectacularly successful. He was able to make himself master of Central Asia and then attacked east into Northern China. He used brutal methods to terrify his opponents and even by the bloody standards of the time he was cruel.

On August 18, 1227, while putting down a revolt in the kingdom of Xi Xia, Genghis Khan died. His last words were that Xia Xia must be completely wiped off the face of the earth and his followers and subjects carried out his wishes. Today nothing is left of Xia Xia. Genghis’ heirs slaughtered anyone who set eyes on his funeral procession. The body of the great Khan was brought back to Karakorum, the capital of the Mongol empire. His body was buried at a location that was secret to all but to his family and friends. It is believed that he was buried near a sacred mountain in central Mongolia. Before he died many people were killed before he was laid to rest.

The Mongol empire continued to grow after Genghis Khan’s death and stretched from Russia to China. The descendants of Genghis Khan were to rule a huge area of Eurasia for up to two centuries.