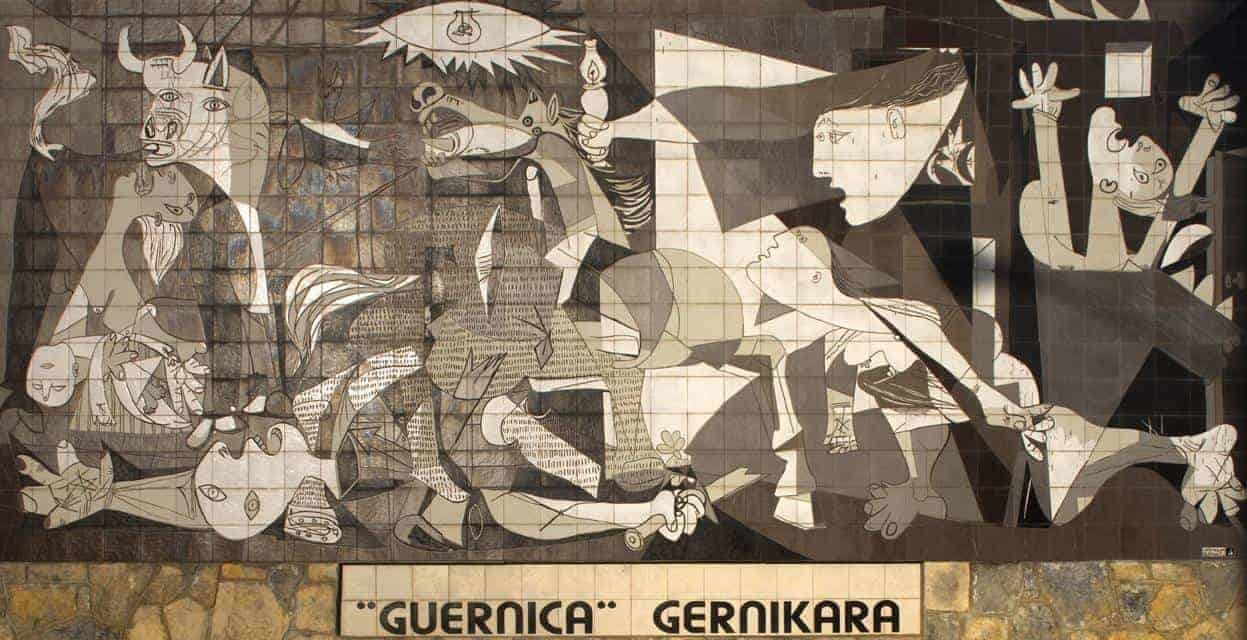 Ten Facts About The Bombing Of Guernica (1937)

The German air force unit that bombed the Basque town was popularly known as the Condor Legion. This was composed of volunteer pilots and ground crew and it came to number several hundred. They flew the latest German planes and these were possibly the best airplanes in the Spanish Civil War. The planes were mainly Junkers and they were mainly transport planes. They also had some Dorner DO 17 E1 that the Condor Legion employed in bombing raids. The main plane used by the Condor Legion was the Junkers JU 52 and this dropped many of the bombs that were used to devastating effect at Guernica. The Condor Legion also dropped incendiary bombs that caused terrible injuries to civilians. The Condor Legion was used by the Germans to test their aerial capabilities and their tactics. They used Spain as a testing ground for their latest planes and to perfect their ability to conduct bombing raids.

The raid took place on Monday the 26th of April. It was market day and many people from the countryside were visiting the town. Many farmers would have come to town to sell their produce. A large market would be held with people buying and selling goods, especially agricultural produce. As a result, the town of Guernica was particularly crowded and full of people. Some historians believe that the Germans deliberately targeted the city at this time in order to maximize the casualties. However, some have disputed that there was a market taking place at that time.

Many believe that the Luftwaffe deliberately targeted civilians. It was a strategy known as terror bombing, this strategy sought to break the will of the enemy to fight by ensuring that a fearful civilian population put pressure on their military and political representatives to stop the war and surrender. This doctrine was formulated in the 1930s and it was based on the assumption that such was the power of aerial warfare that it could force an enemy to surrender. The Luftwaffe officially rejected this doctrine but it proved to be very influential and it influenced the planners of the attack on Guernica. The German planners with the agreement of the Spanish Nationalists deliberately targeted Guernica on a busy market day in order to force the Basques to sue for a separate peace and abandon their allegiance to the left-wing government in Madrid. If this was the case then it was a failure, as the Basques did not renounce their allegiance to the Republican government. Indeed, the Basques continued to fight Franco and his forces until they were overcome by superior Nationalist forces. Indeed Basque nationalists continued the struggle with Franco even after the end of the Spanish Civil War. The terror bombings of Guernica proved counter-productive and only fortified the will of the Basques to continue fighting.

The commander of the Condor Legion and the man who planned and directed the terror raid on Guernica was Wolfram Freiherr von Richthofen (10 October 1895 – 12 July 1945). He took over command of the legion from his predecessor whom Berlin did not feel was aggressive enough. Richthofen was from a noble Prussian family and he had fought in WWI. His cousins, the brothers Lothar and Manfred von Richthofen both became flying aces and they encouraged him to join the German Imperial Air Service. Richthofen quickly became an ace and was decorated many times for his bravery in the skies. However, his ability as an ace was overshadowed by his cousin who was the infamous Red Baron, perhaps the most famous air ace of all time. He is credited with downing some 80 allied kills. After his cousin was killed Von Richtofen, flew until the end of the war. After the war ended, the German air force was disbanded and he returned to civilian life and he flew civilian plans. However, he was able to join the army. In 1933 when Hitler came to power one of his first actions was to re-form the German airforce. Richthofen was to join the new airforce and was rapidly promoted. Guernica did his career no harm and he was awarded decorations and medals by both Spain and France for his role in the Spanish Civil War. During WWII he became a Luftwaffe Field Marshal. He was to serve on the western and the eastern front and was in command of the Luftwaffe at the Battle of Kursk. The German defeat at this battle saw him removed from active service and his health began to deteriorate and he was regularly hospitalized. He was captured by the Americans in a hospital and he died in captivity soon after the end of the war in 1945.

6. Hitler Was Very Pleased With Richthofen for Guernica Massacre

Hitler was personally delighted with what had happened at Guernica. He saw it as a sign that Germany had a powerful air force and was the equal of the British, French, Russians and Americans. He saw the massacre of innocent men, women, and children as a great victory. He personally commends Richthofen on his great success. So impressed was the Fuhrer that he immediately drew up plans that would allow the Luftwaffe to repeat the ‘success’ at Guernica again. When WWII was declared Richthofen based upon his role in Guernica was promoted to a leading role in the invasion of Poland.

Hitler personally appointed him to take command of the Luftwaffe attacks on Warsaw. Here the Luftwaffe using the lessons they had learned at Guernica managed to destroy much of Warsaw. The devastation caused by the Luftwaffe was repeated in Warsaw but on a much greater scale. The German airforce was able to inflict tens of thousands of casualties, (mostly civilians) during their attacks on Warsaw. Hitler was once again very pleased with Richthofen.

7. The Casualties of Guernica Bombing

Until recently, the number of civilian casualties has been much debated. Because of the nature of the times, the left tried to use the horror at Guernica for propaganda purposes and they exaggerated the number of people killed and wounded. There were claims that many thousands had been killed during the raids on Basque Town. Modern research has led to the casualty figures for the raid being reduced and indicate that it was not as horrific as it first appeared. Modern research has concluded that the actual number of deaths and wounded at Guernica was much lower and between 200 and 300 people were killed in the bombing.

Until the modern time, it had been generally accepted that the number of deaths had been over 1,700, but these numbers are now known to have been exaggerated, by the government in Madrid. Historians now agree that the number of deaths was under 300. This means that the casualties inflicted on Guernica were much lower than in other cities attacked by the Luftwaffe during WWII, such as Warsaw and Rotterdam.

8. The Spanish Nationalists Blame the Republicans

There was a great deal of criticism of the raid around the world. Many democracies, in particular, were appalled by the fact that the Germans had apparently deliberately targeted innocent civilians. The Spanish Nationalists were privately very happy with the outcome of the raids. They believed that the deaths and the destruction at Guernica would force the Basques to surrender. In public, they tried to downplay the impact of the German air raids on the city. They asserted that the reports of civilian deaths and the destruction of the city were all communist lies. In fact, they tried to say that nothing had really happened. Indeed when evidence came to light that of the destruction of the city, the Spanish Nationalists tried to blame the Republicans. They stated that the retreating Republicans had destroyed the city of Guernica as part of a scorched earth policy and that they had ruined it and not the Condor Legion.

During Franco’s decades of rule, it was forbidden to report on what had happened at Guernica. In the official histories and in the newspapers there was no mention of the bombing of Guernica and this continued right until the death of the Spanish dictator in 1975.

9. Guernica Bombing was Trial Run & Training Ground For The Luftwaffe

The Royal Italian air force played a role in the destruction of Guernica. In Spain, the Italian pilots were under the direct command of the Spanish Nationalists and they cooperated with the Condor Legion. Mussolini sent to Spain 6,000 aviation personnel as well as about 720 aircraft, to help the Nationalist Spanish forces. However, in the attack on Guernica, the Italian air force only played a supporting role. Some Italian fighters and bombers joined the Condor Legion in one of the waves of attacks that destroyed Guernica. The Italian role at Guernica has often been forgotten but they are also partially responsible for the tragedy in Guernica and the deaths and maiming of so many.

However, the attack on Guernica can be seen as mainly a Luftwaffe operation and the German air force must shoulder the blame for the bulk of the terror. It was a Luftwaffe planned attack and directed by their commander Richthofen. Berlin was eager to conduct the raid. Goering saw the Spanish Civil War as a testing and training ground for the Luftwaffe. He is believed to have wanted a large-scale Luftwaffe operation to see if it had the capabilities to engage in carpet bombing.

Guernica quickly became a world-famous symbol of civilians caused by war. The Spanish Republican government commissioned work from Picasson, then the greatest living artist. They wanted him to paint a piece that would win the government the support of people around the world. Picasso was himself sympathetic to the left-wing government in Spain and he had publically condemned Franco. He was so outraged by what happened at Guernica that he painted what has come to be regarded as one of the greatest works of art of the twentieth century.

The painting Guernica is one of the most powerful symbols of the Spanish Civil War. A tapestry copy of the painting is at present hanging at the entrance of the Security Council Hall in the United Nations building in New York.

Medium – Internment, Torture, Executions: The Basque Country In The Dying Days Of The Franco Dictatorship

Historic UK – The Bombing Of Guernica: Could Ww2 Have Been Stopped That Day?

The Irish Times – ‘Guernica’: 80 Years On Still A Stark Reminder Of War’s Horror