21 Moving Images of the Warsaw Uprising During World War II 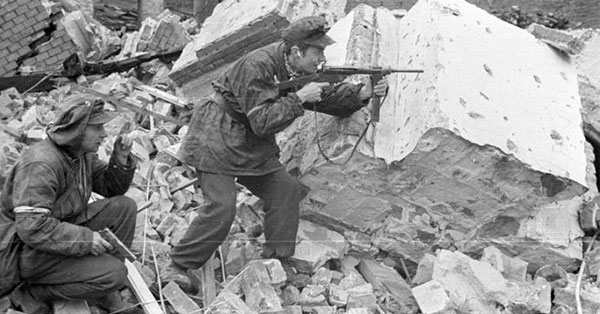 21 Moving Images of the Warsaw Uprising During World War II

In 1939, the Nazi German forces began their occupation of Poland. By 1944, the Russians were advancing from the East and the Allies from the West.

The Polish Home Army, Armia Krajowa, was a secret rebel force that had been stockpiling weapons, strategizing, and waiting for the opportune moment to take back their capital city. With the Red Army and the Allies in striking distance of Warsaw the time was right to implement Operation Tempest, Akcja Burza, the Polish efforts to regain control of Warsaw and several other key cities. As the two armies advanced, it became clear that the Russians would reach Warsaw first.

The initial plan had been to wait for the Western Allies to get to Warsaw and join the fight. The Polish Home Army favored a pro-Western, capitalist Poland. Instead, the Polish Home Army, in order to establish a claim to sovereignty after the war and avoid a pro-Soviet, socialist Poand, had to retake the city before the Russians could.

On August 1, 1944, the uprising began on what was named Godzina W, (named for the Polish word ‘wybuch’ explosion) W-Hour. Initially, the Polish Home Army took back the majority of central Warsaw. They radioed to the Soviets for ground assistance and air support but were ignored. It is believed that Stalin tactically halted his army to allow the Polish uprising to be defeated. This would give him the ability to liberate Warsaw for the Soviets and establish a socialist Polish state. The British Royal Air Force aided Poland by dropped supplies for the Home Army. The American Air Force eventually sent supplies after getting Soviet air clearance.

The Błyskawica Radio Station, established in the city center August 7, run by the Polish Army, was the only resistance radio station in all of Nazi occupied Europe. The station sent updates and requests for aid in Polish, English, and French, and also aired patriotic poems and music.

When it became clear to the Poles and the Nazis that the Soviets wouldn’t help, the Nazis were reinvigorated in their efforts to regain control of Warsaw. On October 2, the Polish Home Army had no choice but to surrender. It is estimated that in total, 16,000 members of the Polish resistance were killed.