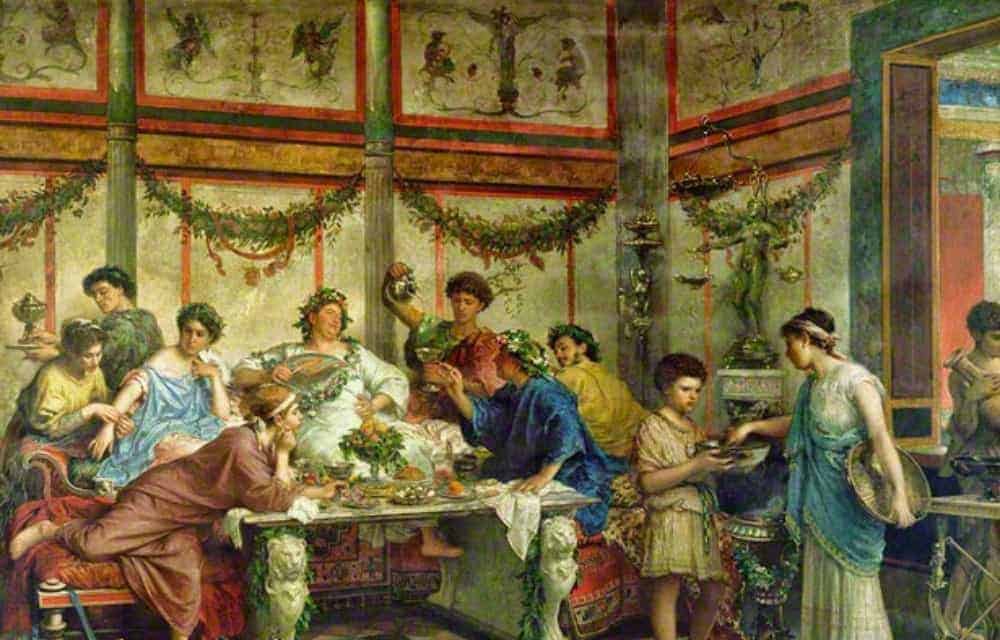 Abnormally tall and fat, with hanging flesh and a face flushed from alcohol, Vitellius is one of the few emperors whose statues perfectly capture what was written about his appearance. He never stopped eating, feasting at least three times a day (excessive for the ancients) while drinking copiously in between. You might assume from this that Vitellius was in no condition to enjoy healthy sex life. And you would be right; at least insofar as our sources go.

It was during his youth that Vitellius earned his sexual notoriety. He spent part of his childhood on Capri with his “friend” and former emperor, Tiberius. I say “friend” in inverted commas because during his time with Tiberius, and for reasons we really don’t need to go into, Vitellius came to acquire the nickname “tight-bum”. In fact, Suetonius tells he used his asset (for want of a better word) to great effect; the emperor’s access to it secured his father a political promotion.

After Tiberius’s death, he endeared himself to the emperor Caligula who repaid the favor by driving his chariot in Vitellius and crippling him for life. After Caligula’s assassination, Vitellius befriended his successor, Claudius (their friendship founded on a mutual love of gambling). Vitellius even managed to navigate (or should I say hobble) his way through Nero’s reign, taking up the emperor’s theatricality and playing the role of his biggest sycophant. He finally, and briefly, came to power during the civil war of 69 AD (known otherwise as The Year of the Four Emperors). Vitellius, to his misfortune, was the third.

His rule was short and not particularly sweet. He spent his few months in power eating his way around various houses of the Roman aristocracy, being excessively and unnecessarily cruel and—in order to fulfill a prophecy—starving his mother to death. His administration was guided by the counsel of one Asiaticus, a freedman who Vitellius made a knight. Many said that from a young age they had been mutual partners in buggery and this explained Asiaticus’s astronomical rise through the imperial court. This may or may not have been true. For Asiaticus’s sake we can only hope, on account of the presumably horrendous gout from which Vitellius suffered, it wasn’t.

Vitellius would meet a particularly nasty end on 22 December 69 AD. Upon the arrival of his rival Vespasian’s army, he was dragged from his hiding place. With his hands bound behind his back and a noose around his neck, he was hauled through the streets—the whole time being pelted by faeces and weight-related insults—towards the Gemonian Stairs. This was never a good place to be dragged as they were a commonplace of execution. And it was here, after a final plea to his people where he was executed. As a final insult, a hook was put through his lifeless body and he was thrown into the Tiber.

Domitian was the black sheep of the Flavian dynasty. Or at least that’s how our sources portray him. The last of three Flavian emperors, succeeding his father Vespasian (69-79 AD) and his older brother Titus (79-81 AD), Domitian ruled for 18 years, the longest reign of any emperor since Tiberius. But he shared the same fate as Nero in that, being the last ruler of a dynasty, he was always going to be reviled under the propaganda of the next. He was certainly ruthless. But while senators hated him his soldiers admired him, and on balance his policies and reforms and went a long way in setting the tone for the next century of peace.

A great deal of mystery surrounds Domitian’s love life. Unusually for a Roman emperor, he only married once. He rebelled against Vespasian’s attempts to wed him to his brother’s daughter, Julia Flavia. Instead, he betrothed himself to the woman he loved, Domitia Longina, after the small matter of making her divorce her husband. They appear to have had a happy marriage, save one significant hiccup in 83 AD. For reasons unknown, Domitia was banished from the palace and sent into exile—perhaps because of her failure to produce an heir, perhaps because Domitian was having an affair with Julia Flavia.

But she returned within a year, and other than this there doesn’t look to have been anything particularly noteworthy. That is until you read Suetonius. Right from the outset, the biographer writes about how Domitian would continually harass the wives of men of high reputation, following an autocratic precedent already set by Augustus, Caligula and Nero. He had a penchant for removing the hair from his lovers’ bodies with his own hands, Suetonius tells us, and loved nothing more than swimming in the baths with common prostitutes. He was adulterous with his niece, Julia Flavia, and in forcing her to abort their child, he ended up killing her.

A lot of this seems unlikely: reading more like political propaganda than a character portrait. But that doesn’t detract from the fact that it’s rampant, racy and a really good read. The best and most quintessentially Roman anecdote of all is that Domitian referred to sexual intercourse as “bedroom wrestling”. We will never know if it’s apocryphal or not, though my guess is that it probably is. However, the truth behind it is less important than the fact that it perfectly encapsulates the machismo of Roman sexuality, and adds a whole new layer of meaning to Seneca’s famous dictum vivere militare est—to live is to fight.

History Extra – In Bed with The Romans: A Brief History of Sex in Ancient Rome

Medium – The Diplomatic and Scandalous Sex Life of Julius Caesar