Peter the Great Pickled the Head of His Wife's Lover 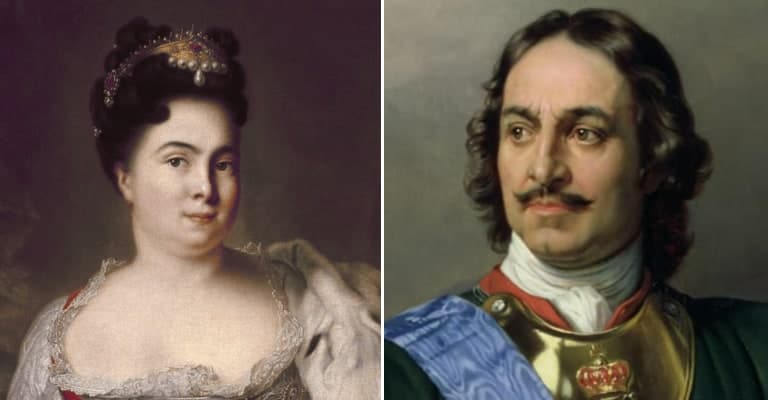 Peter the Great Pickled the Head of His Wife’s Lover

The Empress and Willem Mons

It did not take long before empress Catherine’s relationship with her new secretary began to attract controversy. Among other things, Willem Mons began abusing his position as gatekeeper for the empress’ correspondence in order to solicit bribes as a condition for passing messages on to Catherine. However, that petty corruption was not the main reason why tongues were set a-wagging throughout Russia: juicier and far more salacious rumors were soon making the rounds.

Lurid stories circulated about just what kind of relationship existed between the empress and Willem Mons. Gossip had it that the duo were lovers, and that Willem Mons’ sister, Matryona Balk, had been the matchmaker who had arranged the intimate affair. One of the juicier tales, according to historian Robert K. Massie in a biography of Peter the Great, held that “Peter had found his wife with Mons one moonlit night in a compromising position in her garden“. Whether the emperor had or had not actually caught his wife and secretary en flagrante, there is no doubt that Peter eventually got word of the stories surrounding his wife and her secretary.

Stung by the stories circulating, Peter the Great’s wrath fell upon empress Catherine’s secretary like a ton of bricks. Late one evening in November of 1724, the emperor’s men seized Willem Mons’ papers, and a few hours later, they hauled him off in chains, under arrest on charges of embezzlement and abuse of trust. His sister Matryona, who was rumored to have played matchmaker between empress and secretary, was also arrested, publicly flogged, and exiled to Siberia.

Catherine tried to intercede with Peter on her secretary’s behalf, but her pleas fell on deaf ears. When it became clear just how serious Peter actually was, Catherine’s concern shifted from her secretary’s fate to her own fate if her husband focused his wrath upon her. So she switched gears, and abandoning all attempts at intercession, Catherine went out of her way to display indifference. Willem Mons was subjected to a brief but brutal interrogation, then sentenced to death.

On November 28, 1724, eight days after his arrest, Willem Mons was publicly beheaded in Saint Petersburg. While her secretary was getting his head chopped off, the empress was taking dance instructions with her daughters, while hiding from her husband and the public any emotion she might have felt. That might have mollified Peter somewhat, and perhaps even saved Catherine’s own head. However, in a last display of his power, and perhaps to test whether his wife really was indifferent, he had Mons’ head preserved in alcohol and put in a large glass jar, which he then placed in Catherine’s bedroom.

It was not the first time Peter the Great had forced a woman in his family to stay close to the remains of her lover. In 1698, when Peter was still getting a feel for his power as Tsar, the Streltsy regiments – a sort of medieval Russian Praetorian Guard – rebelled, and made contact with his half sister, Sophia Alkesyevna. Sophia had ruled as regent when Peter was a child, but resisted surrendering her power when Peter grew up and sought to rule in his own right, so he had her locked up in a monastery.

Ten years later, in 1698, a lover of Sophia led the Streltsy in a failed uprising while Peter was out of the country, seeking to replace him with Sophia. Peter rushed back to Russia, but the rebellion had already collapsed by the time he returned home. Upon reaching Moscow, he brutally suppressed and broke the Streltsy, who were tortured and executed by the thousands. Peter played an active part in the executions, personally chopping off the heads of rebels with an ax in public, in what is now Moscow’s Red Square. He also strung up the bodies of executed Streltsy outside Sophia’s monastery, and left the corpse of her lover dangling from a rope directly outside her window.

Two decades later, Peter went back to his playbook of gruesome displays. When his mistress Mary Hamilton – who was also one of Catherine’s ladies in waiting – got on his wrong side, he had her arrested and charged with abortion, infanticide, theft, and slandering the empress. After she was beheaded, the emperor had Mary’s head pickled in alcohol. Peter thus seems to have gotten a kick out of showing the women around him just who was boss, and to have reprised the fates of Mary Hamilton and of his sister’s lover’s remains when deciding what to do with Willem Mons’ head.

Catherine, who maintained her cool throughout, survived the tempest, and succeeded Peter on Russia’s throne when the emperor died a few months later. One of her earliest acts as sole empress was to make it up to Willem Mons’ sister, Matryona, by recalling her form Siberia, rehabilitating her as an imperial favorite, and lavishing gifts and honours upon her. As to her former secretary’s pickled head, Catherine kept it in her possession until her death – a ghoulishly sentimental memento of a man she might have actually loved.

Atlas Obscura – What Happened to the Severed Head of Peter the Great’s Wife’s Lover?

History.Info – Did You Know Peter the Great Allegedly Made His Wife Keep Her Lover’s Severed Head in Her Bedroom

Esquire Magazine – Peter the Great & the Severed Head: the Morbid Beheading of his Wife’s Confidant