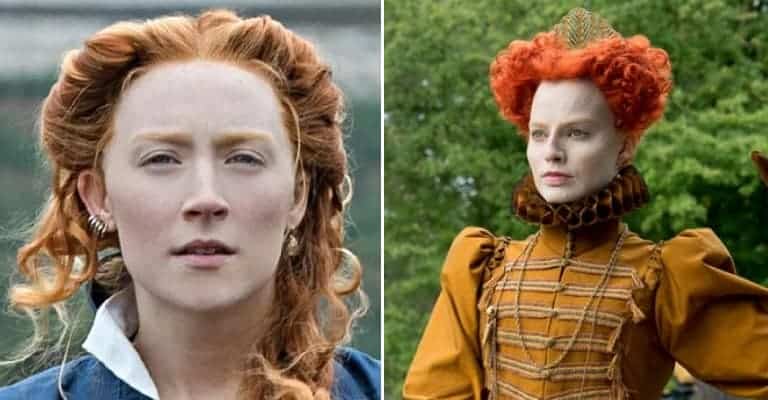 8. Correct: Elizabeth I of England did wear immensely complicated and elaborate wigs, plastering herself with lead-based makeup to obscure the scars of smallpox and effects of time

Earning Mary, Queen of Scots an Academy Award nomination for Best Makeup and Hairstyling, one of the film’s most redeeming historical qualities is its physical depiction of the changing public image of Elizabeth I of England. The Virgin Queen, renowned for her beauty and desirability throughout Europe, used this persona in no small part to retain ownership of her crown without the support of a husband or consort, carefully crafting every aspect of her physical appearance to maintain this perception. However, due in part to the ravages of smallpox, as well as the passage of time, Elizabeth was forced to apply ever more intrusive means to create this illusion of perpetual youth.

Her almost fatal encounter with smallpox had not only rendered Elizabeth scarred and pocked, but had also left the Queen of England half bald. To combat this unsightly appearance, combined with the deterioration of her natural reddish coloration with age, for the remainder of her life Elizabeth was forced to rely upon wigs. A sign of prestige in Tudor England, Elizabeth reputedly donned immensely ostentatious hairpieces of bright red designed to both intimidate and catch the eye. Equally, Elizabeth endured hours each day of maids painting her face with a lead-based makeup to disguise her scars, inadvertently orally ingesting a distinctly unhealthy quantity of the toxic substance.

7. Wrong: While Mary undoubtedly considered Elizabeth to be her inferior, the Queen of Scotland would never have expressed this belief directly to her English cousin

In the climatic face-to-face meeting between Mary and Elizabeth in Mary, Queen of Scots, the dethroned Scottish Queen denounced her English cousin’s criticisms. Responding that she would not be “scolded by her inferior”, moving beyond the already considered historical reality that the pair never, in fact, met in person, Mary’s behavior in this scene would never have transpired in real life. Not only was Elizabeth at this time Mary’s salvation, fleeing from imprisonment in Scotland and hoping the English Queen might assist her in reclaiming her lost crown and child, but Mary would have felt no need to explicitly state something so impolitely which she believed to be true.

However, that Mary did indeed regard herself as Elizabeth’s better is incontrovertibly accurate. Along with the bulk of her Catholic contemporaries across Europe, Mary was considered the rightful ruler of England due to Elizabeth’s heretical Protestantism, as well as a treasonous mother, invalidating her claim. Mary repeatedly sought to contest the throne of England, strongly opposing the Treaty of Edinburgh in 1560 – which declared Elizabeth the official monarch and denied Mary the right to use the arms of signs of England and Ireland in her heraldry – successfully blocking its ratification.

6. Correct: Although not believed to have been intimately involved with David Rizzio, Mary’s second husband, Lord Darnley, is suspected of having relationships with other men

Departing London on February 3, 1565, Henry Stuart, Lord Darnley, presented himself before Mary on February 17 at Wemyss Castle. Instantly besotted with the Englishman, the pair were within days inseparable from one another’s company. Mary’s half-first-cousin via two different marriages by their grandmother, Margaret Tudor, consequently placing both Darnley and Mary prominently in the line of succession for the English crown, the couple were married on July 29, 1565. In advance of the wedding, Elizabeth commanded in vain Darnely, one of her subjects, to return to England in an attempt to prevent the union against her.

As accurately portrayed in Mary, Queen of Scots, Darnley and Mary’s relationship quickly soured following their nuptials. Arrogant and prone to excessive drinking, Darnley was an unpleasant husband who grew immensely jealous of his wife’s companions, especially David Rizzio. Despite his own extramarital relations with women, habitual chasing after others even once married, historical evidence suggests Darnley equally engaged in same-sex relations. Of particular note, and overlooked by the film in favor of a fictional relationship with Rizzio himself, Darnley’s close friendship with Don Francisco de Alava has come under modern scrutiny, with the pair described as “intimate” and enjoyed prolonged overseas trips together.

5. Wrong: Whilst Mary did indeed flee Scotland after being forced to abdicate in favor of her infant son, James Stuart, the former Queen of Scotland was imprisoned for a year before she could actually escape to England

As represented accurately in Mary, Queen of Scots, in the aftermath of the death of Mary’s second husband, Lord Darnley, the Scottish Queen sought to quickly remarry a member of the nobility believing it would shore up her claim. Overlooked by the cinematic production was that her protector, James Hepburn, Lord Bothwell, abducted Mary on April 24, 1567, likely raping her at Dunbar Castle, before forcibly marrying the widowed monarch at Holyrood on May 15. Prompting outrage among the wider nobility, with the public scandalized by their ruler marrying the very man accused of murdering her former husband, a coalition formed to remove Mary from the throne.

Confronting her enemies at Carberry Hill, her army deserted during negotiations leaving Mary no option but to abdicate the crown in favor of her one-year-old son on July 24. However, whereas Mary, Queen of Scots, largely for the sake of narrative pace, depicts Mary immediately departing into exile in England, in reality the former monarch was imprisoned at Loch Leven Castle for more than a year. Escaping on May 2, 1568, Mary raised an army of six thousand but was defeated at the Battle of Langside eleven days later. Only after this loss did Mary flee across the border, entering via fishing boat, in the hope her cousin would provide military assistance.

Approximately eight months after the birth of Mary’s son James, on February 10, 1567, his father, Lord Darnley, suddenly died at Kirk o’ Field, Edinburgh, where the royal consort had been staying. Brought back by Mary after a period of estrangement to recover from an illness, claimed at the time to be smallpox but more recently speculated to have been syphilis, around two in the morning on the night of the tenth an explosion rocked the foundations of Kirk o’ Field. The product of two barrels of gunpowder placed in a room beneath Darnley’s sleeping quarters, the assassination failed to immediately claim the life of Darnley.

Miraculously surviving by reasons unknown, lying in just a nightshirt Darnley’s body, alongside that of his valet, William Taylor, were found in a nearby orchard. Although official post-mortems claimed the explosion had taken his life, speculation circulated, including by surgeons who examined the body, that the consort had been strangled. Depicting the latter cause of death explicitly, Mary, Queen of Scots carefully treads the line of historical accuracy by strongly implying, but never explicitly stating, whether or not Mary herself was responsible for the murder. Never admitting wrongdoing, and denying it throughout her life, either way, Mary mourned little for her husband’s death.

3. Correct: Expressing accurately the difficulty placed upon Elizabeth, the Virgin Queen was nevertheless compelled to sign her cousin’s death warrant after Mary became closely implicated in an assassination plot against the English monarch

Neglected for the most part by Mary, Queen of Scots, the period of Mary’s imprisonment, and accordingly the series of plots against Elizabeth I, received limited airing. Executing the Duke of Norfolk after discovery of the Ridolfi Plot – a scheme to replace Elizabeth with Mary through the aid of Spanish troops – in 1571, following the Throckmorton Plot in 1583 the Bond of Association and Act for the Queen’s Safety was passed. Sanctioning the death of any individual who plotted against Elizabeth, the Babington Plot of 1586, which sought to assassinate Elizabeth, was to be Mary’s ultimate downfall.

Consenting to the plot in letters intercepted by the Queen’s men, although Mary protested the words were not written by her hand but instead forged, the Babington Plot wished to supplant Elizabeth and restore a Catholic monarchy in England. Arrested whilst out riding, Mary was placed on trial for treason in October 1586. Continuing to assert her innocence, as will be discussed Elizabeth did not desire her cousin’s death. However, part of Mary’s defense was her status as a queen, placing her above the judgment of English courts, inexcusably putting Elizabeth in an awkward position. Relenting at last, Elizabeth was forced to order Mary’s death for her alleged crimes.

2. Wrong: Elizabeth did not sign the death warrant of Mary Stuart surrounded by councilors in a special meeting, nor did the English Queen probably intend for her cousin to be executed at that time

As depicted in Mary, Queen of Scots, overlooking the nineteen years of Mary’s captivity in England, hastily compressed into only a couple of scenes at the end of the movie is the eponymous character’s death. Concluding with Mary’s execution, on February 1, 1587, Elizabeth finally signed a death warrant for her cousin and entrusted it into the care of William Davison. Unlike in the film, however, Elizabeth did not sign the warrant with any pomp or circumstance, nor did she in front of her privy councilors. Instead, it is likely the order was signed as part of a routine series of documents in private without special comment.

Similarly ignored by Mary, Queen of Scots was the immediate aftermath of the execution itself. Having been called, in secret, a meeting of some members of the privy council on February 3, it was agreed to carry out the execution immediately. Beheading Mary on February 8, the sentence was performed without Elizabeth being informed of the proceedings. Reportedly becoming outraged and irate, it is unclear whether Elizabeth’s anger was merely for show as a form of plausible deniability or if she had not actually intended to kill her cousin. Imprisoning Davison in the Tower of London, the unfortunate noble was only released after other councilors interceded on his behalf.

1. Wrong: Cutting to black with a swing the executioner’s ax, implying the sudden beheading of Mary Stuart, the execution of the former Queen of Scotland was, in fact, a botched affair

Informed on the evening of February 7, 1587, that she was to die the following morning, Mary Stuart walked freely and with dignity onto the scaffold erected in the Great Hall of Fotheringhay Castle. As depicted accurately in Mary, Queen of Scots, two servants removed their mistresses outer garments to reveal a crimson petticoat: the liturgical color of martyrdom in the Roman Catholic Church. Accepting a blindfold, unlike in the film whereupon she refuses it, Mary, Queen of Scots ends by cutting to black as the executioner swings his ax down upon the neck of the condemned and praying Mary.

Strongly implying Mary’s sudden death, the real-life execution of the Queen of Scots was far less clean. Having accepted per convention the apologies of the executioner, replying “I forgive you with all my heart, for now, I hope, you shall make an end of all my troubles”, the pardoned soul incompetently bungled his task. The first blow failed to behead the slender woman, missing Mary’s neck and striking instead the back of her head. Unsuccessful with his second swing, the next attempt severed Mary’s neck albeit not entirely, remaining connected by pieces of sinew. Forced to cut through the remnants with his ax, the executioner finally completed his gruesome objective.

“Elizabeth I: The Golden Reign of Gloriana”, David Loades”, The National Archives (2003)

“The Life and Times of Elizabeth I”, Neville Williams, Weidenfeld and Nicolson (1972)

“These Letters Tell the Inside Story of Mary, Queen of Scots’ Imprisonment”, Brigit Katz, The Smithsonian Magazine (January 8, 2018)