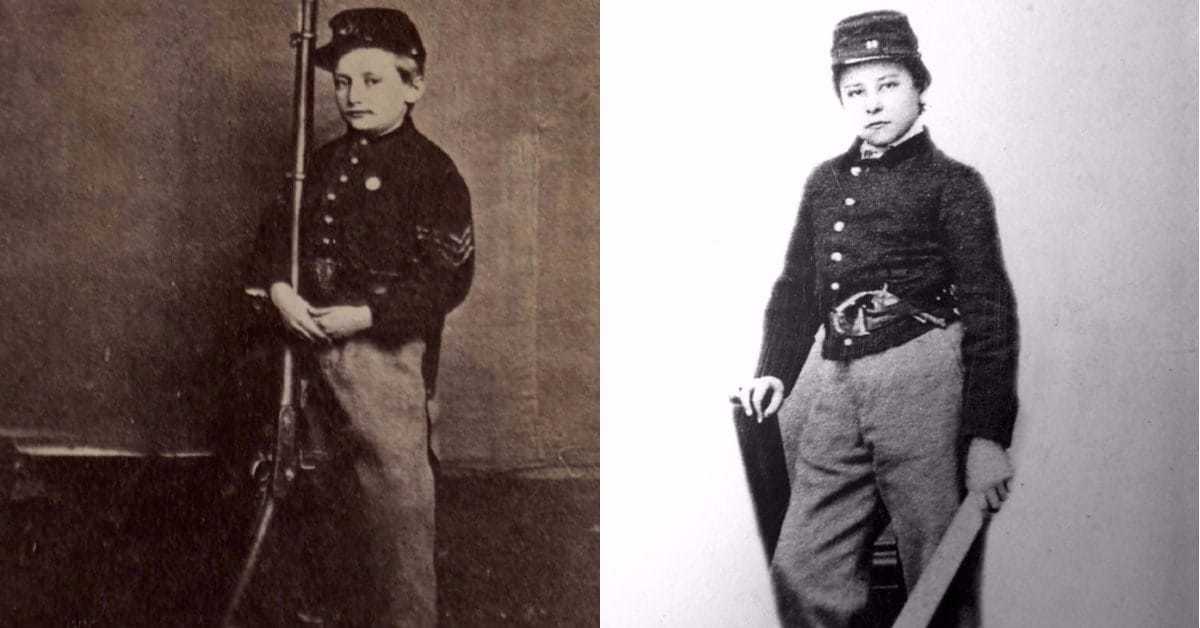 Born in 1853, Edward (William) Black was the youngest known child soldier to have served during the Civil War. Joining the 21st Indiana Infantry in 1861, aged 8, Edward served as a drummer in that regiment. Sent home after a few months, Edward returned, this time with his father, and was reenlisted in the regiment as a drummer boy.

Edward traveled the continent as the 21st Indiana’s drummer. He served in the regiment as it garrisoned Baltimore, accompanied it on an expedition to the Eastern Shore, thence to Newport News, Virginia, before getting shipped to serve in the Department of the Gulf, where the young lad’s unit fought in Louisiana as part of the campaign that resulted in the Union’s seizure of New Orleans from the South.

In 1862, young Edward was captured by Confederates during the Battle of Baton Rouge and imprisoned in Ship Island, but regained his liberty when federal troops overtook his captors and freed the Union prisoners.

Discharged in September of 1862, Edward reenlisted in February of 1863 with his old unit, which in the interval between his discharge and reenlistment had been converted from infantry to artillery, and reconstituted as the 1st Indiana Heavy Artillery Regiment. He would serve with the 1st Indiana Heavy Artillery as that regiment was kept busy until war’s end, seeing active duty in Berwick Bay, conducting operations in Western Louisiana, participating in the advance on and the subsequent siege of Port Hudson, joining the Sabine Pass Expedition, before finally settling in for garrison duty, first at New Orleans, and then at Baton Rouge.

During that extensive service, the young boy was wounded more than once. In one instance, when he was 12 years old, he was grievously injured when an exploding shell shattered his left hand and arm. Edward’s injuries earned him the unfortunate distinction of being the youngest Civil War soldier injured on active duty.

At war’s end, Edward and his unit remained in the vicinity of Baton Rouge as garrison troops, until January of 1866, when the 1st Indiana Heavy Artillery was finally mustered out, and its personnel were discharged.

Edward Black never fully recovered from injuries he received during the war, nor from the mental trauma of what he had been exposed to at such a tender age. He died in 1872, aged 17, and was buried in Indianapolis. His drum was passed on down his family over the generations, before it was finally gifted to the Children’s Museum of Indianapolis. There, it remains on display to this day as one of the museum’s most prized and popular exhibits.

Born John Klem in Ohio in 1851, young Johnny, who would change the spelling of his last name to Clem and adopt Lincoln as a middle name in homage to the president, was perhaps the best known of the Civil War’s child soldiers. He ran away when he was 9 years old, following the death of his mother, to enlist in the Union Army in 1861. Rejected by various units due to his age and small size, little Johnny latched on to the 22nd Michigan Infantry regiment when it mustered in 1862, and followed them around. The regiment’s members eventually relented, allowed him to tag along as a mascot and drummer boy, and even voluntarily raised money to pay him the $13 per month monthly wage of a Union private. In 1863, he was finally allowed to officially enlist.

It was during the Battle of Chickamauga, September 19 to 20, 1863, that John Clem earned his place in Civil War lore and legend. During the two-day battle, the 12-year-old displayed conspicuous courage, after riding to the front atop an artillery caisson. There, fighting on the firing lines with his signature weapon, a sawed-off rifle that had been trimmed to fit his diminutive size, Clem impressed his comrades with his bravery and steadiness under fire, and in hand to hand combat as Rebels and Yankees charged and counter charged each other and came to close-quarter grips during the ferocious fighting that marked that battle. In the course of the fighting, Clem’s Army cap was shot through three times by bullets.

Clem’s courage was not enough to ward off Union defeat, however, and the federals came to grief. At the close of the battle the following day, during the afternoon of September 20, 1863, as Union forces hurriedly retreated, Clem found himself one of the thousands of defeated soldiers separated from their units during the chaotic flight. Wearily lugging his sawed-off rifle, Clem heard a horse approaching from behind, and looking back, was confronted by a Confederate colonel on horseback, riding ahead of and urging along his pursuing Rebel soldiers. Seeing a little boy in Union blue toting a rifle, the enemy colonel shouted at Clem to “Drop that gun!” and surrender forthwith.

Young Johnny turned around, coolly raised his rifle, took aim, and shot the Confederate colonel off his horse, then hauled off at a mad sprint through brambles and brush until he reached the safety of Union lines. After the battle, Clem, aged 12 years old, was officially promoted to the rank of sergeant, thus becoming the youngest noncommissioned officer in the history of the United States Army. A distinction he holds to this day.

Clem’s conduct was widely reported in newspapers at the time, turning him into a nationally-known figure, and he was eventually decorated for his courage by Salmon P. Chase, Secretary of the Treasury and future Chief Justice of the United States Supreme Court. A popular Civil War song, “The Drummer Boy of Shiloh“, written by William S. Hays and published in Harper’s Weekly soon after the Battle of Chickamauga, was reported to have been inspired by the exploits of Clem.

A month later, Clem was captured and made prisoner by the Confederates. Released in a prisoner exchange, he returned to ranks and fought in the Army of the Cumberland. Twice wounded during the war, he was finally discharged in September of 1864.

Following the war, Clem graduated high school in 1870, then rejoined the US Army in 1871, when he was commissioned a second lieutenant by President Grant. He married twice, raised a family, and served until 1915, before retiring as a general and as the last Civil War veteran still serving in the United States Army. John Lincoln Clem died in 1937, aged 85, and was buried in Arlington National Cemetery.