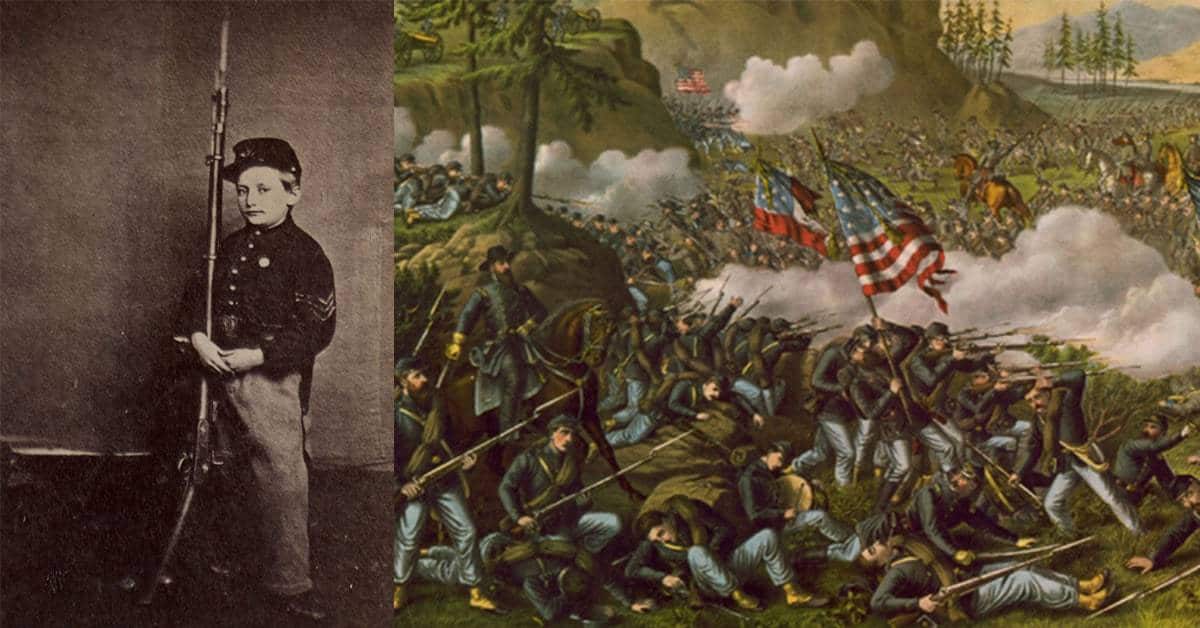 The Battle of Chickamauga, fought from 18-20 September 1863, resulted in a Confederate victory, over 34,000 casualties and almost 4,000 deaths. In the midst of battle, a Confederate colonel spotted a young boy in Union uniform brandishing a rifle. He apparently ordered the boy to surrender and reportedly said: “I think the best thing a mite of a chap like you can do is drop that gun.” Instead, the drummer boy of the 22nd Michigan Infantry, John Clem, shot the colonel and scurried back towards friendly lines. It was the day that a legend was born.

John Joseph Clem (spelled ‘Klem’ on his enlistment documentation) was born in Newark, Ohio on August 13, 1851. After his mother died in 1861 when she was hit by a train, 9-year John ran away to enlist in the Union Army as a drummer boy. He approached Captain Leonidas McDougal of the 3rd Ohio Union Regiment in the belief that his help was required. McDougal reportedly said: “I’m not enlisting infants, son.” In the Civil War, it wasn’t uncommon for boys as young as 14 to fight on the battlefield. In some cases, a boy might enlist with his father or grandfather and the army would accept him.

Little Johnny refused to quit and tried to join the 22nd Michigan Infantry. While it also refused him, he followed the unit until 1862 and served as a mascot and drummer. The army officers were so impressed by his determination that they finally allowed him to enlist officially in 1863. They even chipped in to pay his $13 monthly salary until he was a member of the group. While in the Army, he changed his name to John Lincoln Clem because he admired President Lincoln and because he thought ‘Clem’ sounded more American than ‘Klem.’

The Myth of Shiloh

There is a popular tale attributed to the life of Clem which is almost certainly a myth. It suggests that he was a drummer boy for the 22nd Michigan at the Battle of Shiloh on April 6-7, 1862. According to the legend, Clem was struck by shrapnel which went through his drum; it knocked him unconscious. His comrades found him lying on the field, and they rescued him before it was too late. They later gave him the nickname ‘Johnny Shiloh.’

In reality, the weight of evidence suggests that Clem was never at the Battle of Shiloh. First of all, the 22nd Michigan was not in active service until August 1862 which is, of course, several months after the battle. The entire Johnny Shiloh story probably comes from a song written by William S. Hays after the Battle of Chickamauga. Clem had become a national hero at that stage.

It is a little odd that the New York Times published an article in 1915 that tried to add weight to the myth. According to the publication, Clem “got into the very hottest of the fight.” Indeed, there is a suggestion that the tale about Clem running away from home aged nine and trying to join the Ohio Infantry is also a myth. However, he always stuck to his claim that he fought at Shiloh. Members of the 3rd Ohio may have fought in the battle, and in theory, Clem could have joined them. Whatever happened in Clem’s early years, sources tend to agree that his legendary actions at Chickamauga occurred.

The Musket is Mightier than the Drum

At the Battle of Chickamauga, Clem was given a musket that was sawn down so he could carry it. At some point in the battle, he came across a Confederate colonel and didn’t hesitate to shoot him. Clem was promoted to the rank of Sergeant after the battle; at 12-years of age, he became the youngest noncommissioned officer in U.S. Army history. Although the story says that he killed the Confederate colonel, there is a suggestion that he only wounded Calvin Walker of the 3rd Tennessee.

Clem soon learned the harsh realities of the Civil War in October 1863 when he was captured by Confederates in Georgia. They confiscated his U.S. Army uniform; his cap allegedly had three bullet holes in it. According to Clem, he was held by the Confederates for two months, and in that time, they used him as propaganda. They ran campaigns suggesting that the Union was in dire straits because it needed babies to fight for it. He was extremely upset when they stole his uniform and stories about his situation spread like wildfire in the north. A number of women in Chicago began working to ensure little Johnny had a new uniform when he was released.

This setback didn’t prevent Clem from continuing to participate in the Civil War. He was involved in the Battles of Perryville, Kennesaw, Murfreesboro, and Atlanta. Clem was wounded twice during this period as part of the Army of the Cumberland and was discharged in September 1864.

While life was undoubtedly tough for veterans of the Civil War once the conflict had ended, Clem had youth on his side; after all, he was only a teenager when the war was over. He went back to High School and graduated in 1870. Given his previous experience, it is hardly a surprise to learn that he wanted to pursue a career in the military. First of all, he achieved the rank of commander/captain of the Washington Rifles in 1871.

Clem’s next goal was to enter the U.S. Military Academy, but it was not the formality he anticipated. As he pointed out, entry to West Point was based on academic achievement rather than combat experience. He was at an extreme disadvantage because he had left school before the age of ten. As a consequence, his schooling was in ‘tatters’ so he failed the entrance exam. Incredibly, there was a possibility that a Civil War hero’s military career could have been over at the age of 20.

Fortunately, his fame proved a major asset because it allowed him to see Ulysses S. Grant, who was President at the time. Clem had claimed that Grant ordered him to play the Long Roll at the Battle of Shiloh. Whether or not this was true, Clem was well known across the United States at that point, so Grant was certainly aware of whom he was. According to Clem, Grant said: “We can do better than that” when he learned of his problems with the entrance exam and appointed him second lieutenant in the 24th U.S. Infantry in December 1871. It was the beginning of a lengthy career in the army.