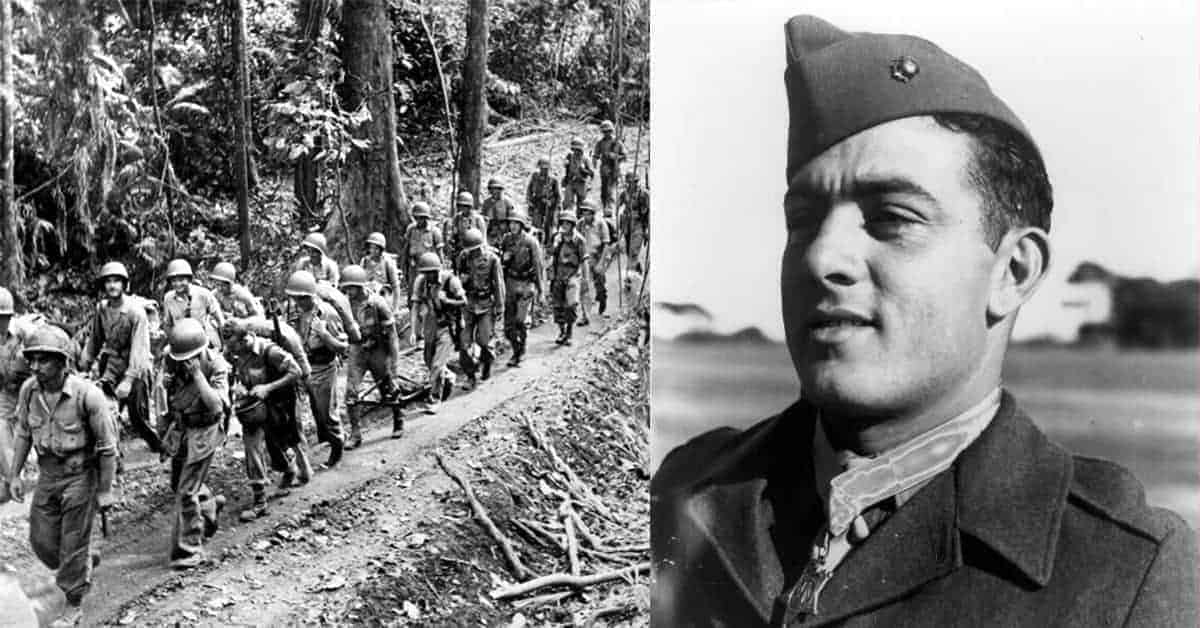 With the hindsight that history gives us, it’s often easy to imagine that victory in World War II was never really in doubt. In the popular history of the conflict, we often remember that there were moments when things looked a little bleak (Dunkirk or the Battle of Britain), but once the US entered the war, victory was more or less inevitable. But that idea of the war doesn’t really do justice to the moment the world was in during late 1941. Hitler’s legions marched lockstep across Europe, subjugating nation after nation. And in the Pacific, a Japanese sneak attack knocked out most of the US fleet.

America hadn’t been to war in almost 30 years. And its national mythology was reeling from a defeat at Pearl Harbor. America needed heroes. And it needed a turning point in the war; A moment when it shifted from the defensive and back onto the offensive. And one night on the small island of Guadalcanal, America finally got both. That night, Marine Gunnery Sergeant John Basilone led his men in action through the ink-black jungle. His fight helped turn the tide of war in the Pacific and gave the folks at home the courage they needed to keep up the struggle.

John Basilone was the child of Italian immigrants, born November 1916 in Buffalo, New York. John joined the Army shortly after turning 18 and was shipped out to the Philippines where the US was winding down a decades-long occupation of the islands. John served there for three years, even winning an inter-service boxing championship. After his tour of duty was over, John returned to the US and got a job driving trucks for a few months before deciding he missed the action. Thinking that he could get back overseas faster if he enlisted in the Marines, John joined in 1940. But as fate would have it, John was never sent back to Philipines.

On December 7, 1941, while John was in basic training, a fleet of the Empire of Japan launched a sudden attack on the US naval base at Pearl Harbor. The attack was meant to knock the American Pacific Fleet out of the war, buying the Japanese time to invade the Dutch and British Colonies in South East Asia. And with 100 ships destroyed and two thousand American personnel killed, it’s easy to imagine how the Japanese might have been optimistic about their prospects in the war.

What the Imperial Navy hadn’t planned on was the enormous industrial strength of the United States. And by the summer of 1942, the US Pacific fleet was rebuilt, rearmed, and ready to take the fight to the enemy. The US Marine Corps quickly launched an island-hopping campaign, taking Japanese outposts as the fleet inched every closer across the vast Pacific and towards the Japanese Home Islands. And John Basilone’s unit was tapped to help take the tiny, jungle island of Guadalcanal. But no one, least of all Basilone, knew just how fierce the battle would be.

For the first few months of the War in the Pacific, the Japanese Navy and Imperial Marines rapidly occupied Allied positions in the Pacific. The Philippines had fallen, along with British Malaysia and the Dutch East Indies. In August 1942, the Allies got word that the Japanese were constructing a major airfield on the island of Guadalcanal that would bring Australia within range of Japanese bombers. If left unchecked, the Japanese might even be able to invade Australia itself. The Allies couldn’t let that happen and US Marines were dispatched to see that it didn’t.

The Marines launched a massive amphibious invasion of the island, storming the beaches and driving the Japanese defenders deep into the jungle-covered heights. As the Marines took control of the beachhead, they set to building an airfield to help support further operations, calling it Henderson Field after an Allied Airman who had recently been killed. But that October, 15,000 fresh Japanese troops landed on the island to reinforce the defenders.

Over the next few weeks, the Japanese quietly moved into position around Henderson Field against which they would launch the main force of a devastating counter-attack. And that was where John Basilone and his men of “D” company, 1st Battalion, 7th Marines found themselves on the night of October 24th. Basilone patrolled the perimeter of the field, peering into the inky-black Jungle, struggling against the calls of tropical birds and the swarming insects to detect the sound of approaching Japanese.

Suddenly, out of the jungle came a deafening cry of “Banzai,” or ten thousand years for the Emperor, as 3,000 Japanese troops of the Sendai division hurled themselves at the wire surrounding Basilone’s position. Rifles barked to life as Basilone leaped behind his heavy Browning machine gun and poured withering fire into the charging Japanese. Within five minutes, the night grew silent. Basilone’s men looked over their defenses to see over two hundred of the enemy lay dying on the field. Basilone’s quick thinking and accurate fire had completely broken the first wave. The respite Basilone had won wouldn’t last. And within the shadows, the next wave of Japanese picked up the cry and began charging towards the American position. The Japanese were fanatical in their devotion to their nation and their emperor, offering their bodies as a sacrifice to victory.

The unrelenting tide of their assault began to overwhelm American positions. Basilone watched as his defenses began to falter and his men were crippled by shrapnel from Japanese grenades. And worst of all, ammunition was beginning to run low. Unholstering his .45, Basilone rushed through Japanese lines, firing point-blank at the enemy. He ran from position to position, bringing much-needed ammunition and repositioning machine guns to where they were needed most. Over the course of the next few hours, thousands of men died in some of the most intense fightings of the war. Dawn broke and the Japanese withdrew, but for Basilone and his men, the fight had just begun.

If the men of “D” company hoped that the morning would bring peace from the Japanese attacks, they were soon disappointed. The human wave attacks continued throughout the morning as the Marines fought desperately to survive. And as the Japanese fell before the American guns, Basilone realized his men faced a new problem. The dead were beginning to pile up in front of their position, creating a wall of corpses that allowed the enemy to creep closer out of sight before swarming over the dead and trying to overwhelm the Marines with bayonets.

Basilone jumped into action again, using breaks in the fighting to clear bodies out of the way, often under heavy fire, before returning to coordinate the defense and clear jams from the machine guns. And as the fighting continued on the ground, Japanese planes came screaming through the air. Mitsubishi Zeros launched strafing attacks and dive bombers dropped heavy explosives on the runway of Henderson Field, preventing Allied planes from getting airborne.

The fighting continued nonstop for two days as the Marines struggled without food or water. By the time the smoke cleared on the final day, an entire regiment of Japanese soldiers lay dead and the fight for Guadalcanal was essentially over. After word of Basilone’s actions spread throughout the Corps, he was nominated for the Congressional Medal of Honor. And after the American public heard of Basilone’s heroism, he became a major celebrity. The Marines decided that Basilone was needed back home, where he gave speeches to packed audience halls calling on everyone to buy war bonds to help fund the war effort. But once again, Basilone felt the call to action. He couldn’t abide staying at home while his men fought and died in the Pacific.

After months of lobbying the military, Basilone was finally transferred back to active duty and sent to join a Marine regiment preparing to invade the southern Japanese island of Iwo Jima. Iwo Jima was to serve as one of the final staging areas for an invasion of the Japanese Home Islands. Taking Iwo Jima would be one of the final nails in the coffin for the Japanese war effort. The Imperial Navy knew this as well as the Americans and so they resolved to hold the island at any cost. They dug extensive fortifications into the volcanic rock and swore to hold them to the last man.

Basilone joined the other Marines in the early stages of the assault. Basilone led his men in their assault on the Japanese positions. As the Marines stormed up the beaches and into the heights, Basilone personally destroyed several Japanese bunkers with grenades and machine-gun fire. But as he led the charge, mortar fire exploded nearby, launching razor-sharp shrapnel into Basilone. The wound proved fatal, and Basilone fell on Iwo Jima along with hundreds of other marines. But his heroism in battle provided an example of courage that inspired the nation through one of the darkest hours in world history.