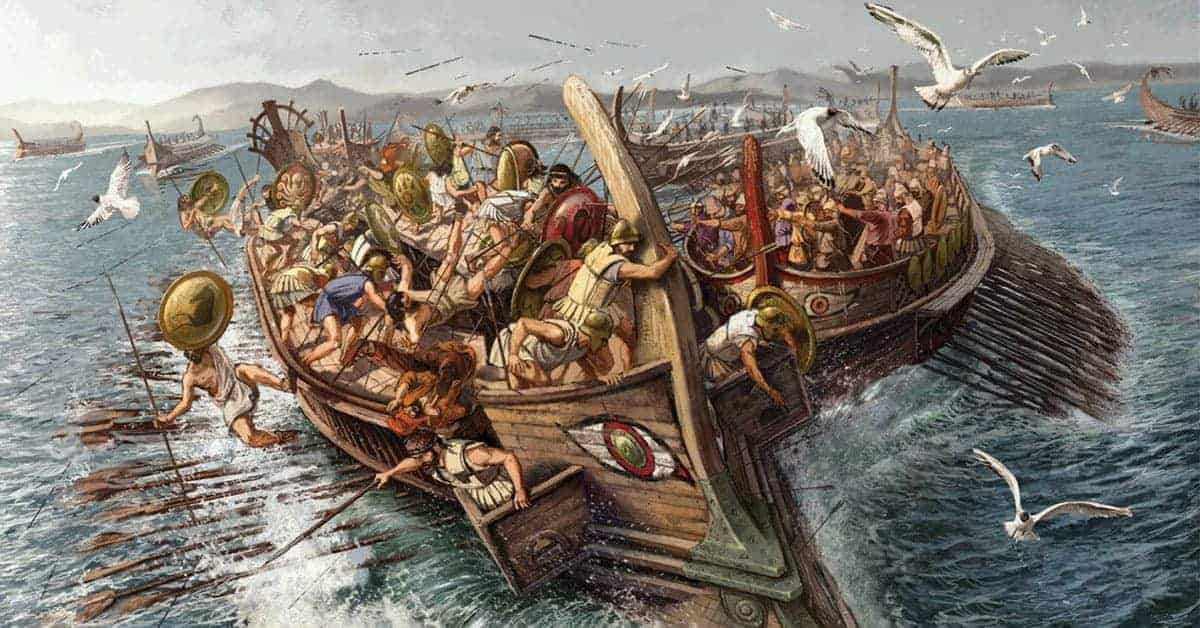 The Battle of Lade was a naval battle during the Ionian Revolt. The Ionian cities had allied together with the Lesbians in order to revolt against the Persian Empire of Darius the Great. The Greek cities of Asia Minor were angry over the tyrants that had been appointed by Persia. The tyrant of Miletus in 499 BCE was Artaphernes who decided to go on a mission to conquer Naxos in an attempt to curry favor in Miletus. The attempt was a failure and instead of being removed from Miletus, he decided to incite the Ionian people into rebellion.

The rebellion quickly spread and Persian forces spent three years fighting in Asia Minor but were never able to get the decisive victory they needed to put down the rebellion. In 494 BCE the Persian army and navy were sent straight to Miletus, where the rebellion had begun. The Ionian fleet gathered at Lade, an island off the coast of Miletus. The land defense of Miletus was left to the Milesians as the Ionians focused their attention to the sea.

The Persians were not sure they could defeat the Ionians outright and therefore tried to get some of the forces to defect. They were unsuccessful at first but once the fighting began, the Samian fleet accepted the Persian offer. When the Persian and Ionian fleet met, the Samians sailed off to join the Persians which collapsed the Ionian battle line. 11 Samian ships did stay behind refusing to abandon the Ionians. The Chian navy and a number of other ships also stayed behind and faced huge casualties. Eventually, the Chian ships could remain no longer and sailed back to Chios which ended the battle.

The defeat of the Ionian fleet spelled the end of the revolt as well. Miletus suffered greatly with most of the men killed and the women and children enslaved by the Persians. Many Samians were furious with the actions of their generals and decided to settle on the coast of Sicily with the people of Zancle. Milesians that were able to escape also settled there. Darius also sought to punish Athens and Eretria for supporting the revolt and invaded Greece the following year.

Battle of the Aegates 241 BCE

The Battle for the Aegates is also known as the Battle of the Egadi Islands and took place on March 10, 241 BCE. By the time the battle took place the First Punic War between Rome and Carthage had been going on for several years. The years preceding the Battle of Aegates were relatively quiet, partially because Rome did not have a fleet of her own. Her fleet had been mostly destroyed in the Battle of Drepana and the following storm.

Carthage did little to take advantage of the fact that Rome was defenseless at sea. So in 242 BCE, Rome decided to rebuild their fleet and regain the superiority of the seas. Rome was largely broke due to 20 years of war and therefore it fell upon the wealthy nobles of Rome to finance the new fleet one ship at a time. In the end, the nobles built, equipped and crewed 200 ships without any monetary assistance from the government. Carthage knew the Romans were building a fleet and decided to build one of their own with 250 ships, though theirs were likely undermanned.

The new Roman fleet, completed in 242 BCE laid siege to two Sicilian ports and waited for the Carthaginian response. It came in 241 BCE when the Carthaginians set sail for the besieged cities. The Roman fleet decided to sail out to meet the Carthaginians. They stripped their boats of everything but the bare necessities which made them faster and more maneuverable.

The Battle of Red Cliffs occurred in 208 CE during the Han dynasty. The warlord Cao Cao controlled the northern regions of China and had his sights set on the southern part. To this, he needed to get control of the Yangtze River in order to have access to the rest of the southern region. The Yangtze River region was controlled by Liu Biao of the Jing Province, who controlled the area west of the mouth of the Han river, and Sun Quan controlled the region east of the mouth of the Han river. Liu Bei was another enemy of Cao Cao living in refuge with Liu Biao with his own forces.

Cao Cao was initially successful, forcing Liu Biao to retreat and getting the naval base that he wanted. Liu Biao died from disease soon after and his son surrendered to Cao Cao. Cao Cao then sent a letter to Sun Quan boasting the size of his forces and urging the warlord to surrender. Liu Bei on the other hand wanted to strike an alliance with Sun Quan and defeat Cao Cao. Liu Bei had a force of 20,000 to add to the 30,000 of Sun Quan. Cao Cao claimed to have 80,000.

Sun Quan decided to fight and the allied force headed to the Red Cliffs to meet Cao Cao’s forces. When they arrived, the enemy forces were low on morale and suffering from disease due to the long marches. The Sun-Liu forces quickly pushed Cao Cao to retreat. It was after this that a divisional commander for the Sun-Liu forces saw that Cao Cao had chained all of his ships together.

The divisional commander came up with a risky plan. He prepared a squadron of capital ships and filled them with flammable materials, kindling, fatty oil and dry reeds. He then told Cao Cao he was planning on surrendering and sent the ships toward Cao Cao. Once the men reached the midway point they set the ships on fire and escaped on small boats. The burning ships were carried by the winds to Cao Cao’s fleet and set the ships ablaze. An armed force then capitalized on the situation and Cao Cao’s forces were completely defeated.