How America Gave Rock 'n' Roll to the World 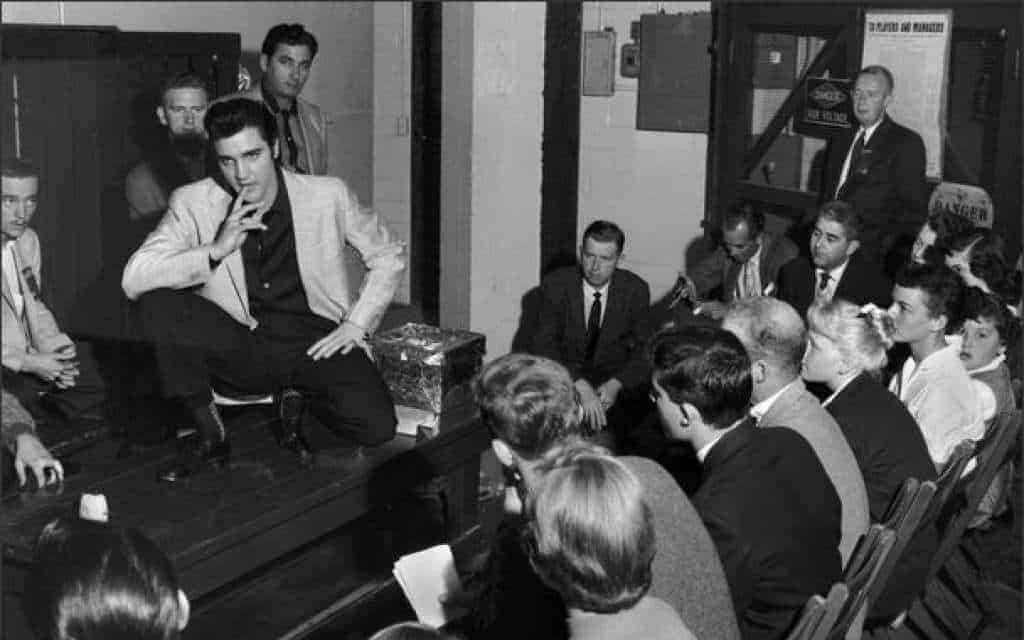 How America Gave Rock ‘n’ Roll to the World

22. The early Beatles were modeled after Buddy Holly on stage

With the exception of hairstyles, the Beatles appeared to American audiences as Buddy Holly had to British the preceding decade; guitars, bass, and drums, layered vocals, and a bow to the audience following a number. Holly had by then been dead five years, and though his records were still receiving airplay, his visual memory had faded. But not to the British acts, which had imitated him faithfully during their development. When Paul McCartney sang Long Tall Sally it was in a voice taught to him by its composer, Little Richard, during a tour in England in which the Beatles had shared the bill with the rock and roll pioneer.

Little Richard too had been largely forgotten in the United States by the important teen audience, having switched to gospel music following a religious experience in the late 1950s. He had returned to rock and roll in the early 1960s in Britain (when he toured with the Beatles) but his career had not recovered in the United States by the time the Beatles arrived. American teens heard his music, through the voice of Paul McCartney, without knowing that McCartney was imitating the man who had brought the song to Britain from America just a few years earlier.

The success of the Beatles brought several British bands to America, with American record companies competing for the rights to market their records. A review of the track listings for the albums the bands released in America, and supported by playing the songs on their tours, reveals the extent of the influence of American rhythm and blues, rock and roll, and blues on the British. American folk music had influenced them too, carried to Britain by the early stars. Surprisingly, the influence of Elvis Presley was limited, Elvis was not a songwriter of note, and he never performed in Britain. But a guitar player for Elvis (and others), Scottie Moore, was a major influence on the British.

The Animals came to America in October, 1964, through the portal used by many British bands, The Ed Sullivan Show, after which they performed in several theaters around New York City. Their repertoire was almost entirely cover versions of American rhythm and blues songs. The American song factory known as the Brill Building provided a large portion of their recorded catalog. American influence continued even as the British Invasion was at its peak, with several bands picking up new sounds as they absorbed American radio and culture.

Rolling Stones front man and singer Mick Jagger adapted the stage presence and dance moves of American performer James Brown, having already begun using the inflections of black bluesmen in his band’s cover versions of their songs. John Lennon absorbed the influences of Bob Dylan, both in his lyrics and in his guitar playing on some of his own songs. The Motown sound emerged during 1964; both the Temptations and the Four Tops reached the top twenty that year, as did the Supremes. The Rolling Stones recorded at Chess Studios in Chicago. Three of the five songs recorded there were by American artists, including Chuck Berry’s Around and Around.

The British invasion changed radio playlists, and the American rock and roll from which it had sprung all but vanished from the airwaves. Some British bands even came to the United States sporting American names, such as the Nashville Teens, who had a hit with Tobacco Road in 1964. The song itself was an American blues song about life in North Carolina. The British Invasion was over for the most part in early 1967, and other new genres spun off from the rock and pop music it left behind, with the British bands continuing to influence those in America, and vice versa. It was an era which would never have happened had it not been for the reception of American rock and roll in Great Britain a decade earlier.

“Cunard Yanks: the sailors who taught Britain how to rock and roll”. Tim Jonze, The Guardian. July 1, 2015

“The British Invasion: From the Beatles to the Stones, the Sixties Belonged to Britain”. Parke Puterbaugh, Rolling Stone. July 14, 1988

“Mods, Rockers, and the Music of the British Invasion”. James E. Perone. 2009