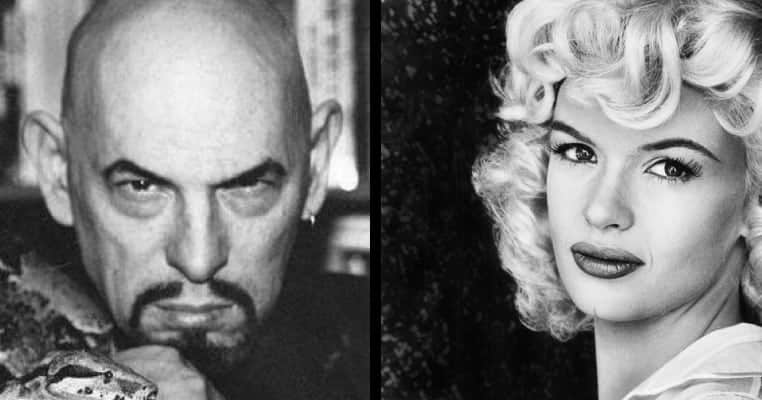 The history books are full of odd-couple friendships, but few are more head-scratch-inducing than the unlikely pairing of 1950s blonde bombshell and sex symbol Jayne Mansfield and the shadowy, cult-leader-like founder of the Church of Satan, Anton LaVey. Mansfield was as famous, if not more so, for her publicity stunts, often involving nudity, than she was for her film work. LaVey was best known for his weekly theatrical, macabre “Satanic” performances at his San Francisco home. It was one of these powerful performances that drew Mansfield to his house, hoping to drum up some headlines for herself, that led to a strong and possibly romantic bond between the two that lasted until her untimely death from a car accident in 1967.

The meeting which launched the friendship occurred in 1966 after Mansfield attended the San Francisco International Film Festival. She had heard of LaVey and his newfound Church of Satan and visited his home to meet him in the hopes of snagging some headlines. Ever the showman, LaVey obliged and awarded Mansfield with the title “High Priestess of San Francisco’s Church of Satan.” Mansfield’s instinct for publicity was, as usual, quite accurate and the media devoured stories of Mansfield as a Satanist and lover of LaVey. LaVey’s life was full of many tales that weren’t entirely honest, but his daughter, Karla, claimed that Mansfield was, in fact, a practicing Satanist who had a romantic relationship with her father.

Far from any Satanic origin, Jayne Mansfield was born plain Vera Jane Palmer in Pennsylvania in 1933. Her parents were German and English, and both came from relatively wealthy families. Her father was a practicing attorney up until his early death, at which point her mother remarried and moved the family to Texas. Despite her later reputation as a “dumb blonde” archetype, Mansfield was a good student, studying several languages and receiving at least Bs in all of her classes, including mathematics. Though she married at 17 and had her first child only six months later, Mansfield graduated high school and enrolled in college with her first husband, Paul Mansfield.

Mansfield studied acting at several universities while also working countless odd jobs including nude art model, door-to-door book sales, receptionist, selling popcorn and candy at movie theaters, teaching dance, photography, and modeling. During this period, she also met and studied with Baruch Lumet, father of director Sidney Lumet, who would eventually get Mansfield her first screen test with a major Hollywood studio. Rip Torn was another of Lumet’s favored “kids” and worked closely with Mansfield in studying acting.

After Mansfield and her husband settled in California, she embarked on her acting career in earnest. Her first paid gig was a commercial for General Electric that featured women lounging around a pool. Soon after, she auditioned with both Warner Brothers and Paramount Pictures but failed to impress either studio. Her next paid role was in a CBS series Lux Video Theatre for which she had a few lines and received the equivalent of $3,000 today. Her big break didn’t come until 1955 when she was the Playmate of the Month for Hugh Hefner’s new men’s magazine Playboy.

Mansfield’s appearance in Playboy mainly launched her profession, much as appearances in the magazine had done for the careers of fellow 50s sex symbols Marilyn Monroe, Bettie Paige, and Anita Ekberg. Combined with the interest in her Playboy appearance was a fascination with her publicity antics. From the start of her career, Mansfield ravenously sought out publicity and kept track of the number of lines of print she appeared in. Wardrobe malfunctions were a common tactic of creating headlines for the budding star, with “accidentally” exposing her large breasts being one of her preferred tricks.

Her publicity-seeking behavior, along with her notable hourglass figure, led 20th Century Fox to sign Mansfield to a six-year contract in 1956. The studio viewed her as their blonde bombshell insurance against the increasingly tricky behavior of their resident bombshell, the troubled Marilyn Monroe. Mansfield was often referred to as the “working man’s Monroe,” a rather uncharitable comparison. Mansfield had her first lead film role that same year, in the critically and financially successful The Girl Can’t Help It.

The next year saw Mansfield star in an adaptation of John Steinbeck’s The Wayward Bus, for which she won a Golden Globe for New Star of the Year. This is widely considered the best acting performance of her short career, as her image hampered her as a real bombshell, but with limited acting range. The studio continued to compare Mansfield to Monroe, now in an attempt to goad Monroe into honoring the remainder of her contract and act in more films.

After 1959, the demand for blonde bombshells dropped dramatically. Fashion and film began to turn to waifish, mod women like Twiggy and Mia Farrow. Large-breasted bombshells were viewed as a relic of the 50s. Mansfield had few notable film roles after 1959, except the exploitation film Promises, Promises!, in which she was the first leading actress to appear nude. The film was a box office success despite the controversy it garnered, including being banned from showing in Cleveland, Ohio.

With the decreasing availability of film roles and Mansfield’s ongoing desire for publicity, it is perhaps not that surprising that she reached out to the unlikely figure of Anton LaVey as a means to garner the attention she so desperately craved. The public was beginning to tire of her planned wardrobe malfunctions and sexually-charged antics; thus associating with the Church of Satan was undoubtedly a different route to publicity. Anton LaVey was becoming well known in the mid-60s for his writings and church, with notable San Francisco residents attending his weekly Satanic religious performances. After Mansfield attended one of his weekly rituals, which garnered a great deal of press attention, she kept in contact with LaVey. After her son, Zoltan, was injured by a lion at a theme park, LaVey famously performed a mountaintop ritual to aid in his recovery. The boy made a recovery swiftly, which Mansfield publicly credited to LaVey’s Satanism. Ever the consummate celebrity, Mansfield famously invited LaVey and her personal photographer to her pink mansion to increase the public perception of their close relationship further. While they may have indeed been friends, the two also used each other very wisely to enhance their fame.

The life of Howard Stanton Levey, who later styled himself Anton LaVey, is that of a somewhat regular man who claimed many terrific feats to make his legacy grander. Those who knew LaVey stated he was born a natural showman. Born in 1930 to an American father from Chicago and a mother who was the daughter of Russian immigrants, LaVey led a normal life in California. He had a keen interest in music, which his parents encouraged and supported. LaVey was particularly drawn to keyboards and became a well-known local musician on the nightclub circuit.

Many of the self-proclaimed details of LaVey’s life cannot be verified, and many have been openly disputed. LaVey claimed to have worked for a carnival as a young man, which he claimed formed his distaste towards religion, but no evidence exists that a carnival ever employed him. He also insisted he had an affair with Marilyn Monroe while working as an organist at a burlesque house, a claim which is disputed by both Monroe’s inner circle and the manager of the theatre he claimed to work at.

While LaVey long had an interest in the occult and paranormal, there is no evidence to suggest he was employed as a psychic medium by the San Francisco Police Department, as he claimed in his biography. Instead, it appears that LaVey was merely a competent local musician who had aspirations for more magnificent showmanship and found them through his “Satanic” Friday night performances at his home. Due to friendships with writers from Weird Tales, including Fritz Leiber and Clark Ashton Smith, his parties gained some renown and drew other illustrious attendees.

LaVey began to parlay his well-attended parties into greater fame with the establishment of his own religion. According to LaVey, in 1966 he ritualistically shaved his head and declared it Year 1, or Anno Satanas, the first year of the Age of Satan. According to friends, LaVey simply had lost a bet that required him to shave his head, but the clever showman managed to turn even losing a bet into a ritualistic part of his budding religion. As interest in his newfound religion slowly grew, LaVey must surely have seized upon the opportunity for publicity afforded him by Jayne Mansfield’s visit to one of his weekly Friday Satanic sermons. The media attention on Mansfield’s latest publicity stunt also helped catapult LaVey and his religion to the forefront of national news. His subsequent Satanic baptism of his own three-year-old daughter helped capture even more headlines.

When Mansfield’s son, Zoltan, was savaged by a lion at a theme park, LaVey took the opportunity to create a media firestorm by going to a remote mountain peak to cast a Satanic spell for his recovery. When the boy recovered, Mansfield publicly credited her friend and public relations conspirator with his good health. Ever the showman, LaVey even capitalized upon his friend Mansfield’s death. He expressed great remorse for the curse he supposedly cast upon her boyfriend, Sam Brody, which he claimed unintentionally led to Mansfield’s death as well. After her funeral, LaVey held a memorial service celebrating her life at his home, by this time known as the Black House, or the home of the Church of Satan. We may never understand the true nature of the relationship between LaVey and Mansfield, as both desperately sought publicity and LaVey, in particular, created his own legend out of fiction when he saw fit.

“The Hollywood blonde and the Satanist”, FORREST HANSON, The Daily Mail