Ancient Drunks: The 8 Biggest Drinkers of the Greco-Roman World 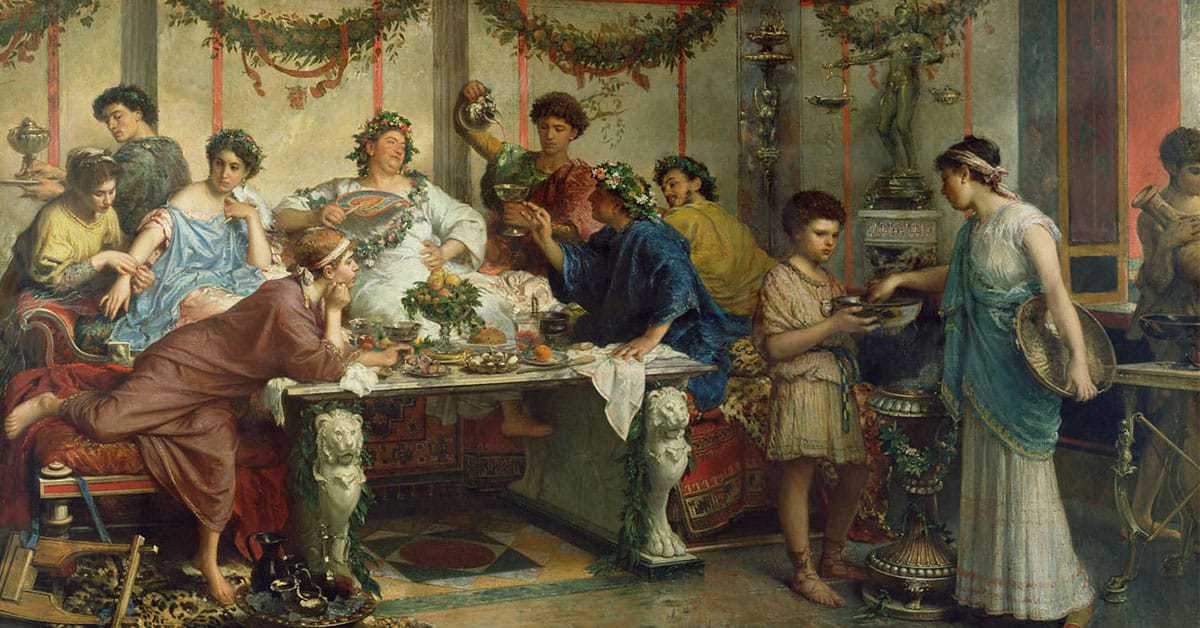 Ancient Drunks: The 8 Biggest Drinkers of the Greco-Roman World

While in the Greek world, certain drinking practices—binging heavily on an empty stomach, for example—can be traced as far back as Homer’s “Iliad” and “Odyssey”, in the Roman world excessive practices of this kind only seem to have come during the reign of Emperor Tiberius. It’s fitting that they did so at this time though, especially given what the emperor’s biographer Suetonius refers to as Tiberius’s lifelong “excessive love of wine”.

When he was a young recruit in the army he was given the nickname Biberius Caldius Mero—in Latin this translates roughly as “drinker of hot unmixed wine”—in place of his real name, Tiberius Claudius Nero. Nor did becoming emperor do anything to lessen his susceptibility to the sauce; and while consumption in the capita was bad enough, when he took up residence on the island of Capri it spiraled out of control. On Capri, he established a horrendously heavy drinking culture; one that was a marathon for those who could handle their drink, an ordeal for those who could not.

He kept company with others who drank to excess, and even dished out political promotions to those who proved themselves able to keep up. We’re told that soon after his accession, and during a time in which he should have been setting the standard for public morals, he spent an entire 36-hour period getting wrecked with two close friends, Pomponius Flaccus and Lucius Piso. After getting some rest, the two men woke up (presumably with splitting hangovers) to find they had been appointed governor of Syria and urban prefect respectively. On another occasion, an obscure political candidate beat a nobleman in securing political office because he had successfully seen out the emperor’s challenge of downing an entire amphora of wine in one go.

Being inebriated made Tiberius no less cruel; in fact, he managed to combine the two in coming up with a sadistic torture method. On Capri he would allegedly trick people into drinking litres of wine before having their genitals tightly bound with cords and wires; thus preventing them from being able to relieve themselves and leaving them in extreme agony. Even when Tiberius fell agonizingly ill in the final weeks of his reign, he went on banqueting and feasting; perhaps in an effort to conceal the extent of his illness and, by doing so, hasten his death at the hands of a successor.

If there’s one emperor who defines degeneracy and gives us the image we have today of the debauched and luxurious lives of the Roman emperors, that emperor is Caligula. Ascending to power after the death of Tiberius, he crossed every boundary of what was expected of both a Roman and an emperor. He ruthlessly murdered anybody he saw as a threat, as well as those who simply annoyed him; buggered (and was buggered by) almost anything that moved, and even demanded to be worshipped as a god, complete with his own temple and priesthood. He ultimately reaped what he sowed, however, assassinated by his own praetorian guard on his way out of a theatre in 39 AD.

Alcoholism, however, is not one of the vices he’s well known for; that is unless you start digging around the ancient literature. Firstly, the description of Caligula’s physical appearance we get from his biographer Suetonius closely mirrors that of the stereotypical alcoholic described by Pliny the Elder. He was apparently pallid and weak, wracked with insomnia and hallucinations. His behavior was also erratic and forgetful; on several occasions sending for people he had just put to death.

The Jewish historians Josephus and Philo described Caligula as a gluttonous drinker, but they had a personal, religious axe to grind given that the emperor had tried to install a statue of himself in Jerusalem’s Temple in 40 AD. But while trying to thread alcoholism through his later life might be a thankless task, we do have one particular anecdote that reveals the bibulous excesses to which he would go.

In 37 AD Caligula ordered a bridge of ships to be built across the bay at Baiae, near Naples. The reasons for him doing so are unclear: some speculated that he wanted negate a prophecy that he would sooner ride horses over water than be emperor; others that he wanted to emulate the Persian king Xerxes’s bridging of the Hellespont in 480 BC.

What is clear is that he spent the day riding up and down the bridge on horseback before leading a military procession along it wearing the breastplate of Alexander the Great, another notorious drinker. As night fell, the procession turned from a military one into a Bacchic one, and several of Caligula’s drunken companions fell into the sea, where—held under by oars under the orders of the hysterical emperor—they drowned.

A stuttering, limping, and often dribbling aristocrat (we think he may have suffered from cerebral palsy), in the poisonous, image-obsessed environment of the imperial court, Claudius was forced to wear his flaws on his sleeve. He’d been a prominent public figure during the reign of his nephew, Caligula. But prominence didn’t equate to respect, and Claudius often found himself the butt of jokes. Arriving late for banquets, he would be made to circle the room several times before being offered a seat. He would also routinely fall asleep after gorging himself and food and wine, only for people to throw olive stones at him and put slippers on his hands (so that waking up he would rub his face with them).

When it came to gluttony, nothing much changed after the Praetorian Guard declared Claudius their emperor in 41 AD after Caligula’s execution. He would never leave a banquet without being unable to move through the amount of food and wine he’d consumed and would carry on his alcoholic/narcoleptic tendencies of passing out post-feasting. After gorging himself half to death he would fall asleep on his back with his mouth wide open, and could only be induced to drink after a white feather had been waved down his throat and he’d been made to vomit.

Like Mark Antony, Claudius also gives us an example of an ancient figure harnessing the anesthetizing effects of alcohol. In 48 AD, Claudius’s wife Messalina publically married her senatorial lover Gaius Silius while the emperor was away on business. News of what had happened quickly spread and Claudius rushed back to the capital to nip this coup d’état in the bud. Silius was put immediately to death but Messalina was merely imprisoned. She implored her guards to let he see her (ex-) husband but, taking power into their own hands, Claudius’s advisors had Messalina summarily executed. The emperor’s only response: to ask for his wine goblet to be refilled.

Although Claudius suffered from poor health as a young and middle-aged man, it markedly improved when he became emperor. We are told, however, that he suffered from a persistent stomach complaint—one so bad it even drove him to consider suicide—which some suggest came from regular heavy drinking. Claudius died in 54 AD, at the age of 54. But it wasn’t the drink that got him in the end but the food: poisoned mushrooms specifically, surreptitiously administered by his wife, Agrippina, and her spoiled bratty son, Nero.

It’s no coincidence that one of the most important surviving ancient texts about the evils of alcohol comes from the Age of Nero. It was written by Seneca the Younger, a stoic philosopher who in his later years was hired as tutor to the young emperor, and outlined the belief that excessive drinking meant a weakness of character. Given Seneca’s protégée, it’s easy to see where he might have got his inspiration.

As a teenager, Nero would get tanked up before roaming Rome’s streets, pillaging taverns and looking for people with whom to pick impossibly one-sided fights. One time, he started on a senator whose wife he’d once molested, and in his fury the aggrieved husband gave as good as he got, inflicting some injuries on Nero. After that Nero would never again roam the streets without an escort; after that, the aggrieved husband would never again draw breath.

As emperor, Nero participated in many less violent activities which, for a good, upstanding Roman, would have been considered abhorrent (the modern equivalent might be Queen Elizabeth pole dancing, or Putin riding around shirtless on horseback). Singing was one of them, and although Nero abstained from foods that could prove harmful to his voice, we’re told that he did need a bit of Dutch courage before performing at the theatre.

Chariot racing was another, and despite the fact that the Romans had their own drink-driving laws forbidding anybody to be intoxicated while in control of a chariot, it seems Nero may have broken this one, especially considering the fact that when he raced in the Olympics he fell off. He was still crowned winner of course. But as the most powerful man in the world, who in their right mind would disqualify him?

The moment we see Nero at his most dependent on alcohol comes from immediately after he ordered the murder of his mother, Agrippina. As he arrived to look upon her stabbed corpse, we’re told the incestuous emperor made a series of comments about her physical attributes; some critical, some complimentary. While doing this he demanded something to drink. If this anecdote is true, we can presume he did so to numb himself against the monstrosity of what he’d done.

Any banquets he hosted would last from noon until midnight. They wouldn’t be in private either, but in the Circus Maximus or on one of his many pleasure barges on the River Tiber or at Baiae on the Campanian Coastline. And such were their size and scale (in terms of participants and expenditure) that they would attract pop-up taverns replete with aristocratic prostitutes which, when you think about it, gives us our perfect caricatural image of the excessive lifestyles of the Roman elite.

Shakespeare And Beyond – Cleopatra and Fake News: How Ancient Roman Political Needs Created A Mythic Temptress

National Geographic Channel – Who Was the Most Powerful Woman in Ancient History?

the New Inquiry – Dinner with Caligula