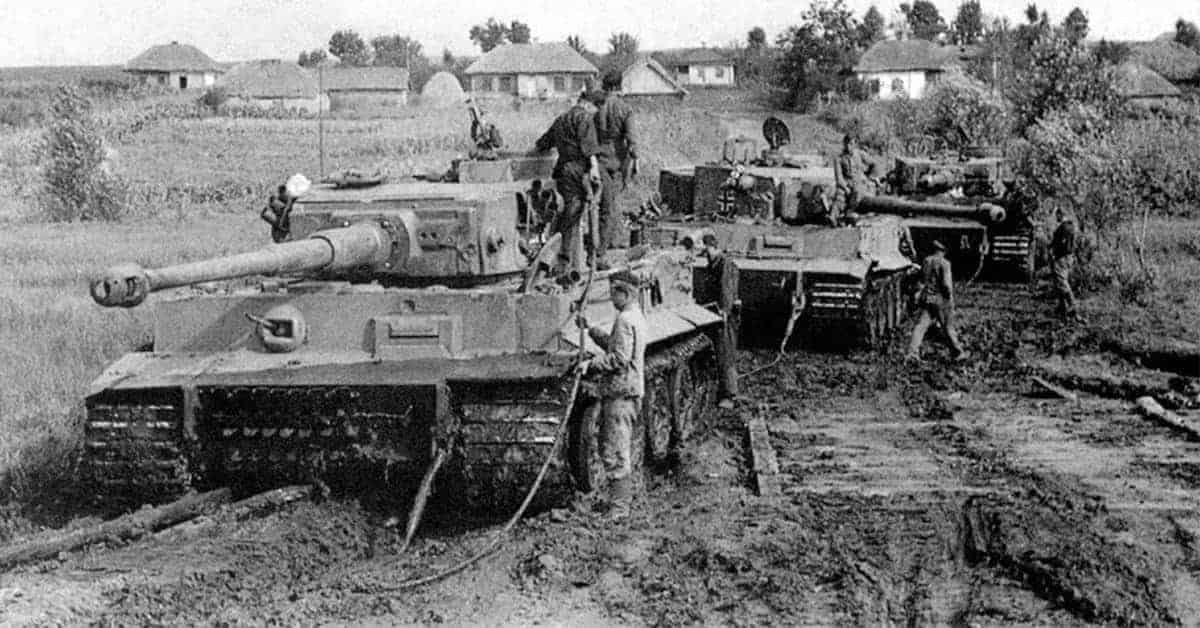 When Nazi Germany invaded the Soviet Union, a vast three-pronged offensive unfolded Army Group South was tasked with capturing Kiev; Group Center’s objective was the destruction of Soviet armies and occupation of Smolensk; Group North’s strategic goal was the seizure of Leningrad. Caught offguard, the Soviet’s mounted a desperate defense against each of the German Armies, and the single KV tank that slowed Army Group North for two days was a small part of the fighting known as the Battle of Raseiniai.

The 6th Panzer was a light mechanized unit, comprised of two motorized infantry regiments, a Panzer reconnaissance battalion, a Panzer regiment, two companies of Panzerjägers (tank-hunters), two motorcycle battalions, two artillery battalions, an anti-aircraft battery, and a company of Panzer engineers. This unit embodied blitzkrieg. Fast, well-armed, and well-trained, the 6th went through Lithuania like a thunderbolt; blazing the way for the larger army behind them. Their advance, however, came to a standstill when reports that the enemy had cut between the 6th and the main body.

Locals later claimed a single tank had arrived on the night of the 23rd, driven to the crossroads outside of Raseiniai, and simply stopped. The tank may have run out of fuel, or broke down. Whatever the reason, this was a tank that had no intention of moving… or falling to the Germans quietly.

The convoy fled and reported sighting a lone KV tank at the crossroads outside of the Raseiniai. The 6th anticipated a Soviet counter-attack and suspected this was its beginning. A second convoy, unaware of the KV’s presence, approached the crossroads. The KV unleashed an intense barrage and destroyed all twelve trucks. The German commander, Generaloberst Erhard Raus, realized this was not a massive counter-attack, rather it was a single tank… directly in the middle of his supply lines. Worse, the tank continued to fire on German positions in Raseiniai. Raus needed to remove the tank quickly, and ordered anti-tank crews to attack. Panzerjägers positioned a battery of 50mm anti-tank guns and fired. The tank sat immobile, silent. Suddenly, the turret turned and annihilated the anti-tank battery.

The Germans tried attacking with a distant 105mm Howitzer but missed. They tried moving an 88mm anti-aircraft (AA) turret into range. The KV spotted the gun immediately and destroyed it. Soldiers tried to close in and plant explosives under the cover of night; they were driven back by machine-gun fire, but managed to damage one of the tank’s treads. The following day, Raus ordered several Panzer’s to distract the KV, while soldiers moved another (camouflaged this time) 88mm anti-aircraft gun into range. Fire from the AA gun quieted the KV, and German soldiers closed in on the massive tank. The turret turned suddenly, and a German soldier managed to fling a grenade inside the tank before fleeing, killing the tank’s crew. Six dead soldiers had manned the lone KV, and the Germans paused long enough to bury their foe out of respect their stand merited.

Promoted to Lieutenant General and assigned command of the newly formed Deutsches Afrika Korps in February of 1941, Field Marshal Erwin Rommel’s first year in North Africa wasn’t a smashing success. Both he and his British opponents shared a few victories and failures, and the year ended with both sides controlling relatively unchanged positions. 1942 would not follow the same path. On January 5th, the Afrika Korps received desperately needed reinforcements and supplies, and Rommel launched an assault two weeks later. Given the tenuousness of his supply chain, Rommel needed the port city of Tobruk, a prize he’d tried, and failed, to capture throughout 1941.

Rommel’s attack surprised the Allies, who lost over 110 tanks and control of the cities Benghazi and Timimi. Caught by surprise by the Afrika Korps, the Allies lost over 110 tanks and other heavy equipment. The Axis forces retook Benghazi on 29 January and Timimi on 3 February, and General Sir Claude Auchinleck, commander of the allied army, established a defensive line to protect Tobruk near the Gazala. Rommel, however, had no intention of attacking their prepared defenses. Unbeknownst to the Allies, the communication codes used by the US State Department in Egypt was compromised, and until June of 1942, Rommel had detailed knowledge of his enemy’s deployment and military strength.

The information Rommel received was critical. 200 of the new Grant tanks, superior to anything under Rommel’s command, had reinforced the British, and the Allies outnumbered the Germans. The British had 110,000 infantry, 843 tanks, and 604 aircraft, whereas Rommel’s forces included 90,000 infantry, 560 tanks, and 542 aircraft. Time was not on Rommel’s side. He needed to slow the tide of reinforcements to the Allied armies and shorten his supply lines. Rommel had to capture Tobruk as soon as possible.

Following Luftwaffe victories near Malta in April 1942, long awaited supplies finally reached the Afrika Korps, and Rommel began preparing an offensive in May. The British were planning to attack, and Rommel had no intention of surrendering the initiative. Thus, in late May, Rommel attacked first at Gazala. The attack, however, was not what it seemed. Infantry with a small contingent of armor assaulted the fortifications, but only as a feint. The bulk of Rommel’s armor and motorized forces swept around the British’s left flank under the cover of darkness and attacked the allies from behind. Both sides took heavy losses. Packs of Panzers had to swarm the Grant tanks, and their superior armor, individually.

The mobile forces fought for two days. Rommel, however, ran low on fuel, and shifted to a defensive position that became known as the “Cauldron.” He used the British minefields to the west to cover his flank, and mangled the Allied forces that closed in to attack. Rommel’s infantry cleared a path through the minefield, and fuel was rushed through. Rommel counterattacked through the minefield’s path immediately, achieving complete and total surprise.

The British 150th Brigade surrendered on June 1. Allied forces holding the Free French strongpoint at Bir Hakeim fled on the 10th, and Rommel swung north and raced to the sea. The bulk of British forces remained in Gazala, but Rommel’s advance to the sea separated the Allies from the city they were protecting. Rommel ignored the fortified British at Gazala, and swung east, capturing Tobruk in a single day, and accepting the surrender of 32,000 defenders, a desperately needed port, and a massive quantity of supplies.

Fighting multi-front wars is a difficult endeavor for any nation, and even the most powerful militaries try to avoid it. This was especially true on October 6, 1973, during Yom Kippur, when the Arab Coalition, led by Egypt and Syria, launched a surprise attack at Israel from the north and south. Caught completely unawares, Israeli defense forces scrambled to reinforce both fronts, and the Golan Heights was particularly light on defenders.

The Syrian’s smashed into the Golan Heights, which was defended on the north side by the 7th Israeli Armored Brigade and the 188th Barak Brigade to the south, with an overwhelmingly powerful armored force. Roughly 1,400 tanks swarmed into the region, and the T-62, the Soviet Union’s latest armored unit, made up over one-quarter of the Syrian’s armor. Backed by over 1,000 pieces of artillery, air support, and the older T-54 and T-55 tanks, the T-62 thoroughly outclassed the Israeli armor. Equipped with night vision and 115mm main guns, the T-62 should have annihilated the Israeli’s World War II era British-made Centurions and US-made “Super” Shermans. Combat, however, is anything but predictable.

The 7th Armored Brigade’s stand in the north is a legendary tale worth telling, but perhaps the most interesting story is the Barak Brigade’s lesser-known defense of the south. Both units had the same orders; hold the line until the reserves scrambled. The Barak Brigade, however, had far less tanks than the 7th, and when the Syrian’s 46th Armored Brigade pressed into Southern Golan, the Israeli defenders were outnumbered by 600 to 12. The Barak Brigade called for air support, but Syrian air defenses were among the thickest in the world, and they’d invested heavily in modern Soviet systems. They devastated Israeli air forces, forcing the Barak Brigade to fight on its own.

This is when things get… interesting. When Egypt and Syria launched their attack, twenty-one-year-old Lieutenant Greengold was on leave, preparing to take a course for company commanders. Comprehending the danger immediately, and currently unassigned to a specific unit, Greengold hitchhiked to a command center in the Golan Heights, where he assumed command of two recently repaired Centurion tanks, and assembled their crews on the fly. Syrian tanks broke through the line toward the northwest, and Lieutenant Greengold’s scratch-built unit raced to stop them. Six destroyed T-55s later, Greengold sent his damaged tank back for repairs, assumed command of the remaining unit, and moved to counter the Syrian’s 452nd Tank Battalion. Night, however, was falling, and Greengold knew the enemy’s night-vision systems gave them a dangerous edge.

Constant movement, Greengold decided, was the only option. If he couldn’t hide in the darkness, he could make the Syrian’s believe their opposition was stronger than it was. Driving like a madman in a tank (because he was), Greengold destroyed at least ten enemy armored vehicles, and the Syrian’s retreated believing they faced a far more powerful force than they actually did.

The Past – Prokhorovka: The Greatest Tank Battle In History?

National WWII Museum – Drive to Nowhere: The Myth of the Afrika Korps, 1941-43

The New York Times – A Brief History of the Golan Heights, Claimed by Israel and Syria

Al Jazeera – The October Arab-Israeli War Of 1973: What Happened?