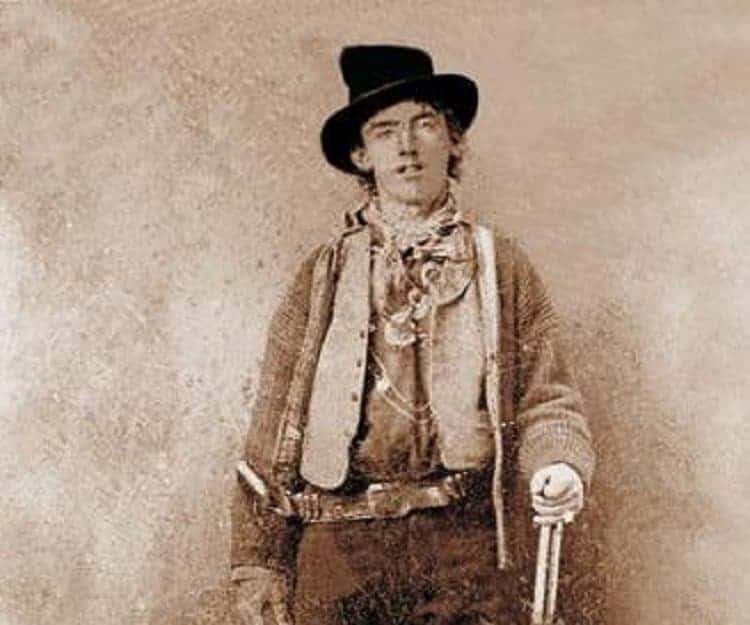 Obviously, the most well-known Old West figure in history, Bill the Kid’s life has been shrouded in rumor and mythology since he was killed in 1881 at the young age of 21. Scant information is known about his early life. The man who became Billy the Kid was born Henry McCarty to an Irish immigrant mother in New York City in 1859. His mother, Catherine, moved Henry and his brother Joseph to Indianapolis when the boys were still young.

Catherine remarried in Indiana and the family relocated to Wichita, Kansas, and then finally to New Mexico, where Catherine died in 1874 of tuberculosis. Henry McCarty was now 15-years-old. It was not long before he embarked on a life of crime that would make him an outlaw and a hero throughout the world. McCarty had several brushes with the law from 1875 until 1877. He became a thief, stealing pistols, clothing, and food. His stepfather finally threw him out of the house, and McCarty made his way to the Arizona territory.

McCarty committed his first known murder in August 1877, a month before his 18th birthday. A disagreement during a poker game and a subsequent fight led to McCarty shooting and killing a man named Francis “Windy” Cahill in Arizona. McCarty fled Arizona and returned to New Mexico and started working for a rancher named John Tunstall. It was also during this time that Henry McCarty started to go by the name William H. Bonney.

Unbeknownst to Billy, he soon found himself in the middle of a battle between cattle barons in New Mexico known as the Lincoln County War after his new boss John Tunstall was murdered by a rival faction. Billy and his fellow cowboys vowed to avenge the death of their boss and caretaker. It was during the Lincoln County War that William H. Bonney became known in the press as the notorious “Billy the Kid.” Billy was handy with a pistol, and he killed several men during the conflict. He became a famous outlaw, and escaped from custody not once, but twice, further adding to his legend. Billy’s boisterous personality endeared him to friends, and his ability to speak Spanish allowed him to hide out in various villages throughout New Mexico while he was on the run from the law.

Billy was eventually hunted down and killed in Fort Sumner, New Mexico in July 1881 by Sheriff Pat Garrett. Since then, conspiracy theorists have speculated that Billy the Kid was not actually killed that night, and several men later came forward proclaiming they were indeed the infamous outlaw.

You May Interested: ‘Buckskin’ Leslie Kills ‘Billy the Kid’ Claiborne In A Gunfight.

Jim Miller didn’t earn the nickname “Killer” because of his gentle nature. He was given the moniker because he excelled at one thing and one thing only; murder. Interestingly, Miller was married to a cousin of another infamous Old West outlaw; John Wesley Hardin. Miller was born in Arkansas in 1861, but his family moved to Texas when he was still an infant. When Miller was only 8-years-old, his grandparents were found murdered. The young boy was arrested but was not prosecuted for the killings.

Miller’s troubled life did not improve as he aged. In 1884, at the age of 23, Miller shot and killed his brother-in-law as he lay sleeping on his porch. He was arrested, tried, and sentenced to life in prison, but this was overturned on a small technicality. Jim Miller was once again free to roam the Lone Star State.

Miller then went on to become a deputy sheriff near the Texas-Mexico border. He quickly gained notoriety for killing Mexicans, many times claiming they were trying to escape over the border. Miller had a running feud with a fellow sheriff named Bud Frazer that found him on the wrong end of a gun in 1894. Frazer shot Miller several times in the chest and assumed he had killed his rival. It was revealed later that Miller was wearing a steel plate under his large coat, saving his life. The two had several more skirmishes, until Miller finally ended the feud on September 13, 1896, shooting and killing Frazer with a shotgun in a saloon.

Miller gained further notoriety by killing Hoe Earp, brother of the famous lawman Wyatt Earp. Miller then found work as a Texas Ranger, working at the outpost in Memphis. He returned to Texas in 1900, and he became a professional assassin, charging $150 for each murder he committed. Throughout the first decade of the twentieth century, Miller killed many men. Sheriff Pat Garrett, the man who had killed Billy the Kid, was gunned down in 1908 and “Killer Miller” was believed to be the culprit.

In 1909, Miller was hired for a contract killing in Oklahoma. The target was a former U.S. Marshal named Gus Bobbitt. Miller killed Bobbitt, but the man was able to identify Miller as his assassin before he expired. Eyewitnesses also placed Miller at the scene of the crime. Miller was arrested in Texas and sent back to Oklahoma to stand trial. On April 19, 1909, an angry mob broke into the jail where Miller was being held and dragged him and three other men to an abandoned stable. The four men were lynched by the mob. Apparently, Miller’s final words were “Let ‘er rip” before he was hanged.