This Day In History: Billy the Kid Is Arrested For the First Time (1875) 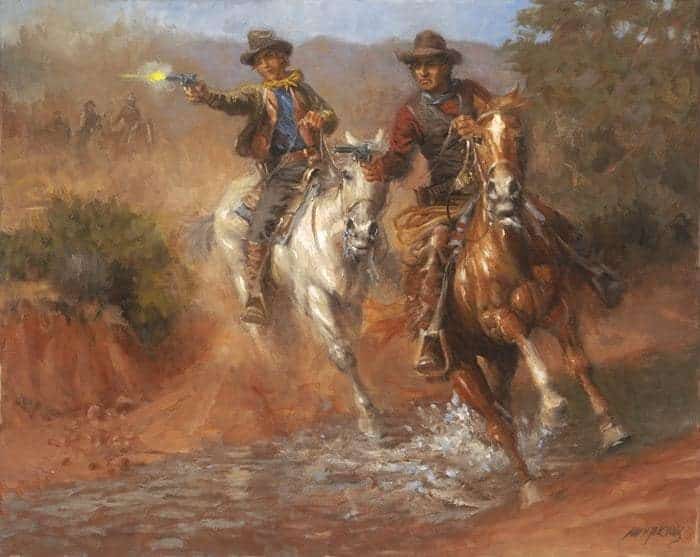 This Day In History: Billy the Kid Is Arrested For the First Time (1875)

On this day in 1875, the 15-year-old Billy the Kid begins his life of crime. His first crime was a result of a teenage prank, gone wrong. An older acquaintance of Billy had stolen a bag of clothes from a Chinese laundry as a joke. He asked Billy to hide the bag for him. The owners of the laundry reported the ‘crime’ and the sheriff’s deputy found it at Billy’s home.

The deputy thought he would teach the young man a lesson and locked him up in jail. The young man was placed in a cell and when her he discovered that he had a deep-rooted fear of enclosed spaces. It is possible that he was claustrophobic. Billy could not bear it and he had to get out and he used his small and skinny frame to escape through a chimney. From that day forward Billy would be a fugitive from the law, though he would soon be guilty of crimes far more serious than hiding a bag of stolen garments. So began the career of one of the most infamous outlaws in the Old West.

Billy the Kid was born in New York city, in one of the city’s sprawling slum. The young boy was to be known by many names and there has always been some doubt as to his paternity. It seems that he father was an Irish immigrant by the name of McCarthy. The young Billy seems to have changed his name several times and was eventually to settle on the name of William Bonney. He had a difficult childhood and he and his family moved around a lot in order to make ends meet. The family left New York for the West when Billy was still a mere boy. Eventually, the family ended up in New Mexico in Silver City. Here his mother started a boarding house. However, his mother died when he was just fourteen and he was left alone to fend for himself in the west. It seems that Billy had a hard time of it. At first, he was a hard working young man who according to his employer was very honest.

Only after his unjust arrest and imprisonment for hiding a bag of dirty laundry did the good-natured and hardworking William Bonney start down the road to becoming the outlaw Billy the Kid. After he escaped Billy became a career criminal. If Billy did not have such a fear of confined spaces he may never have been so desperate to escape. The unjust arrest and his fear of confined spaces turned a decent young man into a fugitive from the law. If it had not been for a joke with a bag of laundry, the young Willian Bonney may never have been the killer Billy the Kid.