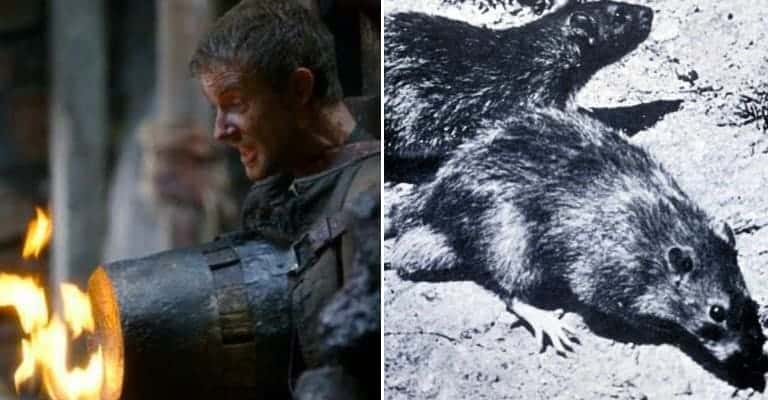 8. The Roman Candle, from which the popular firework allegedly derives its name, was originally a torture mechanism whereby Christians were set ablaze for the amusement of the Emperor Nero.

In the year 64 of the Common Era, the Great Fire of Rome devastated large parts of the imperial city. Facing blame for both causing the blaze and providing inadequate response to the inferno, which caused widespread damage to 10 of Rome’s 14 districts, Emperor Nero blamed the fiery outbreak on religious minorities including early Christians. Among the alleged cruelties bestowed upon these religious minorities was the so-called “Roman Candle”. Using humans are the base substance akin to the wax foundations of a candle, these victims were tied to stakes in the imperial garden for the amusement of the deranged Emperor.

There, the prisoners suffered being coated in pitch, oil and other flammable substances, before being set alight. The ultimately fatal fires were started from the feet, in order to prolong the suffering for those so condemned. It has been suggested, without corroboration, that these candles were used as decorations during formal parties held by Nero. Nevertheless, the ancient Roman Candles signify the first organized persecutions of Christians under the Romans. Today, the term Roman Candle refers to a type of Chinese firework that became popular in Western Europe during the Italian Renaissance.

7. Keelhauling involved dragging a sailor under the bottom of a ship, often repeatedly, as they struggled to hold their breath or survive the wounds inflicted.

Keelhauling, taking its name from the Dutch “Kielhalen meaning “to drag along the keel”, was a torturous punishment inflicted upon sailors whilst at sea. The sailor would be tied to a rope that encircled the underside of the ship, whereupon, being thrown overboard, they would be dragged underneath the ship and along the keel to emerge on the other side. Due to the physical harm suffered as a result of keelhauling, with the hull of a ship covered in barnacles, the victim would suffer immense lacerations resulting in major infections and cuts likely leading to their eventual death.

It is unclear whether keelhauling was a common practice during the ancient world. References to a similar punishment for piracy existed in the Rhodian Maritime Code dating from 700 CE, but it was not until the Early Modern Period that keelhauling entered into prominence. Several English writers during the 17th century recorded keelhauling on naval ships; however, there remains no formal note of these actions in the ship’s logs. Keelhauling was an official punishment in the Dutch Navy, although only rarely enforced due to its harsh nature. It should be noted, nevertheless, that the Dutch did not intend the practice to be fatal and allowed for respites in the torture to recover.

6. Flaying excruciatingly removed the skin of the victim, exposing the tender nerves and blood vessels beneath to the outside world, leading to immense pain and probable death by infection.

Flaying, also known as skinning, is a method of torture (and often execution) whereby the skin of the victim is gradually removed from the body in a precise fashion. Whilst flaying after death has been historically recorded, typically as a means of debasing the enemy’s honor and reserved for instances such as criminality, the predominant occurrences took place during life. Whilst small-scale flaying, although painful, is endurable, large-scale skinning inevitably leads to death. If the individual survives the initial shock and avoids critical loss of blood during the torture, then they will likely die days later due to infection.

The practice of flaying was popularized under the Neo-Assyrian Empire during the 9th century BCE, with carvings dating to the reign of Ashurnasirpal II (r. 883-859 BCE) depicting the gruesome details. Royal edicts dating from the time of Ashurnasirpal II glorify the deed, proclaiming “I have clad the pillar in the flayed skins. I let the leaders of the conquered cities be flayed, and clad the city walls with their skins”. Continuing in usage throughout Medieval Europe, most commonly as part of the execution of traitors, flaying became so popular in Imperial China that the Hongwu Emperor ordered the mass flaying of 5,000 women in 1396.

5. Premature burial forces an unfortunate individual to endure their last moments trapped beneath the earth, starved for oxygen whilst experiencing never-ending panic attacks.

Premature or live burial, as the name suggests, refers to the practice of burying an individual whilst they are still alive. Differing from immurement by both method and intent, those subjected to premature burial are interred with the purpose of execution, and, in contrast to the entombing of persons within walls, the victims die far quicker when buried. Unlike immurement, where the victims suffer for days or possibly weeks, those buried alive most commonly die long before dehydration takes effect. Instead, asphyxiation is the most common cause of death in live burials, with the individual, unless carefully buried, unable to breathe.

The earliest recorded instances of intentional live burials date from 212 BCE in China, where, during the persecution of “subversives” by the first Emperor Qin Shi Huang, approximately 460 Confucian scholars were buried alive. Centuries later, Tacitus noted Germanic tribes practicing a ritual form of capital punishment, whereby those convicted of cowardice and other shameful vices were buried face down in mud. By the reign of Queen Margaret I of Denmark (r. 1387-1412 CE), female adultery was punished with premature burial (whilst men merely got off with a quick beheading), and until 1689 Russia employed the torturous experience as punishment for the murder of a husband.

4. Crucifixion, in contrast to the common depiction of nails and blood loss, instead historically resorts to deliberately drawing out a slow and torturous death over the course of several days.

Crucifixion, an ancient method of capital punishment, is perhaps the most famous means of torture in history due to its association with the Christian narrative of Jesus. Designed to deter witnesses from repeated the offense of the condemned, crucifixions were deliberately orchestrated events. The victim was forced to carry their crossbeam to the place of public execution, weighing an estimated 100 lbs, where they would be displayed. Death often came slowly to those subjected to the practice, typically succumbing after several days to exhaustion or heart failure, whereafter their body would be left to rot as an example.

In contrast to common depiction, most crucifixions did not involve the nailing of the victim’s hands or feet to the cross. Instead, they were more frequently attached by rope in order to prolong the torture. Known to have been used as a punishment prior to the Roman civilization, appearing in ancient Persia, Macedon, and Carthage, Alexander the Great famously order the crucifixions of 2,000 survivors of the siege of Tyre in 332 BCE. As a form of punishment, crucifixion exists still today, notably in Saudi Arabia and Iran, where the most recent known occurrences of crucifixion occurred as recently as the early 2000s.

3. Lingchi – the lingering death – used hundreds of carefully placed tiny cuts to ensure the victim would survive for as long as possible until they eventually were either released or received a coup de grÃ¢ce.

Lingchi, known colloquially in the West as “death by a thousand cuts”, was a ritualistic form of torture prevalent in Imperial China. Reserved for crimes of an especially heinous nature, notably treason, mass murder, or the killing of close family members, lingchi was designed as a cruel method of causing incrementally unbearable agony for its victims. Tied to a wooden frame in a public place, small pieces of flesh would be slowly cut from the body. This practice, in addition to causing immense suffering, was supposed to represent the spiritual defilement of the individual, with their eternal soul unable to reside in one piece in future lives.

Known to have existed since the earliest days of the Qin dynasty, it became a popular practice during the reign of Emperor Tianzuo of the Liao dynasty and more so under the Song. During the Yuan dynasty (1271-1368) 100 cuts were traditional, after which the condemned was dispatched with a strike to the heart; by the time of the Ming, records indicate as many as 3,000 cuts were made over as long as three days. Eventually, under pressure from Western nations undergoing their own liberalizations of violent punishments, in 1905, as part of widespread revisions of the Chinese penal code, lingchi was formally abolished as a criminal sentence.

2. The torture of choice for the original “Dracula”, impalement suspends a tortured individual upon a pole, avoiding vital organs, where they must hang indefinitely.

As a method of both torture and execution, impalement consists of the aggressive penetration of victims by a pole. Used most commonly as a punishment for “crimes against the state”, appearing in civilizations and cultures around the world as among the harshest means of capital punishment, contrary to immediate assumptions impalement did not render a swift death. In fact, impalement, if done properly, permits the individual to survive for several days, with the longest known victim suffering for more than eight days. Multiple methods exist to accomplish the violent feat, including transversal or longitudinal impalement and bears striking similarities to bamboo torture.

The origins of the torture date to as early as ancient Babylon, with the Code of Hammurabi (c. 1772 BCE) detailing the punishment of impalement for women convicted of murdering her husband. A millennium later, the Neo-Assyrian King Sennacherib (r. 705-681 BCE) is recorded as impaling surviving Judeans after the Siege of Lachish. Ironically, in a reversal of fortunes for the Babylonians, Darius I of Persia would later impale 3,000 of their own in vengeance. Entering Europe and becoming a popular punishment for collaboration during the Thirty Years’ War, Vlad III of Wallachia’s impalement of more than 20,000 individuals earned him his immortality as “Dracula”.

1. The blood eagle – a ritualized method of torture and execution allegedly practiced by the Norse Vikings – opened up the ribs of the victim to craft their lungs into wings.

A ritualized method of torture and execution, the Viking practice of the “blood eagle” stands among the most brutal and controversial of historical tortures. Appearing just twice in Norse literature, although popularized subsequently in European mythology, it remains a matter of historic debate whether the blood eagle was a literal procedure or rather a product of allegorical exaggeration not uncommon to the Sagas. Involving the severing of the ribs from the spin using a sharp implement, the victim’s lungs are subsequently pulled through the space created and draped over their shoulders to create the illusion of wings.

Both named victims of the blood eagle – Halfdan Long-Leg and Ã†lla of Northumbria – were of royal blood, lending credence to speculation the ritual was reserved for persons of special importance. The latter depicted in the popular television series Vikings, is recorded in the “Tale of Ragnar’s Sons”, describing the English king’s torture at the hands of Ivar the Boneless. After Ã†lla’s capture at York in 867, “they caused the bloody eagle to be carved on the back of Ã†lla, and they cut away all of the ribs from the spine, and then they ripped out his lungs”. As both accounts were written many years after the events detailed, their veracity cannot be fully ascertained.

“The Spectacle of Suffering: Executions and the Evolution of Repression – from a Preindustrial Metropolis to the European Experience”, Pieter C. Spierenburg, Cambridge University Press (1984)

“The A to Z of Punishment and Torture: From Amputations to Zero Tolerance”, Irene Thompson, Book Guild Publishing (2008)

“The Life of Artaxerxes 16”, Plutarch

“Crucifixion in Antiquity: An Inquiry into the Background and Significance of the New Testament Terminology of Crucifixion”, Gunnar Samuelsson, Mohr Siebeck Publishing (2013)

“Crucifixion in the Roman World: The Use of Nails at the Time of Christ”, John C. Robison, Studia Antiqua (June 2002)