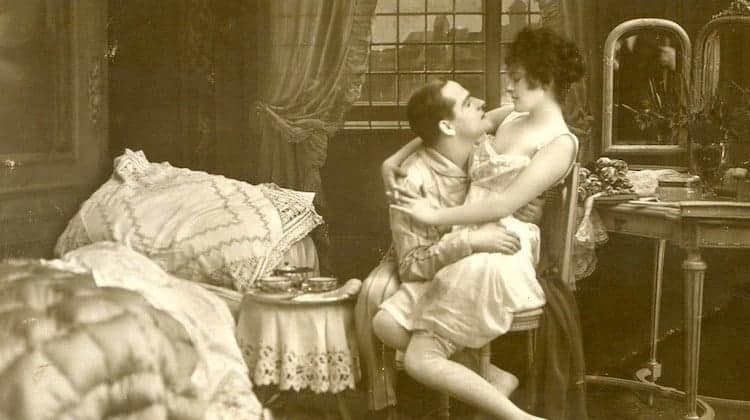 4. The Victorian era saw the emergence of the first mass-market toys, though there’s no evidence to suggest they were invented by worn-out women’s doctors

The urban legend that Victorian doctors invented vibrators as they were tired of â€˜manually’ treating women for â€˜hysteria’ is just that – a legend. Whatever Hollywood movies or popular anecdotes say, there’s no evidence to suggest that physicians suffering from cramps from stimulating stressed female patients for hours at a time were behind the emergence of mechanical and then electronic toys. However, it is certainly true that the women of the Victorian era did indeed benefit from a surge in personal toys coming onto the market – and many of these had been invented as massaging tools, many of them originally aimed at men.

As historian Dr. Kate Lister, who specializes in historical fornication practices, has shown, it didn’t take long for such innocent medical aids to be transformed into toys for pleasuring ones self. That said, however, while aids were certainly featured in Victorian-era pornography, they were almost universally old-fashioned dildos rather than vibrators. Moreover, outside of erotica, orgasms were seen to be potentially dangerous for women. While they might help with conception, as a rule, they were frowned upon and regarded as a potential cause of hysteria rather than a cure for it. So, while sex toys were common, there’s no evidence that they were encouraged by medical professionals!

3. The final few decades of the Victorian era saw the emergence of sexology as a serious subject, with new genders and sexualities identified

Far from ignoring matters of intimacy, towards the end of the Victorian era, such subjects were becoming the focus of academic scholarship and serious debate. To some degree, such debates served to reinforce traditional, patriarchal concepts of copulation. For instance, the emergence of Darwinism supported the belief that men had â€˜natural’ urges and were far more randy than women. Biologists and anthropologists used the latest scientific breakthroughs to support the idea that men were â€˜programmed’ to be promiscuous – and, as such, a good, understanding wife should turn a blind eye to her husband’s liaisons with prostitutes.

On the other hand, however, this much discussion about reproductive habits was positively progressive. For example, the sexologists – a profession that emerged around the 1880s – Richard von Kraft-Ebing and Havelock Ellis created the terms “heterosexuality” and “homosexuality” as well as “nymphomaniac”. They started analyzing personal intimate preference and started to realize that there was a â€˜scale’ rather than simply assuming sexuality to be a binary matter, though they also argued that there were both â€˜normal’ and â€˜perverse’ tastes and practices. Moreover, Ellis theorized that there was a â€˜third sex’ between male and female.

2. Victorians weren’t easily-shocked or overly-prudish – in fact, we have 20th century writers to blame for this unfair stereotype

According to one popular myth, the Victorians were so repressed that table legs were often covered up to prevent men from becoming around by the sight of curves and notches. As we’ve seen, this was far from the case. So, where did this unfair reputation for prudishness come from? According to some scholars, it most likely emerged in the opening decades of the 20th century. The so-called authors and poets of the Modernist movement, most notably Lytton Strachey and Virginia Woolf, were eager to present themselves as forward-thinking, liberated and progressive – and so, naturally, they presented the generation that came before them as the exact opposite of this.

It was only really in the 1970s that this idea of the Victorians being repressed started to be questioned and effectively challenged. The French philosopher, Michel Foucault, published The History of Sexuality in 1976. In it, he effectively argued that it was the Victorians who began taking matters of intimate relations seriously. He credited them with passing a series of progressive laws and overseeing the emergence of sexology as a serious academic subject. Despite this and numerous other academic studies, the Victorians have struggled to shake off their reputation for prudishness.

1. “The naughty nineties” were the 19th century version of the Swinging Sixties, as Victorian men and women launched a promiscuous counter-culture

The Victorian era came to an end with the death of the Queen in 1901. Victoria’s death came at the end of the most sexually progressive decade of the era. Not for nothing were they known as the â€˜Naughty Nineties’. Far from being kept hidden, intimacy came to the forefront of popular culture. The artist Aubrey Beardsley, for instance, gained fame and notoriety, thanks in no small part to the suggestiveness and eroticism of his drawings. His art reflected the atmosphere of 1890s London, where decadence was on the rise.

It’s believed that the Naughty Nineties were a direct response to the moralizing of the preceding decades. Tired of keeping their desires secret, many men became more open about their lives and practices. Even prosecution didn’t deter the gay men of London from frequenting the growing number of gay clubs and cafes. Moreover, gentlemen who had earned financial independence as a result of the Industrial Revolution were keen to use their money for pleasure, driving the growth of a counter-culture, the likes of which would not be seen again until the 1920s and then again in the 1960s.

“Buzzkill: Vibrators and the Victorians.” Whore of Yore.

“Sex and Sexuality in the 19th Century.” The Victoria & Albert Museum.