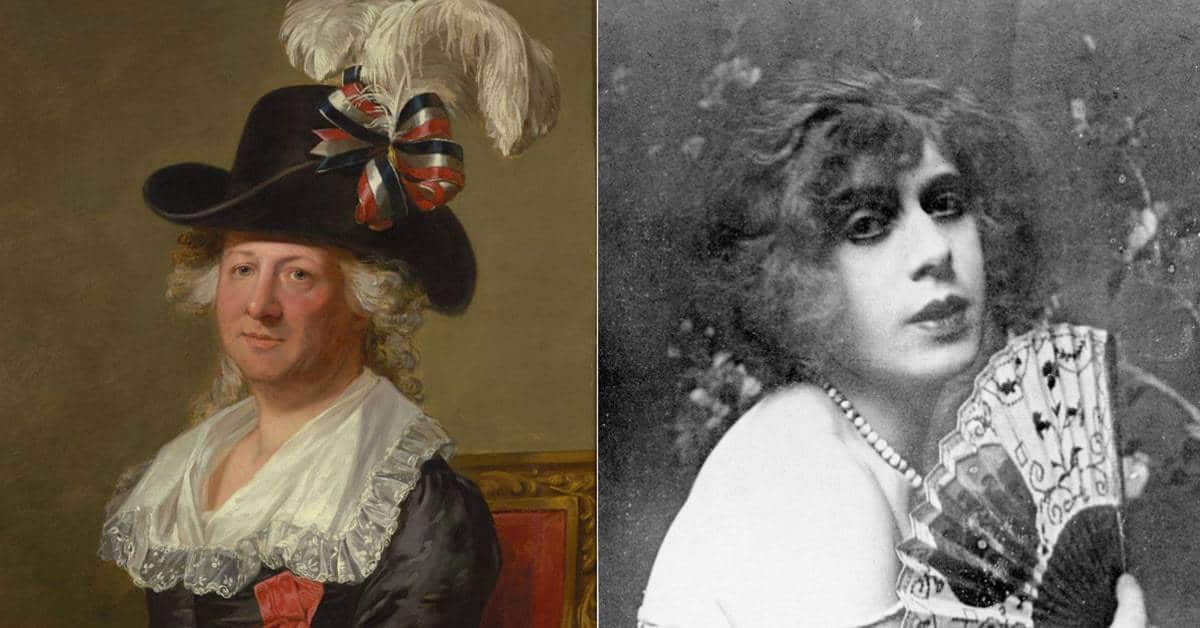 Christina Jorgensen was not the first American to have a sex change as is often claimed, but she was the first transgender person to announce her gender reassignment publicly- and to fight to make the transgender phenomenon better understood. Jorgenson was born in 1926 as George William Jorgensen, the second son of a Bronx carpenter. George was a shy, frail, blond, little boy who avoided rough games and fights. Jorgenson explained in later interviews that her childhood was happy. However, the onset of puberty led to the feeling she was a woman in a man’s body.

After graduating from high school in 1945, Jorgensen joined the US army and became a clerk. After her honorable discharge, having heard about European pioneers of gender reassignment surgery, she decided to make the transition from male to female. In 1950, aged 24, Jorgenson began taking estrogen under the supervision of Dr. Christian Hamburg. She chose her new Christian name in his honor. Then, in 1951, she obtained permission to start reassignment procedures in Copenhagen, Denmark.

The surgery transformed Jorgenson physically and mentally. She sent pictures of her new self back home to America with notes saying: “Remember the shy, miserable person who left America? Well, that person is no more and, as you can see, I’m in marvelous spirits.” When she returned home in 1955, her new outgoing self, coped well with the publicity certain tabloids stirred, up with, sensationalist headlines such as: “Ex-Gi Becomes Blond Beauty” and ‘Dear Mum and Dad, Son Wrote, I Have Now Become Your Daughter.”

After completing her surgery in the states, Jorgensen launched herself as an advocate for transgender people, speaking on radio and TV as well as on university campuses in the 1970s and 80s. The shy little blond boy was indeed gone. Jorgenson also became an actress and nightclub entertainer, often singing the song “I enjoy being a Girl” and inventing her own character “Superwoman” when Warner Communications demanded she cease dressing in a Wonder Woman costume in her nightclub act. She died in 1989 of bladder and lung cancer, having, as she put it given the sexual revolution “a good swift kick in the pants.”

Michael Dillon was born Laura Maud Dillon on May 1, 1915, the second child of Robert Dillon, heir to the Baronetcy of Lismullen. Dillon never felt comfortable as a girl. He disliked women’s clothing and excelled at sports not typically associated with females of the era. When at St Anne’s College, Oxford, he became president of the women’s boat club and won a university sporting blue for rowing.

After graduation, Dillon took a research job in Bristol. But his feelings of discomfort did not abate. In 1939, he consulted a local doctor, Dr. George Foss, who was using testosterone to treat extreme menstrual bleeding. Dillon asked for treatment to stop his periods altogether. Foss referred Dillon to a psychiatrist- who duly spread the tale all around Bristol. Dillon was forced to flee the city to avoid the scandal.

Dillon then worked as a mechanic, tow truck driver, and firewatcher during the Second World War. While on fire duty, he suffered an attack of hypoglycemia that hospitalized him. However, quite by chance, this allowed him to make the acquaintance of a sympathetic doctor and one of the world’s first plastic surgeons. The doctor performed a double mastectomy on Dillon and gave him a note so that he could become Laurence Michael Dillon.

Dillon’s surgeon recommended Dr. Harold Gillies, a specialist in genital reconstruction work as the best person to give him a penis. Gillies agreed- once he had dealt with his backlog of injured soldiers needed reconstruction work. In the meantime, Dillon enrolled in medical school.

Between 1946 and 1949, while still studying, Dillon underwent thirteen gender reassignment surgeries. He also wrote the first book about transgender identity: Self: A Study in Endocrinology and Ethics in 1946 which stated: “where the mind cannot be made to fit the body, the body should be made to fit, approximately at any rate, to the mind.”

Dillon was still restricted, however. He cultivated a misogynistic persona to put off girls as he did not want to be involved with a woman because he could not give them children. In 1951, after qualifying, he joined the navy as a ship’s doctor. However, he was forced to flee to India soon after, because of a discrepancy between Debrett’s Peerage (which listed him as a male) and Burkes Peerage (which referred to him as a female) led to the unveiling of his secret.

In India, Dillon found peace, as a Buddhist physician named Jivaka and wrote books on this subject. He died at the age of 47 when he was forced to leave India because of an expired visa.

Roberta Cowell was the first British transgender woman to undergo gender reassignment. She was born Robert Marshall Cowell in 1918, one of three children of Major General Sir Ernest Cowell, a prominent surgeon. At first glance, Robert seemed an average boy. At school, he was an enthusiastic member of the school’s motor club and at sixteen became an apprentice aircraft engineer. In 1936, he took his love of all things mechanical further, studying for an engineering degree and starting to race in several Grande Prix.

Cowell’s gender uncertainty revealed itself during the Second World War when she served as a British fighter pilot. By then married, she undertook several raids before being shot down and captured by the Germans. After two escape attempts, Cowell was moved to the prisoner of war camp Stalag Luft 1. In the camp, many of the men indulged in same-sex relationships; something Cowell avoided. She began to become paranoid about being seen as feminine and would not even play female parts in plays.

Once back home and demobbed, Cowell returned to motor racing and business. By now, she was suffering from depression and trauma. In 1948, she separated from her wife. After seeking help, the second of two psychiatrists helped her to discover how her “unconscious mind was predominantly female” and “feminine side of my nature, which all my life I had known of and severely repressed, was very much more fundamental and deep-rooted than I had supposed.”

By 1950, Cowell was taking estrogen, but still living as a man. Then she read Michael Dillon’s “Self: A Study in Endocrinology and Ethics“. The two became friends, and Cowell realized there was nothing wrong with changing her body to match the sex she identified as. Dillon performed Cowell’s initial castration, and then Robert officially became Roberta, completing her transition with a vaginoplasty in 1951.

Although Cowell enjoyed some publicity, she dropped out of the public eye after writing her autobiography. Then, in 1972, she reappeared when she gave an interview to justify her gender reassignment. Cowell explained it was perfectly acceptable to do so in cases like hers, as she had a chromosomal abnormality, XX male syndrome. However, in the interview she was less than sympathetic to other transgender men seeking to change sex, claiming if they had standard XY chromosomes reassignment surgery, would turn them into ‘freaks‘.

Sir Ewan Forbes of Craigievar, the 11th Baronet, was born Elizabeth Forbes-Sempill on September 6, 1912. At birth, Forbes’s sex was hard to determine with certainty because he was intersex. His parents decided to designate him as a girl because it seemed the best option for him. However, as Forbes grew up, it was clear this was a mistake.

Forbes preferred to play with his male cousins rather than his sister and dressed in boy’s clothes. He later recorded how he hated being made to dress up for social occasions in grand dresses. He even refused to be sent away to a girl’s school, so his parents had to educate him at home until he was old enough to attend a co-educational institute in Dresden.

After traveling Europe for a time, Forbes underwent one final humiliation- his ‘coming out’ as a society debutante in the late 1920’s. Then, after more travel, he decided to study medicine-which he self-funded as his father refused to pay for his further education, declaring there was more than enough for him to do on the family estate. In 1945, Forbes qualified- and finally began to live as a man.

By 1952, he had re-registered as a man and changing his name. A press release revealed that this strange change of gender was all due to “…a ghastly mistake. I was carelessly registered as a girl in the first place, but of course, that was forty years ago… the doctors in those days were mistaken, too … I have been sacrificed to prudery and the horror which our parents had about sex.

A month after his formal change of name and gender, Forbes married his housekeeper of five years Isabella Mitchell. However, in 1965, his elder brother died- meaning Forbes was now heir to the Baronetcy and a large estate. One of his male cousins challenged the inheritance, on the grounds of Forbes’ original gender. The case was held in closed court to save the family embarrassment but eventually found in Forbes’ favor because the initial determination of his sex was faulty. Ironically, as Forbes never had any children himself, his troublesome cousin eventually inherited his title and lands on his death in 1991.

Chicago Tribune – The Speedy Evolution of The Term Transgender

Them – How This 18th Century French Spy Came Out as Trans

The Independent – ‘It’s Easier to Change A Body Than To Change A Mind’: The Extraordinary Life And Lonely Death Of Roberta Cowell